Off the Page by Jodi Picoult and Samantha Van Leer

Congratulations to Clara Gillow Clark who won "Diary of a Waitress" off last week's blog.

*******
Fans of Between the Lines, a young adult novel that crosses back and forth between fantasy and contemporary fiction, will be happy with the recent release of Off the Page (Delacurte Press, 2015); the companion book which Jodi Picoult wrote in collaboration with her daughter, Samantha Van Leer. [Please note that the quotes I have selected below are from the audio book. Since I often listened while I was driving in the car, I did my best to quickly record favorite lines--when I was stopped at a traffic light or back home!] 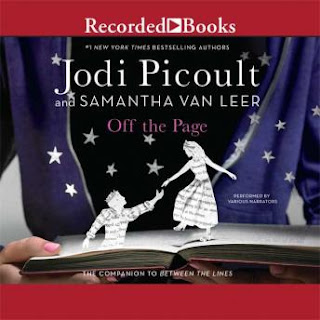 In Between the Lines readers meet Delilah, a teenager who has fallen in love with Oliver, a prince in a fairy tale. Through an amazing amount of persistence, romance, and a sprinkling of magic, the two successfully bring Oliver into the real world by having him trade places with Edgar, the son of Jessamine Jacobs (the fictional author of Between the Lines).

In this sequel, Oliver discovers some of the pleasures and pitfalls of American life that is far different from anything he has experienced in his fairy tale kingdom. He finds out that refrigerators don't magically restock themselves and real girls, like Delilah, get jealous when other girls at school crush on him. "I've been playing a role ever since I got here," he comments. "[But] I don't know how to be a teenage boy. I only know happily ever after." At one point he acknowledges, "Being in the book was so easy. In the script there were no apologies. I wish someone could turn the pages back."

Delilah on the other hand observes, "Who would dream that having my dreams come true would suck? Now I have to share him with the world." She thought he would be the outsider, but instead, "He is gaining in popularity and I'm the same. The longer he hangs out with the cool kids the less he'll hang out with me." She admits to becoming a jealous monster who she doesn't like.

Edgar, meanwhile, is caught inside Between the Lines. And since Delilah has the only physical/real copy of the book and she is busy keeping up with Oliver, the book never gets opened and he has no idea what is going on in real life. He observes, "Without a reader, the words just sit on the page, waiting to come alive."

I wish I could give the book an unequivocal five star rating, but although it's plotted and written superbly, I can't. When Oliver first comes to Delilah's school, he meets a guy who is gay. When others call him a "fairy" Oliver misunderstands and a scuffle ensues. The guy is head of the LGBT club at school which once explained, Oliver heartily supports. This character makes only a cameo appearance and it appears to me, was thrown in to make the book politically correct. The character offers no substantial contribution to the plot and I find his presence offensive.

There are many incredible lines about books, life, and play-acting in this multilayered and multi-point of view young adult novel. Picoult and Van Leer's collaboration have produced another fast paced romance.

Diary of a Waitress: A Review and ARC Giveaway

Diary of a Waitress: The Not-So-Glamarous Life of a Harvey Girl (Calkins Creek, 2015) by Carolyn Meyer chronicles six months in 17-year-old Kitty Evans' life. The time is 1926; a time when young women were expected to marry and have children with few aspirations beyond that. Kitty, on the other hand, plans to go to college to become a journalist. 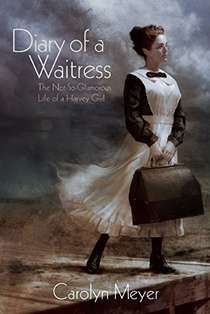 The books opens with Kitty's father's announcement that due to problems with his business, he doesn't have the money to send her to college. Left with this devastating news, Kitty impulsively decides to apply for a job as a Harvey Girl waitress. She is accepted and her life, working long days in the Harvey House Hotels and Restaurants, begins.


Although the book warmly shows Kitty discovering her own pathway to becoming a published writer, her colorful friend Cordelia, often steals the limelight. Cordelia is a flapper, a musician, and a young woman with enough spunk to return an expensive engagement ring from a man she doesn't love.

The "railroaders" young men who work at the roundhouse, and local ranchers, provide romantic interests for Kitty and her fellow waitresses, Emmy and Maggie. In the final chapter, when the women come together for a reunion twenty-five years later, the reader finds out the pathways that each women took.

I enjoyed the way Meyer brought the story to a close:


"What about you, Kitty?" Cordelia asked. "Are you still writing in your journal?"
I said I was.
"You should write a book about the Harvey Girls," she said.
"A novel of romance and adventure," Emmy suggested.
"A book about us," Maggie insisted.
I promised them I'd think about it.

Written in a diary format with black and white photographs of the real Harvey House Hotels sprinkled in, this novel will appeal to middle grade girls who enjoyed the American Girl series when they were younger. The hotels were built along the railroad lines and the book includes fun scenes where the waitresses take the trains and visit other hotels. With it's emphasis on historical accuracy, readers will be immersed in a time when waitresses were glad for a dime tip, and had to ask permission from their employer to go out on a date.

I am giving away my gently read ARC. If you would like to win it for yourself or the middle grade girl in your life, please leave me a comment by 6 PM on October 22. If you are new to this blog, make sure you leave your email address too.
at October 19, 2015 13 comments:

One Stop for Writers: An Online Library Like No Other 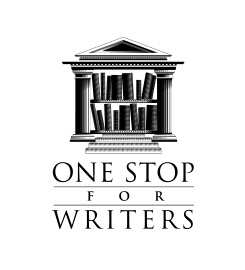 As writers, we know how much blood, sweat, tears and perseverance it takes to "birth" a book. Countless hours of research, writing, and revising are behind every well-honed book.

Every once in a while, something comes along that makes this process easier. I'm happy to share a brand new resource with all of you.

Last week, Angela Ackerman and Becca Puglisi, authors of The Emotion Thesaurus, (as well as other great writing resources listed below) and Lee Powell, creator of Scrivener for Windows, unveiled their new powerhouse online library, One Stop For Writers. It is filled with one-of-a kind descriptive thesaurus collections, tools, tutorials and much more. Each one is geared towards providing the resources you need to strengthen your prose and help you write more efficiently.

For more information, please go to Writers Helping Writers (which by the way, is a terrific blog that you should subscribe to. Their weekly posts are outstanding). Find out about One Stop and sign up for prizes. There's even a 50% coupon for any first time subscriber.
Here's another link to their time-worthy blog.

To whet your appetite, here are some of the resources you'll find there: 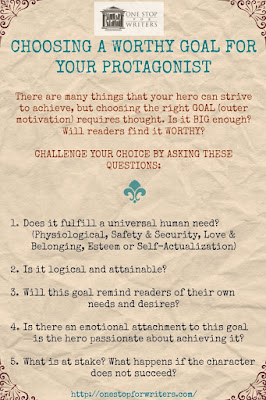 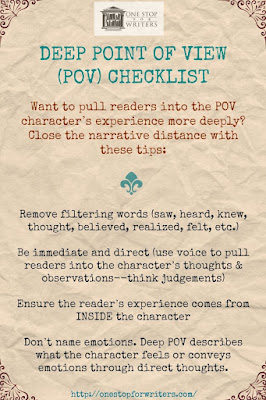 Go to their Pinterest boards for more freebies and to their Dark Writing Prompts  for, well you can guess what you'll find there.

And check out this fun video!

The internet writing community is a very generous place. Thank you Angela, Rebecca and Lee for being outstanding examples.
******
For more writing resources, here's a list of books co-authored by Angela and Becca:

When my children were young, I enjoyed purchasing autographed books at writers conferences and bringing them home for birthday or holiday presents. Fast forward a few years, and now I'm purchasing books signed for my grandkids.

At the mid-year SCBWI workshop in Florida, I complained to Kim Britt, proprietor of bookmark it, that I couldn't decide which grandchild I should buy books for.

In a moment of inspiration she said, "Start a cousins club! Buy a book and then let them pass it around to each other."


She got excited explaining how I should create a pocket in the back of the book.  Each cousin could sign, date, and write what she thought about the book and leave her comments in the pocket before passing it along.

Kim's idea led to the first book dedicated to the Cousins Club by Sara Pennypacker, author of the Clementine books and The Summer of the Gypsy Moths. 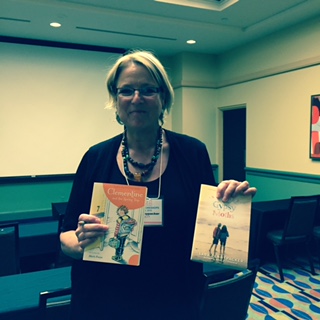 And here is the first cousin to receive books:

At a recent SCBWI-Carolinas conference I asked Alan Gratz to sign The League of Seven to the cousins, which he was happy to do. 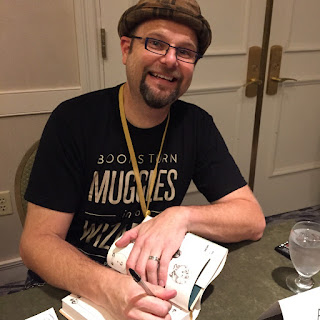 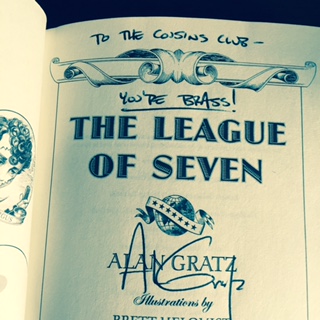 Using rubber cement, I glued this pocket into the back of the book: 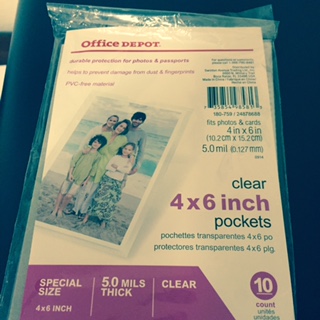 Make sure the cement thoroughly dries before you insert a note (or index card) into the pocket. 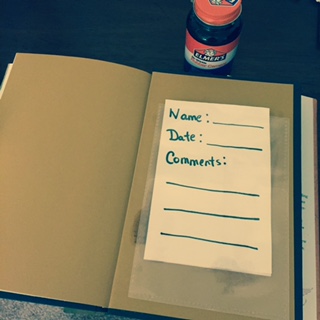 If you also love sharing autographed books with the young readers in your family, I hope you start your own Cousins or Sibling Club. Send me pictures if you do. I'd love to run a follow-up post on more clubs, thanks to Kim Britt's novel idea.
at October 05, 2015 15 comments: