Congratulations to Jolene Guiterez (second week in a row!) who won a copy of The Teacher's March! For those of you who didn't win, here's a second chance! Jolene is adding to her school library, book by book.

As promised on Wednesday, here is my bonus post taking you behind the scenes with Sandra Wallace and Rich Wallace, authors of The Teachers March! 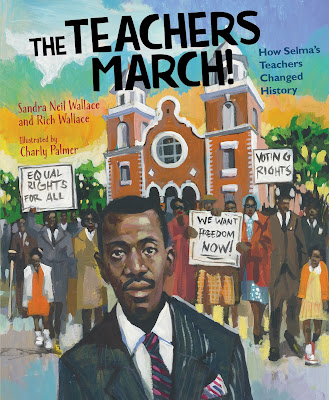 Carol: How did you find this story? Was it while researching the time period or other individuals involved in the civil rights movement?

Rich and Sandra: Yes, Joyce Parrish O' Neal, whose mother (Too Sweet) participated in the Selma teachers’ march, told us about it while we were interviewing her for a previous civil rights book (Blood Brother: Jonathan Daniels and His Sacrifice for Civil Rights).  We’d been discussing Martin Luther King Jr.’s presence in Selma during the Selma to Montgomery march when she mentioned that he’d been there back in January of 1965 to encourage Black citizens to march and returned to applaud the teachers for making history with the teachers’ march. The fact that so few people knew about this crucial event—including us--really opened our eyes. We set out to interview as many of the teachers and their family members as we could.

Carol: I’m in the process of hosting another collaborative team on my blog and so I’m curious about your collaboration process. How do the two of you work together? Assign jobs, come up with a joint vision, etc.

Rich and Sandra: We always start with a topic that has a strong appeal for us both—usually that means little-known people who have broken barriers and changed the world but their stories have been lost to history, and we really want kids to know about them. Then we read everything we can get our hands-on. In the case of the teachers’ march, primary sources were spare. There were some recollections in slim chapters of civil rights books, and brief, local newspaper coverage, which discriminated against the teachers and portrayed them as trouble-makers, and some New York Times coverage at the time. But the teachers’ march was quickly overshadowed by national coverage that followed subsequent events. John Lewis was beaten leading a Selma march a short time later (notoriously known as “Bloody Sunday”); then Lewis and MLK led the historic march from Selma to Montgomery right after that. The teachers’ march—which set those more famous events into motion—was almost forgotten.

So, we set right into the second phase of our research, which is visiting with the key players, being with them at the location of the history-making event, and chronicling their memories through interviews and oral histories. Those first-hand accounts are vital not only for context, primary source information, and voice, but to humanize history. Learning about the dangers they faced and what was at stake helps us honor their courage and create connections across human experiences. For The Teachers March! we made several trips to Selma and did our interviews in person.

For our books on subjects that are further back in history (Bound by Ice was from the 19th century, for example) we rely on journals, letters, newspaper articles with quotes, artifacts, and other contemporary material.

When we finally start writing the manuscript, we do tend to “assign” certain sections to each other (or more likely, we volunteer). We serve as each other’s editor and hold each other accountable to the storyline and to the narrative voice.

Boyds Mills Press & Kane is generously providing another copy of A Teachers March! to one of you. Please leave a comment by September 15 (with your email address if you are new to my blog) for a chance to win. 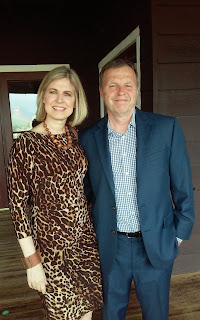 Investigative journalists Rich Wallace and Sandra Neil Wallace are a husband-and-wife team who write books together and as individuals. They are the co-founders of The Daily Good, a nonprofit dedicated to literacy, food security, inclusion, and health in their city of Keene, NH. Sandra’s picture book Between the Lines: How Ernie Barnes Went from the Football Field to the Art Gallery, was presented the 2019 Orbis Pictus Award for Outstanding Nonfiction by the National Council of Teachers of English. Rich’s many novels include award winners such as Wrestling Sturbridge and Playing Without the Ball. Visit them at sandraneilwallace.com, richwallacebooks.com, and DailyGoodNH.org
at September 12, 2020

I love this behind the scenes reporting, Carol, and the book is wonderful. If I were still a teacher, it would be on my shelf for sure.

Thanks, Linda. Even if you're not a teacher, it's a book to have and share!

A timely bit of history most people don't know about. Teachers change lives in many ways.

Lois, I want to include you in the giveaway but I need your email address!

I can't wait to read this book, especially knowing how well researched it is. This topic is an important one and I do enjoy reading about less known people who have made a positive difference in the world.

Thanks, Danielle. You're in!

Thanks, Carol. I'd love to be included in the giveaway. My email is

Thanks for leaving me your email address, Lois

Dear Carol,
Thank you. Don't put my name in the hat. I'd like someone else to win. Just wanted you to know that I appreciate your blog and your reviews of great books.

I enjoyed the interview!
turtle6422 at gmail dot com

This looks like a really important and interesting book. Thanks for telling ma about it. I will pass on the giveaway since I recently won a book here.

Thanks, Joan and Jana Leah for leaving comments. I appreciate knowing folks are reading my blog!

I would love to win this book to share with the students in my elementary school library. Loved reading the interview with the authors, and learning how the book came to be. It is good to learn about these important events in history.

Thanks, Gwen. You're in! It would make a great addition to your school library.