JACKIE AND THE MONA LISA- PART I: An Informational Picture Book Review and a Giveaway!

When Jackie Kennedy became the First Lady in 1961, everyone loved her, and everyone wanted to be like her. In turn, Jackie wanted everyone to love art and culture as much as she did. JACKIE AND THE MONA LISA (Sleeping Bear Press, 2022) is a new picture book biography that shows how with "sway, style and persistence" Jackie was able to accomplish her goal. Written by author and teacher Deborah Robin Murphy and illustrated by Jen Bricking, this delightful book will be enjoyed by children from grades 1-4-- as well as their grandmothers who remember Jackie! 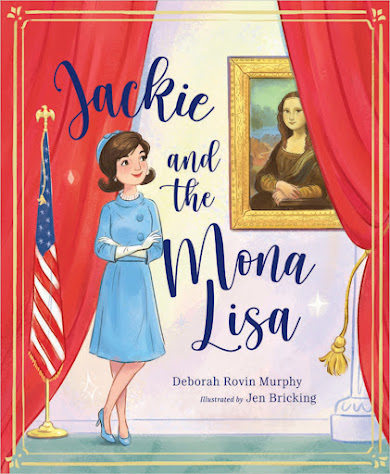 As many other picture book biographies do, Jackie and the Mona Lisa begins when Jackie is young. She visited the White House for the first time when she was eleven. 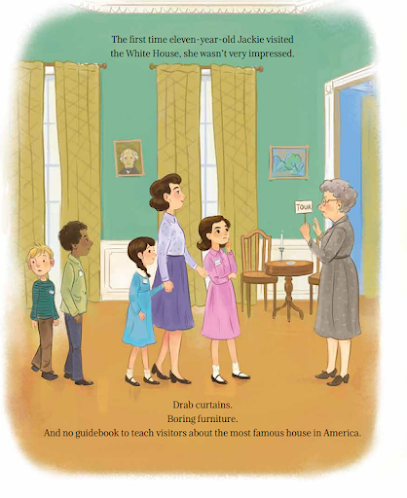 When Jackie arrived as First Lady many years later, she's disappointed that not much has changed. Same boring rooms and still no guidebook! "The White House was supposed to be a symbol of American history, but the rooms weren't historical at all."
So, Jackie went on a hunt. 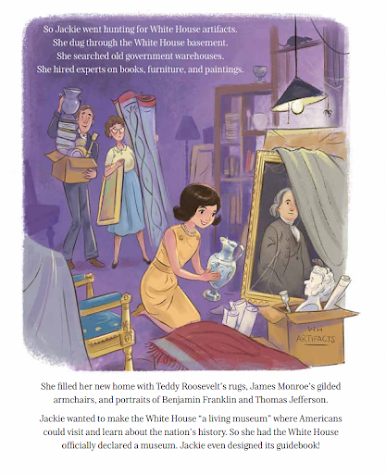 One year later, Jackie went on television and showed the American public how she had filled the White House with American treasures.
But that wasn't enough. Jackie wanted to introduce Americans to living treasures--ballerinas, actors and actresses, and musicians. She showed "the whole world that American had inspiring art and culture." 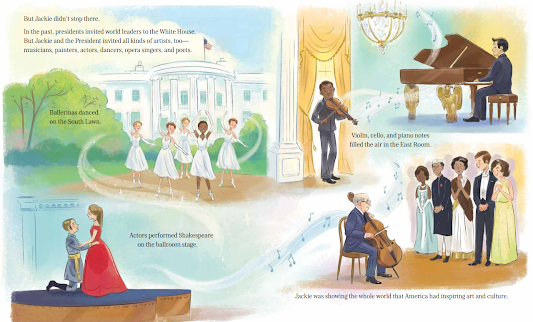 But Jackie still wasn't satisfied. She wanted people to see art in person...she wanted them to "be inspired in the same way she was" by great artistic masterpieces.
She decided to bring the Mona Lisa to America!
Jackie traveled to France and talked with the man in charge of the country's treasure. Much to the chagrin of the French, he said yes! 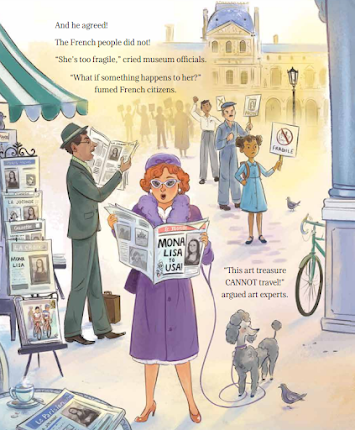 With every precaution possible, the famous painting was boxed up and transported by ship to the States. It was even escorted by a secret service agent when it rode in a special truck to Washington, D.C.!
Jackie was thrilled to share it with the American public and visitors flocked to the National Gallery of Art to see the famous painting.
The painting was met with crowds and Mona Lisa mania wherever it was exhibited. 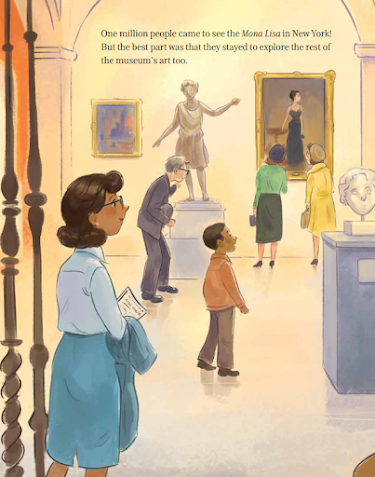 In the end, Jackie Kennedy accomplished her dream. She not only brought a famous painting to the United States, but she continued to make art important to all Americans.

From the creation of the Kennedy Performing Art Center to helping preserve historical buildings like Grand Central Station to becoming a book editor...she continued to invite others to see the world as she did--a museum of wonder and beauty...if you just knew how to look!

For a chance to win this book, leave a comment with your email address, or send me an email if you prefer. If you follow my blog you get another chance. Come back on Friday for an interview with both Deborah Robin Murphy and Jen Bricking--and another chance to win this witness to Jackie Kennedy's flair and influence! Giveaway ends Monday, March 21. U.S. addresses only.

I never knew this about Jackie Kennedy. She brought so much to the American people and I can't wait to read this book. Thank you for the chance to win a copy.

This book looks great, think my twins would love it!
Please add ZacharySnyder@gmail.com to the list of entries, and I follow your blog though the RSS feed.

You got it, Zachary!

John F. Kennedy and Jackie Kennedy were my heroes. Oh my goodness! What a nifty book!
Please put my name in the hat for a chance to win this book.

Oh, I love this! Enter me, please! Congratulations to Deborah!

As a child who sported a “Caroline Kennedy” haircut in the early 60s, I am always intrigued by stories of the Kennedy family. It’s nice to read a new-to-me tidbit. Thanks! Joyce jpuglow@gmail.com

This book sounds so interesting! Thanks for introducing me to it, Carol!
Amy (amysase@gmail.com)

Thanks, Amy. Your name is in the hat!

What a fascinating story! I’m looking forward to reading the whole book. beckyscharnhorst@gmail.com

Thanks, Becky. Your name is in!

I was just little when my mom explained to me what Mrs. Kennedy was doing for the arts. I would love a copy of this book!

Thanks, Barbara. You’d love this book!

Having lived through the Kennedy era, I really enjoyed your blog post about this book. I knew of Jackie's interest in art and watched her tour of the White House but don't remember knowing about how drab and uninviting the White House was before her makeover.

What an interesting look at the influence Jackie brought to the world.

I'd love a copy of this book and look forward to hearing from the author in your next blog.

Thank you! What a precious nugget of history.
terriamichels@gmail.com

What an interesting tidbit of history! I'm excited to read the whole book! I love learning fascinating little-known nuggets of history.
skeerswriter@gmail.com

Thank you for dropping by, Linda. Your name is added !

Thank you for sharing this wonderful book with us. I grew up when President Kennedy and Jackie were in the White House. I knew she loved art, but I didn't know all of these details. I would love to read this book and share it with some young people I know. Thank you for offering a giveaway!

Thanks, Esther. You’re in twice!

Wow. This sounds like an amazing book. I love books that focus on some small detail in a famous person's life. I will be looking for this one. Thanks for the post.