I discovered Freak the Mighty (Blue Sky Press, 1993) and The Reinvention of Edison Thomas (Front Street Books/Boyds Mills Press, 2010) when I was preparing for recent workshops at NCRA. Both books feature strong boy protagonists and include science and math elements. Conventional writing wisdom is that the first few lines of  a story should grab the reader. Consider this opening paragraph:
I never had a brain until Freak came along and let me borrow his for a while, and that's the truth, the whole truth. The unvanquished truth, is how Freak would say it, and for a long time it was him who did the talking. Except I had a way of saying things with my fists and my feet even before we became Freak the Mighty, slaying dragons and fools and walking high above the world.
From there, Rodman Philbrick, the author, leads readers through a story of two boys who individually confront traumatic pasts as well as struggle day-to-day with their disabilities. Maxwell is a huge 7th grader who is diagnosed with a learning disability; his father killed his mother and is prematurely released on parole. Kevin is a genius dwarf with Morquio Syndrome; his father also abandoned him and his battle is against time and the limitations of his diseased body. Together they become an inseparable team.
With Kevin riding high on his shoulders, Maxwell learns he not only can "slay dragons," but defeat town bullies and overcome his fears about his father and school. Kevin finds an invaluable friend who loves and respects him.
Philbrick weaves their stories together masterfully. I love the voices of the two characters, the layers of meaning, and how Philbrick brings us a story about friendship and acceptance, as well as about death and healing.  ﻿
﻿ 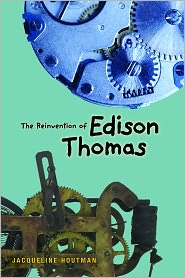 Like Kevin, Edison Thomas is also a boy genius with a problem. Here is the opening:
﻿Eddy sat on the steps outside Drayton Middle School, where the noise from the science fair in the gym still roared in his head. Tiffany always told him to picture a calm place when he felt stressed....
Tiffany's strategy wasn't working; his heart was still beating too fast. His body would have to be under control for him to go back into that gym full of people...
New calming strategy: think about the science fair project.
The author, Jacqueline Houtman, has begun to paint a picture of a middle school boy who has Asperger's syndrome. Eddy has a million scientific facts at his fingertips but is unable to relate socially to his peers and is happy in his own world of experiments and science. The book is full of personal conflicts: disappointment when his science fair project does not win first prize, not understanding why his former friend Mitch now teases him, and obsessive fears over children being killed when a crossing guard loses his job.
Two turning points occur that change things for Eddy. When he figures out how to stand up to Mitch's bullying and when he accepts the friendship of two other scientifically-minded peers, Eddy's life begins to change. Houtman, provides the reader with a satisfying ending when Eddy is allowed to compete at the regional science fair, but realizes that he no longer needs to win it - he has already won some major battles in his young life.
****************
By the way, both books have great appendices that add much to the the books' content.

I love Freak the Mighty, but I didn't know about Philbrick's book, The Reinvention of Edison Thomas. Thanks for sharing!

I adored The Reinvention of Edison Thomas. Have been telling many, many people about it. I'm thrilled you featured it. Now I look forward to reading Freak the Almighty. Thanks so much for posting about these books.

Bonnie, I think you were the one who told me about Edison Thomas in the first place.
Clara, welcome aboard!Edison Thomas was actually written by Jacqueline Houtman.

Thanks for these great reviews, Carol. I'm adding them both to my "must read" list.

ooooh! I'm sharing this with you know who. :)

Great, Donna! I had Katie in mind!

Yeah, I am going to blog about this post on my blog tomorrow

thanks, Lizzy. I hope to hear from some kids soon!!