The Good Braider: A Review and a Giveaway

When Tracey Adams of Adams Literary recommends a book, I listen.  As a result, when I was given the opportunity by Recorded Books to listen and review the book Tracey recommended,  the good braider (Skyscape, 2012) I jumped at the chance. For one fortunate blog reader, you'll be glad that I did. Following this review you'll find directions on how to win this beautifully produced audio CD, narrated by Cherise Boothe. Written by Terry Farish, the good braider was selected in 2013 as the Bank Street College of Education Best Book of the Year and a book of Outstanding Merit. You can find the study guide here; Farish has donated this book to the Worldreader program. 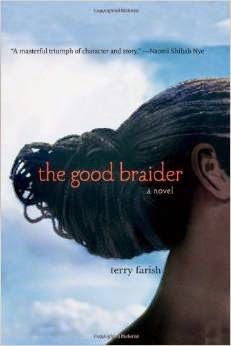 South Sudan. A nation torn by civil war as well as religious and ethnic conflict. The country from which Viola and her mother escape to the United States. The story told poignantly in free verse, is captured in this trailer:


Viola's father is a rebel soldier who has been gone for five years and she lives with her beloved grandmother, mother, and younger brother, Francis, in Juba. Their lives are full of two enemies: the Sudanese soldiers who rape women and kill young boys or conscript them for the army, and poverty. Yet the family are embraced and loved in their community.

Mother's Day has never been a big event at our house. But as it came and went two weeks ago, I remembered that last year I gave my mother a little Mother's Day book. At the time, I suspected it would be one of my last Mother's Day gifts to her. I was right.

My mother has been gone for seven months and it has taken me this long to be able to share with all of you what I said at her graveside. This is in Margaret Federlin's honor-- as well as for all of you who nurture children and grandchildren.  Your gifts of time, inspiration, and encouragement are priceless.

"Two weeks ago my mother and I started looking through old photo albums. We looked at more recent ones of my children, and also ones of her and my father in their earlier years. I found an half-empty album that had an envelope stashed in the back full  of pictures that my father had taken of her paintings. We decided to fill up the rest of the pages with these pictures. As we did, it struck me how much she painted (even until the week before she died she was still talking about the paintings that she was thinking about and planning), how many pictures she had given away, and how much people enjoyed her artwork.

"I asked her if she was disappointed that none of her children had inherited her artistic talents. She said no, she was confident that each of us was following our own interests and passions.

"I have thought often that one of my mother’s gifts to me was her saying to me when I was about 10 or 12, 'You have a way with words.' Her belief in me has continued unabated into my adult years even as I told her about my struggles writing my first novel. In some ways, she has been my biggest fan. I will miss her being in my corner, rooting for me and encouraging me to persevere. But I have her words, her voice, and her belief that I can do 'whatever I set my mind to' inside of me now, and I will never lose that.

"I was privileged to have had both my parents live nearby for the last years of their lives.  I think it was Charlotte’s warmer climate—compared to upstate, NY or Milwaukee that drew them here—but my life has been richer as a result. But for Tom and Barbara, I want to tell you that I can’t tell you how many times she said to me, 'I am blessed to have three wonderful kids.'

"About a month ago she said, 'I have more than I anticipated. I didn’t think I’d live to be so old, have so many friends, be so happy and be satisfied.' She said she wanted to be remembered as a 'someone who loved her family, her children, and her life.'


"Every inch of wall space in her room at the Stewart Health Center was covered with her paintings. 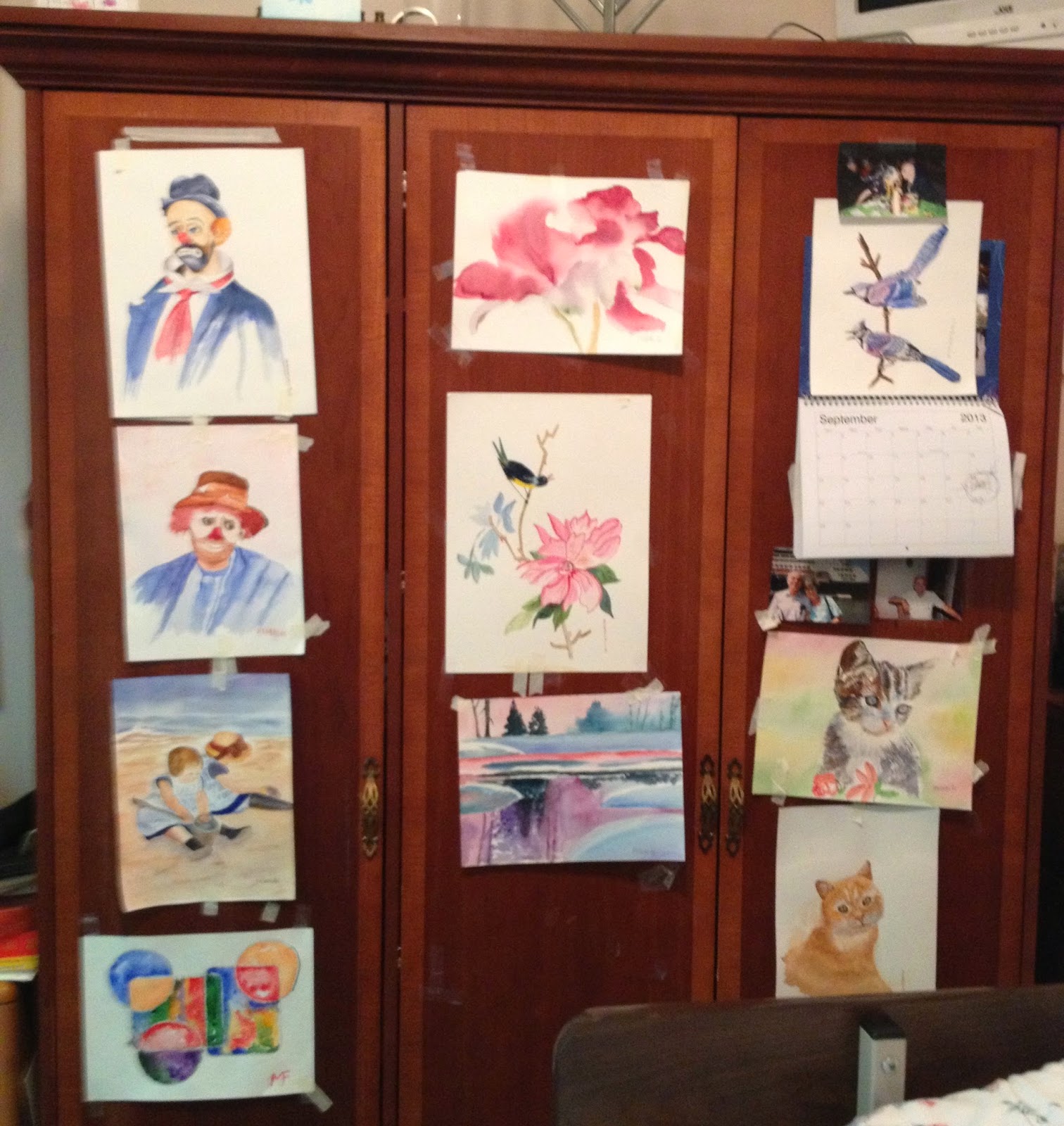 Family members and friends will treasure them for years to come. 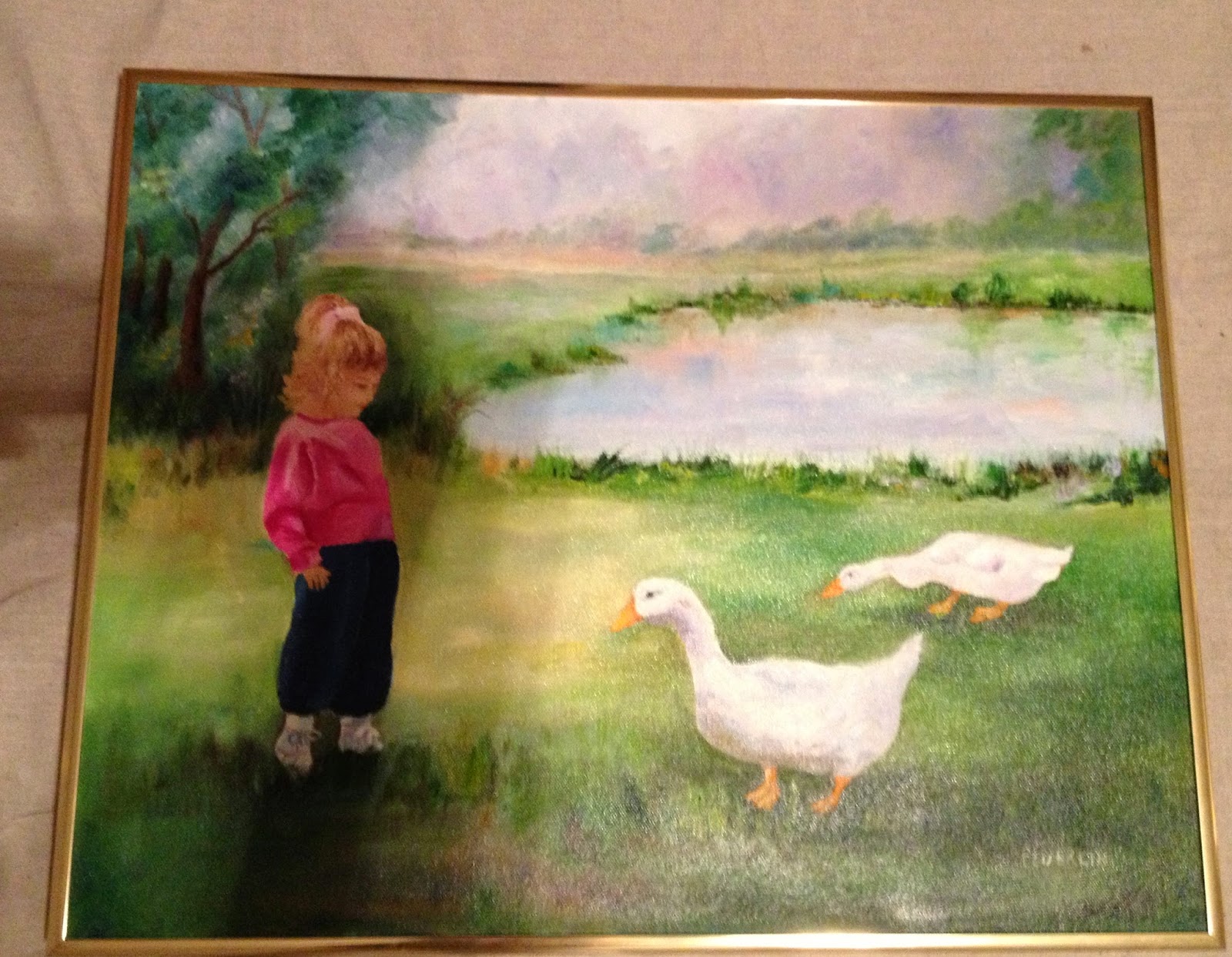 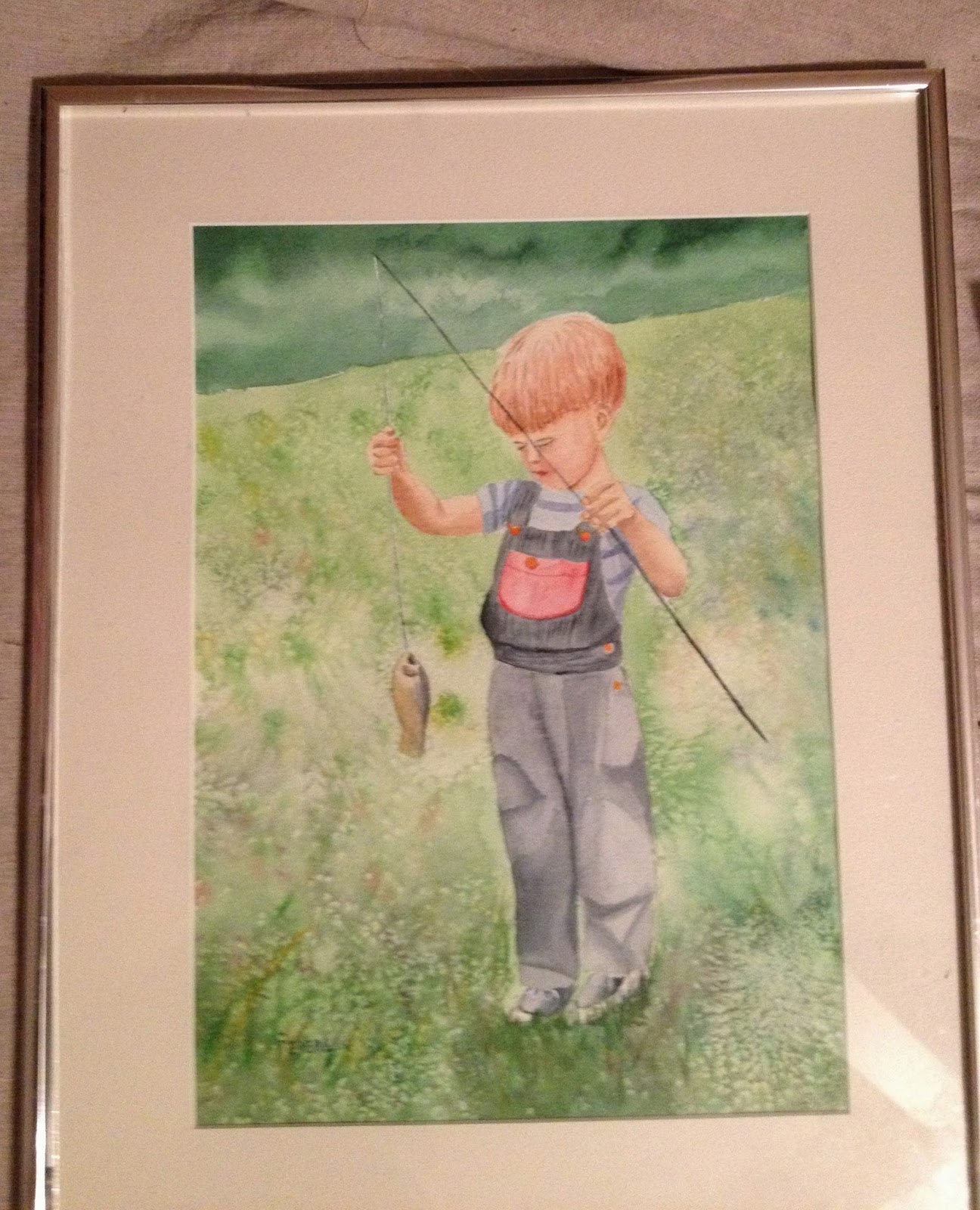 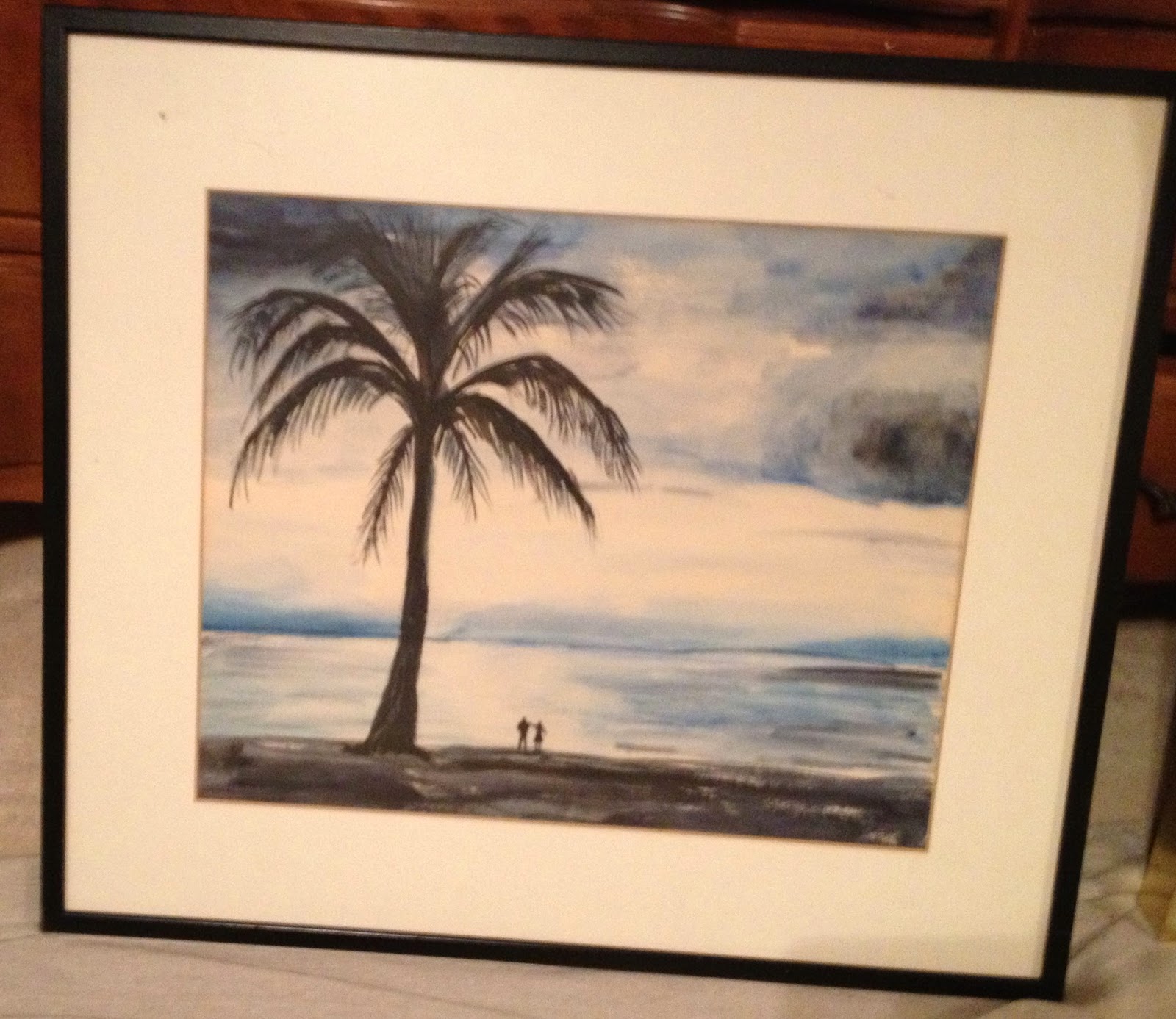 Hung in Tom Federlin's room growing up
Given to him, 2013
"Her artwork is most certainly part of her legacy to us. But as her children, we also can treasure her other gift to us: a simple belief that we were important, special, and very much a part of the reason she was thankful to 'get out of bed' each day."

Where are the People of Color in Children's Literature? An Answer from Vanessa Newton

*********
Congratulations to Vanessa and Debbie Levy for winning the 2014 Honor Award given by the Jane Addams Peace Association.

Congratulations to Deanna Klingel who won Christy Allen's book, Samantha Green and the Case of the Haunted Pumpkin.

**************
As my faithful blog followers know, I enjoy giving away books, recommending well-written books, and sharing updates on my own WIP Half-Truths.

But my favorite post is when I announce an author landing an agent or a book deal. This post inaugurates a new series I am creating: "You Heard it Here First." I look forward to adding posts as I share more authors' news in the future.
I am very excited to introduce you to Miriam Spitzer Franklin, a hard-working writer who was one of the original members of the SCBWI Charlotte critique group. I have watched from the sidelines as Miriam has persevered and didn't give up on a story that she believed in--and that I loved! I'm pleased to announce that EXTRAORDINARY, her debut middle grade novel, will be published by Skypony Press in Spring 2015.

Take it away, Miriam!

Carol: Tell us about your book. What prompted you to write it?
Miriam: EXTRAORDINARY is about ten-year-old Pansy Smith who vows to become an extraordinary person after she learns her best friend Anna, who hasn’t been the same since a brain injury at summer camp, may soon be cured. Because the girls’ last words to each other were angry ones, Pansy wants to make it up to Anna by becoming the kind of best friend that Anna deserves. Although the subject matter is heavy, much of the book is humorous as Pansy formulates an elaborate plan to reach her goals, persevering in the face of many challenges.

I started with Pansy’s character, a girl who seems mostly average in every way and wants to become an extraordinary person. I knew that friendship would play an important role, and I was inspired to write Anna’s character because of my niece, who had meningitis at age two and suffered a stroke and permanent brain damage. At first, Anna’s brain damage took place five years before the story started because I thought it would be too sad otherwise. But eventually I realized if I wanted the story to work, Pansy’s emotions needed to be a large part of it. In my last revision, Anna gets sick a few months before the story begins.

Carol: I personally know you have had a long journey towards publication. Can you share how many years you spent writing and revising it?
Miriam: This manuscript has been through so many revisions and rewrites I’ve lost count! The first version ended up in a drawer for years while I worked on other projects. Many of my original readers said it felt like two separate stories--one about Anna and one about Pansy--that weren't connected. One day when I wasn’t even thinking about it, the solution came to me out of nowhere and I knew exactly what I needed to do.

Originally, Pansy’s motivation for becoming extraordinary wasn’t clear. In order to link the two storylines, I changed it so that Pansy wants to become extraordinary BECAUSE her friend is going to have surgery and she wants to prove she’s the kind of friend Anna deserves. In my rewrite, the story lines become linked together on the first page when the reader finds out what Pansy’s motivation is for the change.

I revised again before signing with my agent, after the first round of subs, for a revision request for an editor, and one last time before subbing my final round.

Carol: How did you find your agent?
Miriam: Finding an agent was the only thing quick in this process for me, and different from books I’d subbed in the past. This time I posted a query letter on the Blue Boards (now SCBWI boards) for feedback, and received a request from my agent before I’d even sent out any queries. She requested the full within a week, a revision request two weeks after that, and I received the call a week after that.

Carol: What role your agent took in getting this publisher?
Miriam: I’m the one who suggested subbing to SkyPony Press. I saw that they were interested in books with special needs themes. It took them a long time to read the manuscript, though the editor, Julie Matysik, kept checking in and saying she was still interested and would get to it soon. Eight months after my agent sent the book out, Julie responded with an enthusiastic “I love this book!” and an offer.

Carol: What have you been asked to do for marketing?
Miriam: My editor has sent an author’s guide with marketing suggestions. I’m starting by setting up an author’s website; I’ve also been strongly urged to set up an author’s FaceBook page or a Twitter account. I’m interested in setting up school visits once the book is published since I’m a former teacher and more comfortable talking to groups of kids than groups of adults! But it seems most of this can wait until the cover is designed and the catalog goes out in the fall.

Carol: What's next?
Miriam: I have two other completed middle grade manuscripts as well as a younger middle grade, still in progress. Although I’m focusing on my debut right now, I’m hoping my editor will take a look at one of my other manuscripts when we’re finished with revisions.

Congratulations to Miriam who persevered, wrote, and rewrote. I can't wait to see this book in print!
at May 06, 2014 19 comments: