This has been a fantastic day! I just received word that my proposal, "Learn from the Masters: How Creating a Fictional Character Enhances Reading Instruction" was accepted for the 2008 IRA convention in Atlanta, next May. This is quite an honor, particularly for a new author like me. On top of that, my article "Show, Don't Tell: Classroom Activities for Image Driven Writing" was accepted for a forthcoming issues of Middle Ground. As if that wasn't enough, my editor told me that my blog (the one you guys are helping to make popular) was rated 42 out of 150 useful, educational, and inspirational blogs for writers.

I'd include a video of myself jumping up and down in celebration (a la' my first attempt at Zumba yesterday) but I'll spare you that unnecessary visual litter!

Things that make a writer excited 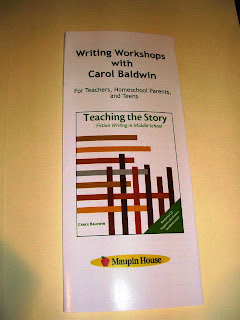 My new brochure just arrived and it looks superb! If any of you are looking to have brochures printed, I'd highly recommend Willy Walt Printing services. They were fast, economical, and very professional. How fun!

For those of you who were unable to attend the SCBWI/Emrys conference this past weekend in Greenville, I thought I would share some highlights. It is impossible to recreate the jam-packed Saturday, but here are a few gems:

Email ThisBlogThis!Share to TwitterShare to FacebookShare to Pinterest
Labels: SCBWI, writing for children

Since I am such a fan of books on CD, I was happy to read local teacher and columnist, Kay McSpadden, tout the merits of audio-books in the Charlotte Observer on August 11. As readers of this blog know, I'm a big advocate of reading books this way—since (unfortunately!) my time seems too limited to be able to sit down and read--as much as I love books. After McSpadden heard Jim Dale, the actor who has read all seven of the Harry Potter books for audio-books read, she wrote:

"…Before they are readers, all children learn by listening, and audio-books such as the ones narrated by Jim Dale can be a gateway to literacy. Granted, Jim Dale is a talented impersonator and mimic who has spent great care making each character's voice in the Harry Potter books distinct, and the Harry Potter books are so compelling that most fans read them more than once. But even an average parent reading a simple bedtime story aloud is giving her child practice in listening, memory, vocabulary, and imagination--skills that lead to fluency in reading later on."

Her column went on to discuss how TV watching has replaced reading and imaginary play—both so necessary to creative childhood development. She quoted a University of Washington study which indicated that, "For every hour per day spent watching videos targeted to them, babies had six to eight fewer words than babies who did not watch the videos."

She went on to say that many students who are considered reluctant readers might be hooked into reading by first listening to a story. Storytelling has been around since time began and well told stories, as McFadden concludes, speak to us all.

And speaking of audio-books…I look forward to telling you all about my latest great read: Peter Pan in Scarlet.

Email ThisBlogThis!Share to TwitterShare to FacebookShare to Pinterest
Labels: book on CD

The Higher Power of Lucky

What child doesn't fantasize about running away in order to get the attention that he or she deserves? And what child hasn't worried that their mother/father/guardian/caretaker is considering leaving because of something the child fears he has done wrong? These themes, like the beautiful knots that Lucky's best friend, Lincoln ties, are intertwined throughout this 2007 Newberry Award winning book by Susan Patron. Through the course of this short book, 10-year-old Lucky also comes to grips with her mother's death and her father's abandonment. I found the description of Lucky hiding new thoughts and observations into different "crevices of her brain" to be poignant and true-to-life. Which one of us hasn't been confronted with a new reality without filing it in our mind to "think about later?" This would be a good book to use in a classroom to show how an author shows not tells characters and setting; the picture of this tiny town at the edge of the desert is outstanding.

I would recommend this book for readers 10 and up, although some parents may object to the use of the word "scrotum" on the first page. The word within the context of the story is just another part of adult life that Lucky is learning about. For comments about the book, you might want to read the review written by the New York Times which presents some interesting thoughts on authors and censorship. (Simon and Schuster, 2006)

For those of you who like me, can never find enough time to read, a friend recommended that I label the books which I review here that I have found on CD's. I went back and added that as appropriate and so now you can search for them under "Recorded Books." Hope this helps.
at August 07, 2007 1 comment:

I recommended this book to a friend who is writing a story through poetry and she recommended it back to me; now I'll recommend it to all of you. This is Tracie Vaughn Zimmer's second book of poetry (Sketches from a Spy Tree is for a younger audience) and both show a great grasp of language through terrific imagery and word choice. I can't help it. I'm a sucker for word pictures and this book is full of them! Savor this segment from the final poem, "reaching:"

to show its pale heart."

Although this is a story of a young teen coming to grips with cerebral palsy, Zimmer doesn't hit the reader over the head with that theme. Instead, the main character grapples with all of the normal angst which middle school students face: acceptance (or the lack thereof) from peers, gaining and then feeling like she has lost a new best friend, disappointment in a mother who doesn't seem to understand her, and fear over losing her beloved grandmother, to name a few. I highly recommend this book for readers in 5-7th grade.

Since I'm in the middle of working the kinks out of writing a juvenile historical fiction novel, I'm impressed with Walter Dean Myers' ability to convey a sense of history and place, through a believable character living in Harlem in 1925. Both boys and girls will enjoy reading about the "life of crime" that Mark Purvis inadvertently slips into—and will cheer along with him when he finds his way out. I would recommend this Newberry Honor Winner for students in grades 5-8. Check out this interview with him for background information on where he gets ideas for his stories, his feelings about poetry, his relationship to his family, and more. (Scholastic, 2007)

P.S. The back of the book includes a pictorial directory to the "real" people and places in Harlem Summer. This is an added bonus for kids (like mine) who always want to know what "really" happened.