When "The End" is Only the Beginning

I’ve been composing this blog in my mind for days. But I told myself I couldn't actually write it until I'd reached "The End."


Lately I've been spending days pushing through the first draft of my WIP (work in progress), Half-Truths. These have been days of sitting down at the keyboard and feeling worried because I only had a vague idea of what might happen next. Days of looking up two or three hours later and being amazed that I’d written another chapter.
At the end of October I’d written 19 chapters. Challenged by two SCBWI friends, I decided to try and finish during NaNoWriMo. I wrote 20 chapters in 20 days. But my story wasn’t done.
My new goal became to complete this draft by the end of 2010.
When I wasn’t writing, I was thinking. Thinking about how I wanted the story to end. Thinking about how I was going to get my characters to that point. And wondering if I could I make it happen by New Year’s Eve.

When I first started this novel I wrote tight. I started each day by revising what I’d written the day before. I researched facts as I wrote. I tweaked adjectives and verbs. I was very slow. A chapter could easily take a week to write. Sometimes longer.


But in November my method changed. I learned about writing loose first drafts by reading Becky Levine’s blog. Instead of trying to pencil in the small details, I began to see that crafting this draft was like starting a painting with large brush strokes. I didn’t stop to figure out what road Kate would take coming home from school. I didn’t figure out which birds she listened to, which bus she took to get uptown, or how much it cost to ride that bus in 1950. There are hundreds of details that I’ll add later.


I started a HUGE “to do” list of things I want to consider layering into my story. Here is part of that list:

• What else was going on in the Charlotte African American community?
• Clothing- who wore what where
• Buildings, cars
• Glass (yes, glass. You didn’t think I could waste all my research about glass without using it somehow, did you?)


Did I say this is only part of my list? I have my work cut out for me.


How long will this take? I have no idea.


As long as it takes to get 53 short chapters or about 200 pages into shape.


As long as it takes to bring this novel to “the end.”


As long as it takes.

Ever thinking of trying your hand at writing fiction but were too timid to try? How about starting with a short story? The Center for Writing Excellence just announced their February contest. Can you think of a better way to start off the new year than with a resolution to pursue something you have always wanted to do?

Several months ago, Janie Sullivan, the CWE director, asked me to be one of the contest judges. As a result, I know first hand that the prompts are fun and the stories are creative and original. Don't worry that I might recognize you or your writing; the judges only receive and score annonymous submissions.

While you're on the website, look around at the services, courses, and writing tips that Jane offers. And in between contests, there are also free fiction prompt challenges to get your creative juices going. If you want to see the type of prompts used in previous contests, click here and scroll down.

What are you waiting for? Check out the contest website, circle the dates on your calendar, and start thinking about the prize that could be yours if you win! And here is a hint. Since the stories are usually holiday related, you can probably guess what some of the prompts might be in February!

Looking Forward in 2011 by Looking Back into History

I was delighted to read on Joyce Hostetter and Becky Levine's blogs about the Young Adult Historical Fiction Challenge that Sabrina Horande is hosting on her blog. You can join at three different levels. Post this challenge on your blog, Facebook, or Goodreads page, then e-mail Sabrina and you will become eligible for some fun giveaways.

When the Hero Is a Dog

This is the perfect time of year for elementary school students to read The Wreck of the Ethie (Peachtree, 1999). In this short novel, Hilary Hyland recounts how the steamer, the SS Ethie, was caught in the middle of a violent blizzard 90 years ago. Both girls and boys in 3rd-6th grades will enjoy reading the fictionalized account of how a Newfoundland dog saved almost 100 people from drowning to death on December 11, 1919.

The story is told from multiple points of view. Readers see the voyage, storm, crash, and rescue from the perspective of Skipper (the dog); Colleen (Skipper’s owner and daughter of a local Newfoundland fisherman); Patrick (young crew member on board the Ethie); Fergus (the superstitious, hard-working first mate); and Captain Flannery.


Hyland does a good job conveying the details of the powerful storm and how the difficult rescue operation hinged upon Skipper’s strength and bravery. Months later the “real” Newfoundland (whose name was Wisher) was awarded a leather collar and silver plate inscribed with “Hero.” Lost for years, the collar resurfaced in 2002 in an Alaskan antique store. 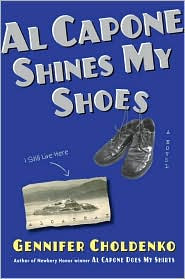 In this sequel to Al Capone Does My Shirts, Choldenko takes the protagonist, Moose Flannagan, into closer contact with Alcatraz’s most infamous prisoner, Al Capone. Although this is a work of fiction, the book is based on research about the prison and interviews with adults who lived on the island as children. The relationships of the children among themselves, their interactions with the prisoners, as well as details about the island, make this great historical fiction for young readers.


12-year-old Moose faces a dilemma. He is indebted to Capone, who pulled strings to help get Moose’s autistic sister, Natalie, into a special school in San Francisco. In exchange, Capone expects Moose to return the favor. After Moose discovers a bar spreader hidden in Natalie’s suitcase when she comes home for a visit, Moose realizes that someone on Alcatraz is planning an escape. His fears abound and allegiances are tested. The manner in which the island children work together to foil the escape brings together many disparate parts of the story including idiosyncrasies of autism, pet flies, a bullhorn, and Mae Capone’s handkerchief. 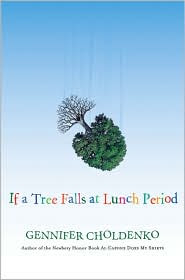 
To be honest, this book started slow. I kept listening because I admire Choldenko’s writing and I figured that this had to be more than just a story about a suburban white girl (Kirsten) who overeats because her parents are having problems, and a black boy (Walker) with a single mother who is trying to adjust to his new, mostly-white private school.


My hunch was right. Since every chapter alternates POV, the reader gets to see inside each 12-year-old’s mind as they meet and interact. This proves to be funny and enlightening and makes the book accessible to both girls and boys.


The story increases steam when Kirsten overhears a fight between her parents. She discovers a startling connection between her and Walk which is the source of her mother’s anger and depression. When Kirsten’s younger sister inadvertently informs him of their connection, Walker is shocked and angry. Kirsten is instrumental in calming him down, and in the process, discovers a new character trait about herself.The story ends with both protagonists accepting who they are. As Kirsten states at the end, “It matters who I am. I fit in the world.” This statement equally applies to both characters.


As in inveterate tree-lover and writer, I loved how Choldenko wove trees into the story. If I were a middle-school teacher I would elicit my students’ reactions to this symbol. Since my work-in-progress also has a multi-racial theme, I appreciate how Choldenko challenges young readers to think about racial prejudices and preconceived ideas about racial identity.

﻿
﻿ Have you always wanted to write a book for children but didn't know where to begin? If you live in the Charlotte, NC area than you can take a class that covers the basics of writing and publishing for young readers. Starting January 22, I'll be teaching at Central Piedmont Community College for six weeks. Find out more information by clicking here. The entire course outline is on-line too.


From my 15+ years of experience as the critique coordinator of the local SCBWI (Society of Children's Book Writers & Illustrators) group, I have found that most people first think about writing a picture book for or about their children (or grandchildren). Picture books are only a small part of the entire children's market. Writing for children includes everything from writing ABC or number books, magazine articles (both fiction and non-fiction), poems, puzzles, and early chapter books; as well as middle grade and young adult novels. Within these broad categories there are also genres such as science fiction, mystery, fantasy, sports, or historical fiction.


We will be using my book, Teaching the Story, as a text. If you aren't already following my blog, click on "follow," (in the left hand column) than send me an email at cbaldwin6@carolina.rr.com. For the month of December I am collecting names of new followers. At the end of the month I'll draw a name and that person will receive a free, autographed copy of my book. Sign up for the class, and you'll already have the text!


Please pass this information along to a friend who dreams of writing for children. What better holiday present to yourself, or to a friend, than signing up and taking the first step towards making that dream come true.

And maybe one day Ebby will be reading a book that you wrote!

The Red Pencil is Your Students' Best Friend

If you have taken a writing workshop with me or who are familiar with Teaching the Story, you know that I always stress a positive approach to revision. DevoKids, a Christian website dedicated to providing spiritual inspiration, fun activities, and writing instruction for young people, is now featuring my article on this topic.


A funny thing happened as I worked with Terri Kelly, the editor of the website. Neither she nor I gave the article a final proof before it went live. As a result, we had three more rounds of revision before we finally got it right. That goes to show you that even professional writers and editors have to run through several cycles of write-read-revise before they're ready to hit "publish!"