When friend and fellow author (and soon-to-be partner in a crazy writing adventure) Joyce Hostetter asked me to join her at NaNoWriMo when other out of their mind writers attempt to write 50,000 words during November...I thought, I can't do that. I have a presentation for the NCAIS coming up and a week of teaching at NCCAT with Joyce. And Thanksgiving and kids home from college and a trip to Wilmington and how could I ever write a book in one month?

Then I visited the NaNo website, saw that it was built for people like me, who keep saying they're going to write a novel (in my case the YA historical novel to take place here in Charlotte in 1950) but seem to never get around to writing it, and I signed up.

So, tomorrow the non-editing, gush-it-out-and-don't-look back-writing whirl commences. I'm wondering if my family can abide dust balls, dirty dishes, wrinkled clothes, and peanut butter for lunch and spaghetti for dinner. I'm wondering if my eyes will grow weary from being glued to the computer and I'm scared that nothing will come out of these fingers.

But next time you hear from me I should be several thousand words into this adventure. Hey, I may not make it to 50K--but I'll sure get a lot more pages written than I have right now! I'll keep you posted and...let the writing begin!Technorati Tags:
Joyce Hostetter, NaNoWriMo
Add to: | Technorati | Digg | del.icio.us | Yahoo | BlinkList | Spurl | reddit | Furl |
at October 31, 2008 No comments:

It's nice when someone else does your work for you 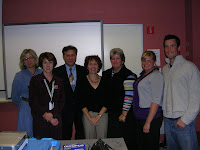 Last week I spoke at Holy Family University in Philadelphia and today I forwarded pictures of the event to one of my editors at Maupin House, Emily Raij. She kindly put together a blog on Maupin House's site. When I got done smiling, I realized the next blog Emily had posted was a review of my book by my hostess at Holy Family, Dr. Lynn Orlando.

This was the first time that I presented this 2 hour workshop on "Reading, Writing, & Technology" and it was well received. Using the new technology mini-lessons that Steve Johnson wrote for my second edition, the students used PowerPoint, Microsoft Word, a SMART Board, and a wiki to practice Show, Don't Tell writing and to see how fun revision can be.


Here's another picture from that event. Dr. Orlando is on my right, and the hero of the night, David Slowik (the technology wizard) is on my left. We grabbed a few students as well as Sally Jo Reid, a local teacher to complete our photo shoot.

It sure is nice to have friends in all the right places!
Technorati Tags:
Holy Family University, Maupin House, Teaching the Story: Fiction Writing in Grades 4-8
Add to: | Technorati | Digg | del.icio.us | Yahoo | BlinkList | Spurl | reddit | Furl |
at October 29, 2008 No comments:

There aren't too many novels which I can personally relate to. This will date me, but as I read Seven Laurels, which progressed from 1956 until 1994, I kept thinking, I was alive then.

But living in southern, suburban New Jersey is a universe removed from rural Alabama.

So although I can tell you exactly where I was in 5th grade when I heard the news that JFK was shot, my experience of life south of the Mason Dixon Line didn't begin until I moved to Charlotte, NC in 1986. Certainly I thought little about the southern African American experience while I attended high school and college. And my knowledge of Alabama didn't extend much beyond visits to Birmingham to see my in-laws and to present at the Mid-South Reading and Writing Institute. Seven Laurels, written by Linda Busby Parker, took care of those knowledge gaps.

Parker's award winning book was recommended by Doyle Boggs, Executive Director of Marketing & Communications at Wofford College and a South Carolina history aficionado. It eloquently tells the story of the life and struggles of Brewster McAtee, a talented carpenter who experiences the pains of prejudice and segregation. Parker told it like it was: showing the relationships between the whites and the blacks, the family conflicts that played out in their lives, and the joys of the accomplishments gleaned.

I often think that a well-written novel must have a great story and be written with beautiful, expressive language. Parker succeeds in doing both. I particularly enjoyed the way she wrote about Brewster's son Laurel's passionate piano playing. Laurel is an exceptional musician and in this passage, is competing in what will become a series of piano competitions:

"[Brewster] knew Laurel would be the only black student to perform. He wondered if this made his son nervous, to be the only black player in front of an all-white audience, if he carried the burden of his race as had Joe Lewis and Jackie Robinson, if he carried the burden into this new age in this new area, in front of black and white piano keys, at a white Methodist college in middle Alabama." I will remember the allegory of the white and black piano keys. This magnificent musical instrument needs both to produce the sonatas and jazz improvisations that Brewster's son loved. "Laurel took old pieces and made them new, adding his own syncopated rhythms, adding parts of his own self that came through his arms and down past his elbows to the tips of his fingers."

An adult novel, I would recommend this book for older, mature teenagers as an accurate historical picture of Alabama during the second half of the 20th century. Although there is no gratuitous sex in the book, there are several explicit scenes involving the main characters which parents may feel uncomfortable having their children read.

I appreciate Boggs recommending this book. As I proceed into writing my own historical fiction (to take place in Charlotte, 1950) this helps me to be informed about a time and a place that was far away from Cherry Hill, N.J.

Reading (and writing) in the 21st Century

At the Pennsylvania Reading Association conference this week (KSRA) I listened with interest to Dr. Donald Leu, a professor of Education at the University of Connecticut, speak on Technology and Literacy. "The Internet is this generation's defining technology for reading," he told his audience of reading specialists, literary coaches, and language arts teachers. "We place our students at risk if they're not prepared."

To be honest, I hadn't thought about the skills that students need to decode websites. Dr. Leu was quick to fill in my knowledge gap. "First a student must be able to look at a website and see who wrote the material and discover the author's bias," he told us. He demonstrated this by showing what search results for Martin Luther King turned up. The first Google hits were websites for bookstores which would not give students the information they sought.

Once a seemingly suitable website was located, Dr. Leu pointed out that student researchers must find out who hosts the site so that they can discover the author's bias in presenting the material. This would prompt critical evaluation and discussion in the classroom. He emphasized the two reading skills which are exercised at this point: locating information and then evaluating it. New literacies of online reading comprehension include identifying important information, reading to synthesize the information, and reading to connect answers to other material. Visual aids such as photos and videos can aid comprehension, particularly for slow learners.

Obviously there are issues with online reading. Students must go beyond Wikipedia searches (although as a novice wiki user there is a definite place for wikis in the classroom- my wiki at http://redfontandrevision.pbwiki.com/Welcome%20to%20Carol%20Baldwin%27s%20Red%20Font%20Wiki shows what I presented at KSRA). But wikis can be edited and thus they are less reliable as a source of information. Teachers must make sure that students are reading in depth and not simply scanning a site, and of course when it comes to writing, there are plagiarism issues with a "cut and paste" mentality.

By the way, did you know that you can have your students filter their work through a website such as http://www.turnitin.com/static/index.html which checks a document for originality? I heard of this site the day before KSRA, when my friend's teenagers told me they had to submit their papers through this website before turning them into their teachers.

Check out New Literacies Reading Lab at the University of Connecticut. Dr. Leu is the director of a team who researches the new reading comprehension and learning skills that 21st century students will need as technology changes the nature of our classrooms.

Online reading leads to online writing (e-mail, blogs, wikis, Facebook, etc) and as a writing aficionado, how can I argue with that? After all, this is the 21st century.

Using Life Experiences to Pump Up Your Writing


Here is my technical support as well as my young adult novel consultant, Anna Sattler. 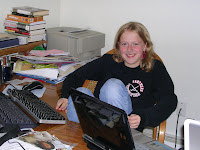 Today is the 250th anniversary of Noah Webster's birth. Where would writers and teachers of English be without the American Dictionary of the English Language? I can't help but wonder what Webster would have thought of dictionaries embedded into slim machines that weigh less than the tome he wrote and published.

Webster was more than just a eminent lexicographer (how's that for a 50 cent word!) Before he wrote his famous dictionary, he wrote a speller that had 385 editions in his lifetime and, according to Wikipedia, taught children how to read, spell, and pronounce words. "It was the most popular American book of its time; by 1861, it was selling a million copies per year, and its royalty of less than one cent per copy was enough to sustain Webster in his other endeavors."

Aspiring writers be encouraged! Webster supported himself on a book that earned a penny a copy…and become a national treasure that is still used two centuries later.

And who hasn't suffered the embarrassment, sweaty palms, and knotted stomach of a classroom or school-wide spelling bee? Thank Mr. Webster for that too.

This week, Anu Garg, the wordsmith behind A Word A Day, is honoring Webster with words about words. Today is Dictionary day. Celebrate Webster and words by playing The Dictionary Game!

The Second Edition is Here!

I'm excited to announce that Teaching the Story: Fiction Writing in Grades 4-8 is now at the printers. You can order this expanded version from Maupin House at 10% off the cover price of $23.95 until mid-October. Not only will you find more ideas on how to teach short fiction to 4th & 5th graders, but there are almost 20 new technology mini-lessons that infuse technology into the writing process maximizing differentiation in your classroom. You and your students will enjoy learning how wikis, podcasts, and virtual worlds can help them jazz up their writing and create more well-written and original fiction. Steve Johnson, a technology facilitator in North Carolina who I met at NCCAT, did a great job writing the technology mini-lessons. I can't wait for all of you to see what a fine addition these tech lessons are to the book.