The Outcasts of 19 Schuyler Place

What do two semi-retired Hungarian watchmakers, an unemployed billboard painter, a bald-headed art curator who wears a diamond stud in one ear, a high power attorney from a large New York communications firm, and a precocious 12-year-old girl all have in common?

Their passion to preserve three gigantic towers that are threatened to be torn down by city officials who consider them blights in the neighborhood.

These are not any ordinary towers, of course. But instead, they are outsider art built from pipes, scrap metal, pieces of porcelain, and a variety of glass shards (including such things as pieces of blue Noxema bottles) that took the two Hungarians 45 years to build.

In EL Konigsburg's 17th novel, a reader can hardly find a character that is more spunky, determined, and resourceful as Margaret Rose Kane. Full of humor, pathos, and suspense, readers from 5th grade and up will cheer along as Margaret Rose figures out a way to protect her uncles' beloved works of art from being destroyed.

I listened to this on CD and found Molly Ringwald's characterization of the Hungarian uncles particularly delightful. She captured their accents and my enjoyment of listening to their warm approval of their niece as well as their frequently funny arguments was enhanced by her performance. The uncles' astute observations of life add a rich depth to the story. "What you take away is as important as what you leave," Uncle Alex tells Margaret Rose as he "edits" (prunes) his roses. Through her characters, Konigusburg gives her readers—both young and old—a lot to think about.

This is a David vs. Goliath story that can be used in the classroom or home school setting to foster discussions about art, creativity, and the role of individual expression. (Atheneum, 2005)

Email ThisBlogThis!Share to TwitterShare to FacebookShare to Pinterest
Labels: book on CD, books for boys and girls, EL Konigsburg, outsider art, The Outcasts of 19 Schuyler Place

It is May 1 but my mind, as I biked through Fairfield Glade in Crossville, Tennessee was still on yesterday, National Poetry Day. Besides being able to compose it on a bike, boat, beach, or battlefield, poets of any age can write a haiku. What better way to teach the importance of every word or syllable than by adhering to the simple 5-7-5 structure?

Here is my contribution to the joy of writing poetry--and to celebrating this beautiful Tennessee plateau. 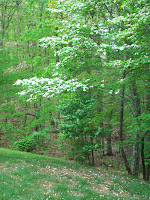