As an addendum to last week's post, I just read an article in this month's SCBWI Bulletin in which Libby Nelson listed the following subjects that teachers, students, parents and librarians were requesting. If you're a writer looking for a topic, try one of these. (Remember, you have to feel pretty passionate about it yourself--you'll be spending some time researching it!)

If you're a teacher looking for a book, please e-mail me at cbaldwin6@carolina.rr.com and I'll relay it to Libby to include in her next column.

- global warming and its effects
- erosion; weathering
- hail, rain, sleet, snow- what they are and how they are formed
- different types of eggs and what animals produce them
- Kodiak bears
- Kangaroo rats
- Swans
- The sport of curling
- biographies of the Beatles

And for preschool aged children:

- poison prevention/safety inside the house and plants in a yard
- how children can recycle
- books on senses of the body
- animal groupings (such as a litter of cats, herd of cows, etc.)
- community figures and how they help
Technorati Tags:
SCBWI, Writing for children, nonfiction
Add to: | Technorati | Digg | del.icio.us | Yahoo | BlinkList | Spurl | reddit | Furl |
at September 30, 2008 1 comment: 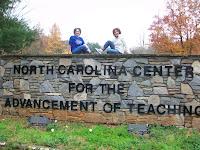 Hello from Cullowhee, North Carolina- home of NCCAT where Joyce Hostetter and I are teaching the seminar, "Is There a Children's Book in You?" We are acting as midwives-- helping 21 talented teachers from across the state write picture books, early chapter books, and novels.

Here are some writing resources I have collected for them, as well as for any of you who are also interested in writing and publishing for children.

https://www.secureaep.com/awards/attendees.php - Get a list of the 500 people who attended the Association of Educational Publishers summit on publishing for the digital future. **

http://www.evan-moor.com/Science/Catalog.aspx?CurriculumID=6 – An example of one educational publisher, Evan Moor. **

Click on this video of my granddaughter, Ebby Clark (aged 23 months) as she demonstrates how children learn to read. (Of course I'm not biased, how could you think such a thing??!) Technorati Tags:
Ebby Clark, First reader, learning to read
Add to: | Technorati | Digg | del.icio.us | Yahoo | BlinkList | Spurl | reddit | Furl |
at September 15, 2008 2 comments:

After a recent SCBWI critique meeting, I was musing with a 14-year-old first-time-attendee that writers need to consider three very distinct elements when they write. For the sake of simplicity and creating an easy to remember acronym for teachers and writers, let's think of this as:

In other words, every writer, whether an elementary school child learning to write a story, a high school senior writing a critical essay on Spanish literature, or an adult crafting an article or novel; must consider WHAT he is writing (the "story" i.e., the content), the WAY in which he is writing it (i.e., style), and then finally, he must be able to sit back and critically evaluate HOW the piece is written (evaluating the mechanics, grammar, punctuation, etc.)

Right now I am listening to The Coldest Winter by David Halberstam. Not only is it an excellent compilation of the facts surrounding the Korean conflict (the "Story"), it is also written with great style and skill. Consider the following description of an early conflict against the North Koreans in July, 1950 that met with less than positive results:

"Operation Blue Hearts reflected a wildly optimistic view of how American troops would fare…It was planned as if the North Korean assault was nothing more than the arrival of a few mosquitoes that could easily be swatted away." With a simple metaphor, Halbersham communicated his distinct opinion of the operation.

Later, Halberstam described the arrival of a North Korean tank as it moved "steadily and majestically" toward a reporter. A majestic tank? Sounds like an oxymoron, but in his iconoclastic use of the adverb "majestically" Halberstam gave his reader a word picture of the Korean army.

Halberstam died in 2007 and can't tell of the hours he spent critiquing the words, paragraphs, and chapters which fill 20 books. His legacy speaks for itself.

As the SCBWI critique leader I have found that adult writers focus on one of these "SOS" elements at the expense of the other two. Student writers experience the same dilemma. I recently chatted about how freshmen lose their sense of writing "Style" when they enter high school. Robi Rego, the 9th grade language arts teacher at
Covenant Day School commented that they don't see the connection between "creative" and "expository" writing. They enjoy writing short stories in middle school, but fail to use these skills when writing essays. I reminded her that good expository writing needs the same flair, style, and pizzazz that fiction writers imbed in their stories.

As a teacher or writer, how can you apply these principles?

WRITING SOS - What every writer needs.

Pillars of Gold and Silver

In a recent conversation with my 16-year-old nephew Ben about my blog, I mentioned that I generally blogged about books that I recommended. In a typical adolescent "let's think outside of the box" response, he said, "Why are you doing that? Book reviewers don't have to like a book in order to write about it."

So thanks to Ben, this is my first blog about a book that I didn't like and would not recommend: Pillars of Gold and Silver. Suggested to me by a librarian who was helping me choose books related to the Korean War, this middle-grade book takes place during that time period and thus is a glimpse into that era.

The story is interesting enough. A young girl (Blanca Estela) moves to Mexico with her mother immediately following her father's death in the Korean War. Her Spanish is poor and she must adjust to living in her grandmother's village and the different customs, food, and forms of recreation that greet her. This could be an interesting plot and view of a different culture and time period for 4-7th grade readers, but unfortunately the author, Beatriz de La Garza, breaks two cardinal rule of writing: She tells, rather than shows and dumps information in paragraphs that plod from chapter to chapter. Consider this paragraph early in the first chapter. It is the first time her mother speaks about her husband's death, on the bus ride to Mexico:

Sometimes they stopped in little towns, or even where there was only a gasoline station or café all alone in the middle of nothing. Then her mother would have her get out and go to the restroom or give her sandwiches to eat, even when she wasn't hungry. Other time when she was hungry, she had to wait a long time to eat until they reached their next stop. Once, when she was both hungry and sleepy, she began to fret and to complain about it to her mother, but then she stopped because her mother did not seem to be listening. She seemed to be far away in her thoughts, and, instead of responding she asked Blanca Estela, "You don't really remember him do you? You were still so little when he left. He only came back once for a visit after that. He was supposed to come back for good by the New Year. And now he is never coming back." (p. 10)

An event that should emotionally grab the reader in the gut- a little girl's father's death- leaves the reader yawning. To me, de la Garza's desire to include many interesting details ends up weighing the story down. Coincidentally, yesterday I was reading the October issue of Writer's Digest. In the article "What Agents Hate" Rachelle Gardner of WordServe Literary says, "One of the biggest problems is the 'information dump' in the first few pages, where the author is trying to tell us everything we supposedly need to know to understand the story. Getting to know characters in a story is like getting to know people in real life. You find out their personality and details of their life over time." In the same article, Jennifer Cayea of Avenue A Literary is quoted as saying: "I [dislike] inauthentic dialogue to tell the reader who the characters are, instead of showing who the characters are."

In my book, Teaching the Story and at teacher's conferences I talk about the need to show characters FAST- through their feelings, actions, speech and thoughts. When an author narrates and tells rather than shows, their characters are one dimensional and lacking the immediacy of someone you have enjoyed getting to know.

Unfortunately, de la Garza's long narratives didn't engage me and I'm afraid that most young readers won't get far enough into the book to be caught up in the story. That's too bad. The author had an interesting story to tell, oops!, to show.