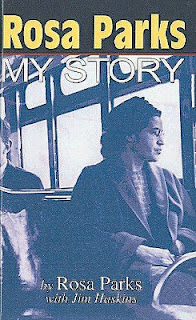 Unaccustomed to attention, Rosa Parks (1913-2005) was an unlikely heroine of the Civil Rights movement. Yet on December 1, 1955 when she refused to relinquish her bus seat in Montgomery, Alabama, she set in motion events that she would not have dreamed possible.


In her own words, this autobiography is a window into history and into Mrs. Parks' life. I read it to better understand the Jim Crow South as the backdrop of my work-in-progress, Half-Truths. Since I think she can tell her own story better than I can, here are some quotes that grabbed me.


About her maternal grandfather:
"My grandfather was very light complected (note: his father was a plantation owner), with straight hair, and sometimes people took him for white. He took every advantage of being white-looking.... He'd be introduced to someone white man he didn't know, and he'd say, "Edwards is my name," and shake hands with them. Then people who knew him would get embarrassed and have to whisper to the others that he was not white. At that time no white man would shake hands with a black man. And black men weren't supposed to introduce themselves by their last names, but only by their first names." p. 16

After being scolded by her grandmother for daring Franklin, a white 10-year-old boy, to hit her:
"...I came to understand that my grandmother was scolding me because she was afraid for me. She knew it was dangerous for me to act as if I was just the same as Franklin or anybody else who was white. In the South in those days [1923] black people could get beaten or killed for having that attitude." p. 23.

In 1941 Mrs. Parks got a job at the local Army Air Force Base. President Roosevelt had integrated the base but,
"I could ride on an integrated trolley on the base, but when I left the base, I had to ride home on a segregated bus. [A white woman worked in the same building as she did.] "We would get on the base bus and sit right across from each other....She had a little boy about nine years old...We'd sit across form each other and talk. .......when we'd get the city bus, the white woman would stop at the front and we'd go to the back and the little boy would be looking at us so strangely." p. 65.

In 1945, in Montgomery, Alabama:
"Black people had special rules to follow [on buses]. Some drivers made black passengers step in the front door and pay their fare, and then we had to get off and go around to the back door and get in. Often, before the black passengers got around to the back door the bus would take off without them. There were thirty-six seats on a Montgomery bus. The first ten were reserved for whites, even if there were no white passengers on the bus...Blacks were required to sit in the back of the bus, and even if there were empty seats in the front, we couldn't sit in them." p. 77

From her experience working as the secretary for the local NAACP office in the late '40's:
"We didn't have too many successes in getting justice. It was more a matter of trying to challenge the powers that be, and to let it be known that we did not wish to continue being treated as second-class citizens." p. 89

Remembering what Mr. Nixon, former head of the NACCP in Montgomery, said about her arrest:
"I was a perfect plaintiff....I had no police record. I'd worked all my life, I wasn't pregnant with an illegitimate child. The white people couldn't point to me and say that there was anything I had done to serve such treatment except to be born black." p. 125

During the year-long protest that the blacks staged against bus segregation; this was one group that became vocal:
"Some of the white women couldn't get along without their maids....The mayor appealed to them...He said the boycott was successful because the white women were taking all the maids back and forth. They said, 'Well, if the mayor wants to come and do my washing and ironing and look after my children and clean my house and cook my meals, he an do it. But I'm not getting rid of my maid." p. 145

Reflecting on how she was rattled when a reporter tried to intimidate her and find out "what made her tick."
"I was not accustomed to so much attention. There was a time when it bothered me that I was always identified with that one incident. Then I realized that this incident was what brought the masses of people together to stay off the buses in Montgomery. p.154.

About the Civil Rights Act of 1964:
"...[it] did not solve all of our problems. But it gave black people some protection, and some way to get redress for unfair treatment."
p. 167

In 1992 she wrote:
"Organizations still want to give me awards for that one act more than thirty years ago. I am happy to go wherever I am invited and to accept whatever honors are given me. I understand that I am a symbol. But I have never gotten used to being a 'public person.'' p. 185

Her concerns for the future:
"What troubles me is that so many young people, including college students, have come out for white supremacy and that there have been more and more incidents of racism and racial violence on college campuses. It has not been widespread, but still it is troublesome. It seems like we still have a long way to go." p. 187

Without pride or self-consciousness, Mrs. Parks simply tells her story. Her life spanned almost an entire century; a century in which she was a witness to--as well as an instrument of--change. This autobiography is easy to read and I recommend it for both young and old readers.  We all can learn from her humble example.

Oh, thanks for sharing Rosa's words. Perfect way to give us a glimpse of the book!

Thanks, Joyce. Many times we can't improve another people's words!!