I read Through My Eyes by Ruby Bridges as a part of my research for Half-Truths.  I came across a photograph of Norman Rockwell's painting depicting Ruby's brave integration of her Louisiana elementary school. I saw the original "The Problems We All Live With" at the Norman Rockwell Museum in Stockbridge, Ma. The huge painting of the white guards escorting the young black girl to school stuck in my mind. The docent remarked how Rockwell used a splatter of red to emphasize the story behind the illustration and how Ruby is pictured, but the men walking with her are faceless.
Rockwell published this illustration in the January 14, 1964 issue of LOOK magazine. As Bridges quoted, Rockwell was inspired by John Steinbeck's Travel with Charley:
The show opened on time. Sound of sirens. Motorcycle cops. Then two big black cars  filled with big men in blond felt hats pulled up in front of the school. The crowd seemed to hold its breath. Four big marshals got out of each car and from somewhere in the automobiles they extracted the littlest Negro girl you ever saw, dressed in shining starchy white, with new white shoes on feel so little they were almost round. Her face and little legs were very black against the white.
The big marshals stood her on the curb and a jangle of jeering shrieks went up from behind the barricades. The little girl did not look at the howling crowd but from the side the whites of her eyes showed like those of a frightened fawn. THe men turned her around like a doll, and then the strange procession moved up the btoad walk toward the school, adn the child was even more a mite becase the men were so big. Then the girl made a curious hop, and I think I know what it wa. I think in her whole life she had not gone ten steps without skppin, but now in the middle of her first skip, the weight bore er down and her little round feet took measured, reluctant steps between the tall gaurds. Slowly they climbed the steps and entered the school.
Ruby Bridge's account of the events leading up to that day in New Orleans in 1960 are fascinating. She believes that she lost her childhood during that first grade year, when she integrated the school amidst boycotts, riots, and tremendous community tension. She was the only child in her class the entire year because white parents moved their children out. Attendence in school dwindled. Next year, her second grade class was integrated. "William Frantz School was integrated, but the long strange journey had changed me forever." (p. 53)
It wasn't until thirty years later, after her brother's death in a drug-related shooting, that Ms. Bridges began to realize the importance of what she had done in 1960. At that point she began to become proactive in the Frantz School and established the Ruby Bridges Foundation.
This book integrates Ruby's story with local and national history. Newspaper photographs, accounts by her teacher and a child psychiatrist, and a 1960 quote from John F. Kennedy, "Can we honestly say that it doesn't affect our security and the fight for peace when Negroes and others are denied their full constitutional rights?" provide historical context for this picture book for all ages.
************ 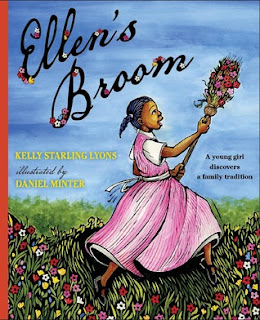 The second book I want to highlight, is Ellen's Broom by North Carolina author, Kelly Starling Lyons. Recently chosen as one of four new picture books celebrating African American History month by USA Today, this story came from Lyons' research into her own family history. According to yesterday's USA Today,
Author Kelly Starling Lyons was researching her family's roots when she came upon a copy of the 1866 Cohabitation List of Henry County, Va. As Lyons learned, the end of the Civil War meant that former slaves, living as husband and wife, could have their unions legally recognized by the Freedman's Bureau. That inspired a heartwarming story about how a young girl discovers the symbolic value of a broom. (Slaves once staged weddings using brooms they leap over "into life together.") Daniel Minter's vividly colored block prints are brilliant.
I think both of these picture books are great classroom resources for African American History month.
at February 10, 2012

Thanks, Carol. I love that Norman Rockwell painting- it's so powerful. And I'm really excited about Kelly Lyon's new book.

Thanks, Constance. It is very powerful! If you ever have the chance, you should go to the Rockwell museum. Give yourself lots of time. It is wonderful--and you'll appreciate it even more than I did!

Carol,
Thanks for another quality post. Art and fine books can teach us much!

I've loved that N. Rockwell picture since I was a little girl. My mom explained what was going on in the pic. It made me sad for the little girl then... and it still does now. I am thankful for the changes that have been made in our society... but we still have a looong way to go!

I am so excited about Ellen's Broom! Can't wait to read it!

Thanks Donna and LInda. I had seen the NR painting but didn't know the story behind it. It was great putting it al together in my mind. And to think that Steinbeck was a part of it too!

Great post, Carol. I've seen the Rockwell Museum, too, and wish we still had such a combo as Rockwell and Look Magazine to keep us so powerfully informed.

Yes, Linda. How right you are!

I have that painting in my home and so does my sister. I think it is quite powerful. The books are great and should be added to reading list for the school year including Black History month. Great post. Thanks!!

Thanks, "Diligent Writer" for stopping by and leaving a comment. I think this painting speaks to a lot of people.