If Costello Wanted to Buy a Computer from Abbott 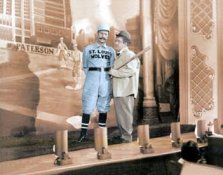 A friend of mine recently emailed me a part of this interchange. I googled the Internet and found that the author is Tom King of Flint, Texas. He granted me permission to post it here and noted that "Drama teachers are using it as a humor exercise - teaching actors how to use comic cadences to generate laughs. The skit, because of its resemblance to the Abbot and Costello style allows the actor to learn what it was that made Abbott and Costello funny... As writers, capturing a living person's delivery style in your writing is an art."


I thought that upper elementary and middle school students would enjoy acting this out--probably fighting over who would have the chance to be Abbott and Costello! Class discussion could focus on how word contexts are critical in reading and writing.

(sound of wood and metal scraping followed by breaking glass)

Email ThisBlogThis!Share to TwitterShare to FacebookShare to Pinterest
Labels: Abbott and Costello, drama, humor in the classroom, word contexts

That is so funny, Carol! Thanks for the giggle this evening.

Janie, everyone needs a good laugh every once in awhile! Not a typical entry for my blog...but as you can tell, I'm always thinking about how to connect things to teaching writing.

Glad you enjoyed it Gretchen-- particularly with your love for baseball!