Congratulations to Connie Saunders who won The Forgiving Kind from last week's blog.

As I've mentioned before, one of the pleasures of reviewing books is that books arrive on my doorstep--sometimes even without me asking for them! Recently, I received several new publications from Sleeping Bear Press and I'm happy to share my reviews with you. No book giveaways though--I'm giving these books to Linda Phillips to fill her suitcase as we spread literacy and literature around the world! But read on-- one of the authors, Sophia Golz, is donating a 15-minute Skype visit. By the way, not only will these books serve as ESL resources in an underprivileged Eastern European classroom, they will be fantastic curriculum resources in American preK-3rd grade classrooms.


THE BOY WHO GREW A FOREST 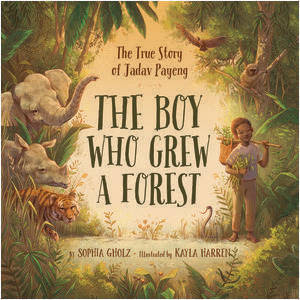 Have you ever heard of Jadav Payeng? I hadn't until I read this informative, inspirational, and beautiful book, The Boy Who Grew a Forest, Sophia Gholz's debut picture book.

As a boy, Jadav was upset that a nearby island in northeastern India was losing its trees. The island was eroding away into the river leaving hundreds of snakes without homes. In 1979, Jadav began planting bamboo. He brought seeds from neighboring villages and despite many odds, the forest became filled with wild animals and diverse vegetation. It grew from ten acres to 1360 acres--which is larger than 900 football fields! The lush illustrations by Kayla Harren show Jadav's toil as well as the joyful fruit of his labors. Gholz's End Notes include her inspiration for writing this book and a simple seed planting activity that children and their parents or teachers would enjoy. 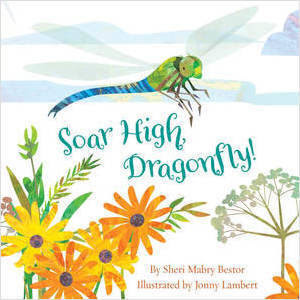 Here's another topic I haven't thought about much: dragonflies. Sheri Mabry Bestor's book, Soar High, Dragonfly! does double duty. The top lines in larger text appeal to young readers with simple descriptions of the dragonfly's life cycle. The bottom text (which sometimes is literally under water--very clever!) goes into great detail about the dragonfly's behavior, habitat, and metamorphosis. Jonny Lambert's illustrations reminded me of Eric Carle's vibrant palette. This book will appeal to children and adults of all ages.


THE FIRST MEN WHO WENT TO THE MOON 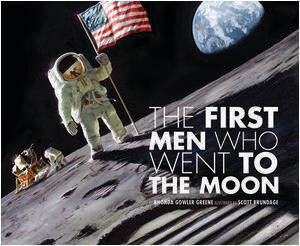 Fifty years ago Apollo 11 carried the first men to the moon. Like Soar High, Dragonfly, THE FIRST MEN WHO WENT TO THE MOON is written on two different levels. Rhonda Gowler Greene's lovely verse will be read as a story while the reader points out how the illustrations enrich the text. Older children will appreciate the secondary text which provide more details about what occurred during the space mission. To be honest, I've never seen a picture book written in this type of rhyme, but it works! The last five spreads repeat the first two lines of each poem and act as a fitting, circular conclusion. The last spread gives more information about the astronauts and the mission. Scott Bundage is the same talented illustrator who provided colorful and realistic illustrations for A is For Astronaut. 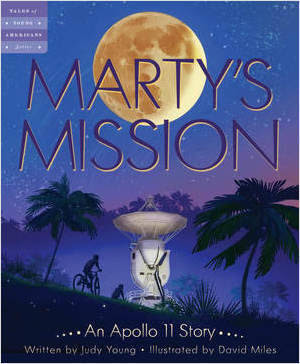 MARTY'S MISSION by Judy Young is different than the three nonfiction books mentioned above. A part of Sleeping Bear Press's "Tales of Young Americans" series, this is a lengthier text about a young boy named Marty who tracked Apollo 11's voyage from his home in Guam. Marty and his family had moved to Guam for his father's job at the NASA tracking station. The night that the Apollo 11 was to splash down, the antenna got stuck. Marty is asked to perform a task that only a young person could do--fix the antenna. Based on the true story of ten-year-old Greg Force, a young American was instrumental in bringing the astronauts safely home. Readers who prefer learning via a true story rather than through an informational text, will enjoy MARTY'S MISSION. The life-like illustrations by David Miles amplify a text that both boys and girls (and their parents!) will enjoy.

Sophia Golz is donating a 15-minute Skype visit to one fortunate classroom. Leave me a comment (with your email address please!) and I'll add your name to the hat. Giveaway ends May 9th.

Stay tuned for reviews of some silly picture books from Sleeping Bear Press!

Carol...Thank you for the opportunity to enter this GIVEAWAY. Our grandchildren love the books they have received. Please enter my name.

Thanks for sharing these books with us, Carol! Now I have a few more to add to my "to-read" list.

More, more books! I only had one of these on my TBR list. Thanks for these recs, Carol!

Thanks Gail, Becky, and Jilanne for your comments. I'll put your names on the Skype giveaway list!

I have read Soar High, Dragonfly and it is charming. I haven't seen the others, but I'm working on some NF picture books, so might look at these for mentor texts. Thanks for the heads up. I will pass on the giveaway.