The Forgiving Kind: A Review and Audio Book Giveaway

Donna Everhart warned me that her newest book, The Forgiving Kind (Kensington, 2019) had some tough parts. 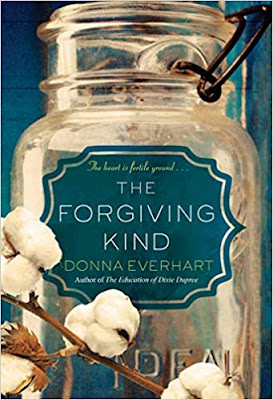 Like her previous book, The Road to Bittersweet, The Forgiving Kind  also features a young woman coming of age in rural North Carolina. The time is the 1950's and the place is 300 acres of Jones County--cotton territory. Although both books have young protagonists, the serious content of each novel lends themselves more to an adult rather than teen audience.

Twelve-year-old Sonny Creech loves the land as much as her father and like him, has the ability to dowse water. Although her two brothers Ross (16) and Trent (14) work the farm alongside their father, Sonny's passion runs deepest and Donna Everhart brings this to life through a deep point of view showing Sonny as she runs through the soft mud, inhales the smells of the fields, and experiences the woods like an extension of herself.

Tragedy strikes early in the book. Sonny father dies unexpectedly and her mother is "layered with sadness" as she and the children shoulder the burden of struggling to keep their cotton farm financially afloat.

A wealthy neighbor, Frank Fowler, shows up and worms his way into the family by lending them money. From the start, Sonny distrusts him: "Mr. Fowler's work clothes were spotless and pressed. He was the type who lifted a finger only to say, do this, do that." Repeatedly Sonny observed that Mr. Fowler was nice to her mother, but spoke and acted as if she wasn’t there.


Before his sudden death, Sonny's father gave her his willow branch that he used to dowse water. Everhart describes it as, "Tugging on my lower leg muscles. The willow branch dipping to water. She couldn’t have pulled it up if she tried." The branch is a deep connection to her father but Mr. Fowler, and her peers at school make fun of her ability. When Sunny finds the burnt branch in the trash bin outside, Mr. Fowler denies his actions.
Along the way, Mr. Fowler meets Sonny's close friend, Daniel. He reacts strongly to him and is verbally abusive. Sonny finds herself attracted to Daniel, but her attraction is not reciprocated. The two end up meeting secretly to avoid Mr. Fowler's fury.

Sonny worries about her mother not seeing Mr. Fowler's intentions: "I couldn't explain my worry anymore than I could explain how the dowsing stick worked." When they marry, Sonny's fears and unhappiness increase as she feels like her mother has betrayed her and the memory of their father.

Through the use of deep point of view, the reader is privy to Sonny's anger, fear, conflicts, and pain. Sonny hears and sees the results of Mr. Fowler's abusing her mother. "Mama's life is getting eaten up." Her hatred towards Mr. Fowler grows when she realizes he and his friends are members of an evil white supremacist group. She and her brothers are forced to observe his gross mistreatment of Daniel and fear what might happen to any of them if they speak of it. Everhart paints a picture of a deeply disturbed antagonist that is gripping and unforgettable. Readers who are in an abusive relationship might resonate with how Sonny's mother tries to be the peacemaker and placate her new husband.

Some readers will find the way in which Sonny's mother resolves her situation to be satisfactory and they may also be sympathetic to Daniel's plight as a homosexual. Although I thought that The Forgiving Kind is written extremely well, as a committed Christian I am uncomfortable with these aspects of this book.

Donna was right. This is a tough book to read and digest. But a book worth reading, thinking, and talking about. 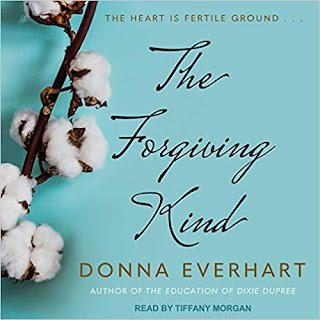 I am giving away my Audio CD, which is narrated beautifully by Tiffany Morgan, courtesy of Tantor Audio. Leave me a comment by May 2 and I'll enter your name in the giveaway.

Here is an audio snippet from the book that will give you a flavor of the book and the narration.

Oh, this book sounds amazing! And I'm on an audiobook kick right now! Enter me, please!

Thanks Keturah, starting the list with your name. Can you leave me your email address?

Carol, I appreciate your honest assessment of the content of this book. It does sound like a worthwhile read and I would be interested in entering the giveaway.

I find that those books with tough parts are usually the most rewarding. That sounds like the case here.
turtle6422 at gmail dot com

Thanks Jane Leah and Linda. Your names are on the list.

Both of the books sound like good reads. Please enter my name in the giveaway. Thanks!

I listened to the snippet and the narrator does an amazing job telling this story. The issues dealt with will be ones that are difficult, but important ones to see from other points of view.

Danielle and Gail, your names are on the list. Thanks for stopping by.

I've seen this book title many times but I wasn't aware of all of the topics. I appreciate your honest review.
Connie
cps1950(at)gmail(dot)com

Interesting that you've heard of this book, Connie. you're in.

Thanks for telling me about this book. It sounds like one worth reading. I will pass on the giveaway.

What a lovely cover. Sounds like a book worthy of reading.

Your name is in the hat, Theresa. I believe you would enjoy it.

Hi Carol, I always enjoy your reviews. Thanks for sharing this interesting novel. Since I don't listen to audio stories, please don't add my name to the list. I will read a copy!

Just your review is riveting. I'm working on a MG Historical novel with a 12-year-old protagonist and seeking to deepen 2 key characters. Would love to enter your giveaway. Many thanks for your Blog, Carol!

You're in Mich. Please leave me your email address in case you win!

Sounds like a reverse Cinderella epic on steroids with an evil stepfather and edgy themes that smack us in the face and makes us think. Love that it is set in NC, too!

Interesting comparison, Cat. You're in!

Oh man! Where was I when you conducted this giveaway? This is just what I need to accompany me in all my upcoming painting projects. I loved Road to Bittersweet!

sorry you missed this, Joyce. Maybe you can get it from your library!