Congratulations to  Keturah Lamb who won my ARC of Maybe He Just Likes You from last week's blog.

We're back to picture books today and I have some fun ones for you to try to win for a child, grandchild, or student in your class. Thanks to Sleeping Bear Press, I seem to have an endless supply to review and pass along! 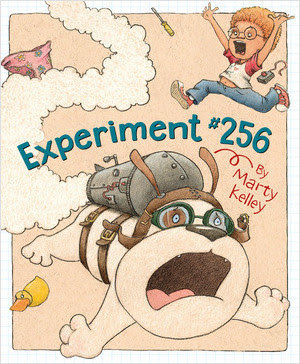 Experiment #256  by Marty Kelley, is a cleverly written and illustrated STEAM-focused book for the youngest reader. The funny story of how Ian builds a jet pack for his dog, Wilbur, and all the things that go wrong is told through the illustrations, making this a book that pre-readers can figure out from the pictures. Minimal text is written in the form of Ian's notes about the experiment.

On the first few pages Ian builds the jet pack but wonders why he has leftover parts.


Outside, Ian and Wilbur run into more trouble.

In the end Ian designs Experiment #257, a Snack Blaster that blasts out dog treats. Wilbur is hugely happy...but their neighbor, Mrs. Marino is not. You'll have to get the book to see why!

By the way, the Front Matter is very clever. Kelley has small vignettes showing twelve of Ian's previous experiments...and disasters. 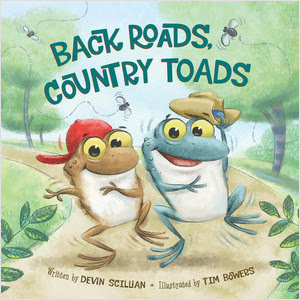 Back Roads, Country Toads is not the first book by author Devin Scillian and illustrator Tim Bowers. I was drawn into this book by the first lines, "On a warm spring morning, Hank and Buckaroo were sitting in their favorite drainpipe near Cooper's General Store. They were licking up the last few sips of a bottle of strawberry soda and they were as happy as two country toads could be."

The adventure starts when Hank and Buckaroo overhear two men talking about fly fishing. They assume that the men are going fishing for flies...what else could it mean?

When they get to the fishing spot, Emmitt, a friendly raccoon, overhears their delight:

After Bukaroo almost gets hooked by a fake fly, the toads are disappointed to discover that fishermen use fake flies for lures. But Hank turns the tables by using Emmitt's stolen fish as a lure for a fly dinner.


In the end, "... two very plump, very happy country toads waddled back to town for a strawberry soda and an afternoon nap." 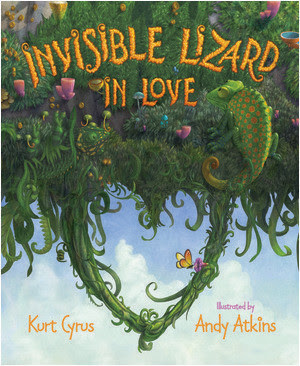 Invisible Lizard in Love follows chameleon Napoleon's first book, Invisible Lizard  in which he sorrows over not having any friends (after all--he's a chameleon, so who sees him?). In this second book, written by Kurt Cyrus and illustrated by Andy Atkins, Napoleon's new-found friends desert him when they find love. He's alone again!

Napoleon sulks and then scratches his initial inside a heart on a tree. When the branch snaps,


Napoleon realizes that the only thing which is keeping the limb balanced is the "big warty lumpstool" who turns out to be a girl chameleon aptly named (who else?) -- Josephine.

The two chameleons slowly move towards one another, afraid to disturb the balance of the precarious limb.


Until they meet in the middle of the branch.

Like a chameleon itself, science and friendship lessons are hidden within the story and illustrations.

******
One of the challenges of writing a good picture book is that the adult reader and the child are both entertained. These three picture books soundly meet that challenge.

Leave me a comment if you would like to win Back Roads, Country Toads or Invisible Lizard in Love. (I'm saving Experiment #256 for my grandkids). Make sure you leave me your email address if you are new to my blog and which book you are interested in. Giveaway ends September 26 and is limited to the continental United States.

These books look great- enter my name please! Thanks

Happy 1st Day of Fall, Carol. These books sound delightful and I would love to be entered. Thanks for sharing.
Blessings!
Connie
cps1950(at)gmail(dot)com

Thanks Susan and Connie. You're both in

These books do look great! Any of my 5 grandchildren would love them. Please enter my name. Thanks.

Thanks Gwen. You're in!

Back Roads, Country Toads for me please and thank you. I watch this news anchor EVERY night on Detroit's NBC station, so I would love a chance for this book from a local author.

How fun, Danielle! Did you know he was a picture book writer too? You're in the race for Back Roads!

Hi, Carol. Back Roads, Country Toads, please. Then again, perhaps Invisible Lizard in Love. Arggh! Decisions! In any case, please enter my name. I will appreciate either one. I do receive your blog posts.

Such cute books Carol!
It would be an honor to be entered for any of these titles. It's too hard to pick one over the other so I'll let you decide.
Thanks for sharing these cute books.
Rosie

Hi Carol, I enjoy reading your reviews and the giveaways are always fun to enter! I appreciate getting to know you at W2I & it's leadership team. :)

thanks Diane, Lola and Rosie. Lola--I don't have your email address, so please leave a comment so I can let you know if you win.

Oops. Here you go, Carol. Email is: llwoods844@gmail.com
Thank you.

Sleeping Bear Press never disappoints! These are three great books with so much for kids and parents to enjoy! Wonderful post!

I agree, Stephanie. But I need your email address to enter you in the giveaway!

I have read and loved both Experiment $256 and Back Roads, Country Toads. I would love to win a copy of Invisible Lizard in Love. Thanks for the post and the chance.

All look so adorable!! great post! I'm especially drawn to the Country Toads.

These look like a lot of fun! My grandkids wold love them.

These look like a lot of fun! My grandkids would love them.

Thanks, Carol. Unfortunately, I already picked a winner. Next time!

Enter me for invisible lizard in love please! Pattimc1963@gmail.com.Nice blog!

Sorry Patti, this giveaway has ended. Stay tuned for more!