The Heart Changer by Jarmila del Boccio: A Review and E-Book Giveaway

Congratulations to Jana Leah who won D is for Down Under from last week's blog. 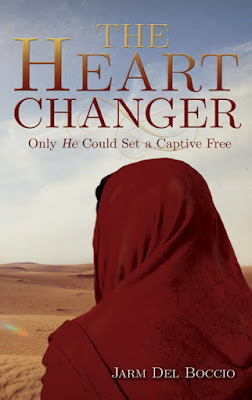 I will never read 2 Kings 5 the same again.

For those of you who don't know this Biblical account, this chapter of the Old Testament tells about Naaman, a captain in the Syrian army, who has leprosy. A young Israeli girl who he captured and gave to his wife, tells Naaman about how the prophet Elisha might be able to heal him. Despite his reluctance and pride, Naaman follows Elisha's instructions to dip seven times into the Jordan river and is healed.

In Jarmila del Boccio's (she goes by "Jarm") debut middle grade novel, The Heart Changer, this Old Testament story is brought to life.

The young Israeli maid who Jarm named Miriam is given an authentic backstory which makes her believable and likable to modern-day girls. The story opens with Miriam's capture by the Syrians. Immediately, the reader empathizes with Miriam as she is torn away from her family. She is brought to Naaman's palace where the language, customs, religion, and people all are strange to her. Miriam is angry with Naaman for stealing her away, with God for deserting her, and for being forced into servitude to a woman who worships foreign gods. Add to that she is overwhelmingly worried that she will ever see her family again and must share a room with the servant girl who she replaced and who despises her.

Throughout the book Miriam struggles with wanting to please her Heavenly Father and accept His will for her, at the same time that she struggles against homesickness and wanting her freedom. Bonds are established between Miriam and her master's wife who treats her as if she is her own daughter. In time, Miriam is able to say a few words to her mistress about the one true Jehovah. When Naaman discovers his leprosy, Miriam is the one who encourages him to seek the Lord's help--through the prophet Elisha.

Miriam accompanies her master and mistress as they travel through Samaria to find Elisha. When they get to her village Miriam is fearful that her family has been killed. She is overjoyed to find out that they are still alive.

In the end, not only is Naaman's body cleansed, but his heart is also changed. And so is Miriam's. She and her family learn to forgive those who harmed them and to accept the Lord's sovereignty in their lives.

Jarm's exhaustive research into the typography, animals, plants, food, dress, and customs brings the book to life. Girls from 8-12 and their mothers will enjoy reading or listening to this book together.

To celebrate her book's one year birthday, Jarm is giving away a copy of the ebook to one fortunate reader. Leave me a comment (with your email address if you are new to my blog) by 6 PM on May 1 and I'll enter your name. Share this on social media or subscribe to my blog and I'll add another chance to win!

Thank you for another wonderful recommendation for older girls!

Thanks for reviewing this book, and yes, it sounds perfect for my 11-year-old granddaughter. I'd love to win this one!

Thanks Linda and Kathy. All of your granddaughters would like this book!’

It sounds like another winner for young girls. I love that Jarm took a story that many believe to be true and turned it into exciting fiction.

Thanks, Sandra. Your granddaughters would enjoy this book.

This does sound interesting. Thanks for telling me about it. I love the cover. I will pass on the giveaway.