The Korean War by Bruce Cummings: An Audio Book Review and Giveaway

Congratulations to Danielle Hammelef who shared Stompin' at the Savoy in three places on social media--and won my copy of the book.

It's been awhile since I've reviewed an audio book because of my new-found fascination with nonfiction picture books. I initially ordered The Korean War from Audible Books to gain a better perspective on what Ben Dinsmore, my protagonist in Half-Truths' father, experienced during and after the war.

Bruce Cummings, author of The Korean War (Penguin Random House, 2011), is an award-winning professor and lecturer of East Asian studies. At 350 pages (eight hours) this book is not an easy read, but provides a lot of information and a different perspective of the "Forgotten War." 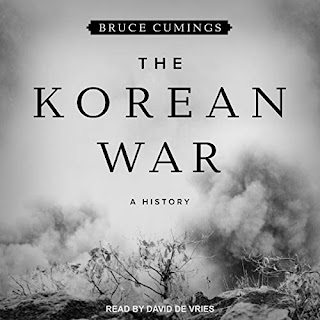 The following points helped me understand what Kate's father witnessed. 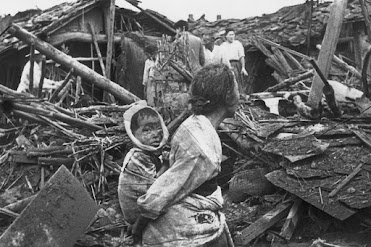 Circa 1950: An elderly woman and her grandchild wander among the debris of their wrecked home in the aftermath of an air raid by U.S. planes over Pyongyang, the Communist capital of North Korea. (Photo by Keystone/Getty Images)

It would have helped if Cummings had placed the history of the area and of American involvement in the first part of the book. Since there was a lot of material, important facts were given in the middle of the book. That made the chronology difficult to follow.
It was clear by the end of the book that Cummings did not favor American involvement in the war. As it turned out, the day I finished listening to this I met someone who immigrated to America from South Korea many years ago. His opinion was very different. He was vehement in his appreciation of American involvement.
I recommend this book for any young adult or adult who is interested in learning more about this time period.
The narrator, David de Bries did a fine job of reading this book. Here is an audio snippet: https://tinyurl.com/yb5xlsf4.

If you would like to win a copy of this audio book, please leave your name and email address in the comments and Recorded Books will provide a download code for you. This could be a great gift for the history lover in your life, Giveaway ends March 5 at 6 PM.

I have a copy of David Halberstram's The Coldest Winter about the Korean War. I need to get to that one of these days. I will pass on the giveaway. I don't know when I would have a chance to get to this. Thanks for the post.