Born to Swing: A Picture Book Review and Giveaway

As I mentioned a few weeks ago, I have a shelf full of picture books to review, use as mentor texts, and to give away. In honor of Women's History month, here's my next one, Born to Swing (Calkins Creek, 2018) by Mara Rockliff and illustrated by Michelle Wood. 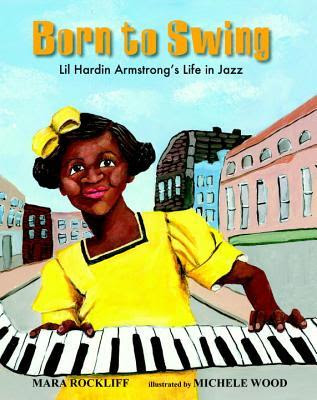 "I was born to swing, that's all. Call it what you want, blues, swing, jazz, it caught hold of me way back in Memphis and it looks like it won't ever let go." Lil Hardin Armstrong

In this vivid picture book biography, Lillian Hardin Armstrong's life and love of music is depicted on every page.

From the time she was a child, Lillian loved to listen to the Father of the Blues, Mister W.C. Handy's band playing outside her Memphis boarding house window.

Although her mother called it "Devil's music," she couldn't keep Lillian away from the family organ. Her legs were too short, so her cousin played the pedals for her! 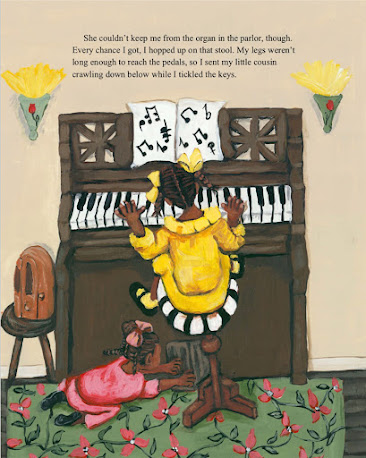 Lillian played hymns for Sunday School--albeit with a beat. She didn't know it at the time, but she was playing jazz! During a piano contest she lost her place, improvised, and won!

When the Great Migration north started, she and her mother headed to Chicago. There she strolled up and down the Stroll listening to music at all hours of the day and night.

She got a job playing piano in a music store and earned the tile, "The Jazz Wonder Child." 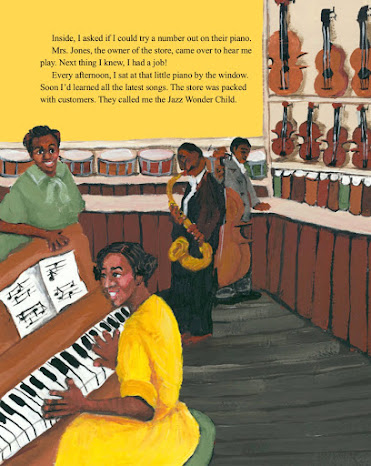 She met Jelly Roll Morton (who said he invented jazz) and despite being a woman, started playing with the New Orleans Creole Jazz Band.

She was "swinging with the swingingest band in Chicago. I laid those rhythms down so hot, they called me Hot Miss Lil." That's when she met Louis Armstrong.

"Louis was not a handsome man. His clothes were out of style. But when he blew his horn, oh, gee!"

Of course, they had a jazz wedding! No honeymoon for the two of them, they were too busy touring across the country with the band. 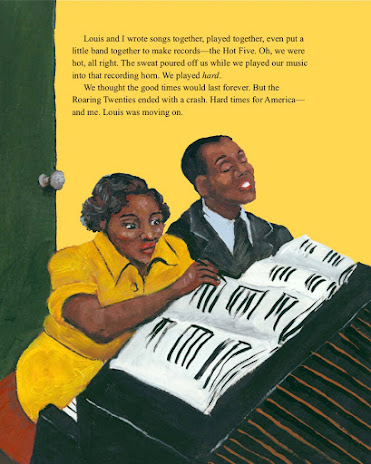 Lil and Louis wrote songs and put a band together they called the Hot Five. Their marriage lasted for 14 years; the author reporting their divorce as Louis moving on.

Lil continued to write songs and play piano. She also started her own band, ran a restaurant, designed clothes, and traveled to Paris where the French had flipped for le jazz hot.

When she returned home, the country was wild about rock and roll. She thought maybe everyone had forgotten her, but she was labeled a "living legend" and she was on television-- a new type of entertainment media back in the day! 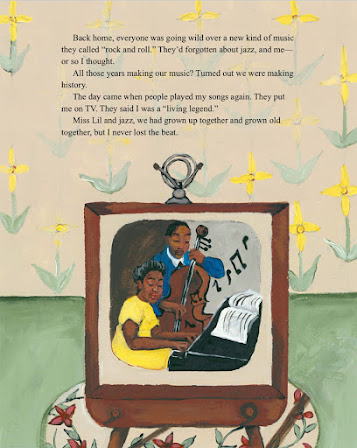 You won't believe me, but I died at the piano, playing that "St. Louis Blues"--playing hard. Oh boy, I went out swinging.

Right up to the end, I had the widest smile and the biggest brightest eyes.

In 1971, shortly following Louis's death, Lillian collapsed at the piano and had a heart attack on the way to the hospital. Wikipedia notes that the autobiography she was working on, and her personal letters, disappeared shortly after her death.

The back of the book notes include five pages of information including a timeline, bibliography of both primary and secondary sources, and a list of her songs to find online. This is a great curriculum resource for Kindergarten-third graders studying women in the arts, jazz, and African American history. Reluctant readers in fourth-sixth grades will also enjoy the text and pictures.
Here is a youtube short video showing Lil at the piano.

The text is very reader friendly and inspirational. The illustrator's use of yellow throughout the book was magnificent. From Lillian's dresses, to the color of the horns, to the background of several pages--it makes the story pop from the pages.

Leave me a comment by 6 PM on March 12 along with your email address (if you are new to my blog) and I'll enter your name. If you choose to follow my blog, let me know and I'll put your name in twice. U.S. addresses only.
at March 10, 2021

How wonderful! Congrats to both author and illustrator — it sounds lovely!

Thank you for your comment, Winding Ascent. I need your email address to include you in the giveaway!

This book sounds amazing! Would love to have it, If I don't win it I might just purchase it! Thank you.
anom3@yahoo.com

I would love to have a copy of this book. The ending is a fascinating way to show Lil's love of jazz music.

My daughter played in the high school jazz band and I was always amazed at the talent these kids had at improvising. I enjoy instrumental jazz to this day because of my daughter's experience. I have found a lady musician I plan on researching in hopes of writing my own picture book biography. Thank you for the post and sharing this book will one of your followers. This book will also make great mentor text.

Danielle and Melanie, you're in!

Would love to use this as a mentor text and use with my prek/ kindergarten class. I always do a theme on jazz. This would be perfect! Sound like a wonderful read.

I like everything about this book, the illustrator and author did a great job!

I love jazz! This sounds like an inspiring story!

You're in too, Sharon!

This book will be great to give to my niece. I know she'll enjoy it. I'm following your blog.
turtle6422 at gmail dot com

Thanks Jana Leah. You're in!

Jazz was always a big part of things at our house. My husband was a drummer and had a jazz combo when he was young. The book looks great. Thanks for telling me about it.

Please enter me in the contest! Love the part where it says she played hymns for Sunday School with a beat!!

YOu got it, trish! Carol

Rosi and Mona--you're both in too. Thanks for stopping by.

Carol,
What a wonderful book and blog post! It has me thinking of listening to more jazz. I won't enter due to the fact I've won so many from you in the past.

Thank you Carol for introducing me to "Born to Swing"I love picture book biographies. I especially love learning that she waa famous for her amazing talent in jazz and it has nothing to do with her future husband.I am also very intrigued about her autobiography notes/letters disappearing after her death...seems like another story ....

Thanks, Kathleen! Your name is in.