Just Around Midnight: Rock and Roll and The Racial Imagination- A Review and Audio Book Giveaway

Congratulations to Joan Edwards, a faithful follower of this blog, for winning Cleo Edison Oliver in Persuasion Power on last week's post. 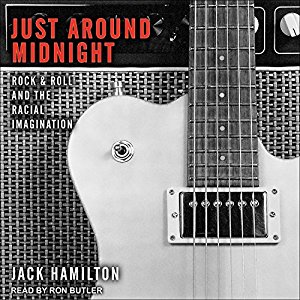 I stumbled upon JUST AROUND MIDNIGHT: ROCK AND ROLL AND THE RACIAL IMAGINATION (Harvard University Press, 2016) while perusing Tantor Audio's huge list of audio books. Here's the blurb that drew my attention:

Rooted in rhythm-and-blues pioneered by black musicians, 1950s rock and roll was racially inclusive and attracted listeners and performers across the color line. In the 1960s, however, rock and roll gave way to rock: a new musical ideal regarded as more serious, more artistic-and the province of white musicians. Decoding the racial discourses that have distorted standard histories of rock music, Jack Hamilton underscores how ideas of "authenticity" have blinded us to rock's inextricably interracial artistic enterprise.

I requested the book thinking it might inform my novel, Half-Truths. To be honest, it was a scholarly (yet accessible) work that far exceeded my expectations. All it lacked were snippets from the multitude of songs and albums the author referenced.

I grew up in the 60's singing to the music coming from my father's transistor radio. I had no idea the cultural interchanges between white and black cultures that went on behind the scenes producing the lyrics I sang. I also did not know the personal life stories of the musicians. The author's extensive research and knowledge of music created a rich backdrop for this tumultuous time period.

Here is just a sprinkling of the issues Hamilton addressed that I never considered as a teeny bopper listening to music at our neighborhood pool.

The narrator, Ron Butler, did an excellent job. I could listen to him read any book! Here is a sample from MIDNIGHT. If you are interested in delving into the cultural and musical environment of the 50's-early 70's, then this is a book for you.

I'm giving away the MP3-CD that I received from Tantor Audio. It is encoded in MP3 format and is iPod ready but will play only on CD and DVD players or computers that have ability to play MP3 formatted disks. (That meant I could play it in one of our cars but not the other and it didn't work on an old CD player.) Please leave your email address if you are new to my blog. Giveaway ends June 2.

Dear Carol, thanks for sharing Just around Midnight by Hamilton. It sounds like an interesting explanation of the history of the music.

Thanks for giving me the opportunity to win the Cleo book. It will help me never give up!

This sounds amazing. My son-in-law would love this and listens to audio books all the time. Please include me in the drawing this time. I could use some son-in-law points. 8-)

You're all in, Joan, Rosi, and LInda. And yes LInda, I think I'll listen to the Beatles with new understanding!

Sounds like an interesting "read" or listen, Carol. Dale and I are taking some driving trips this summer, so audio books are always welcome.
Did you know that Elvis got his early musical grounding in Black Gospel Music?
Janis Joplin had a spectacular voice until she made a concerted effort to ruin it and herself.
If you have a Sirius/XM subscription, check out the new Beatles channel, #18.
I was in my 20s during the 60s, and listened mostly to Classical, Folk and jazz, so I came to the Beatles, Stones, etc. late. Thanks for sharing this info. Sarah

Thanks, Sarah. Sounds as if you'd enjoy this book. Yes, I believe Hamilton mentions Elvis's early roots. It was a lot to keep track of!

I know that I'm late to the game with commenting, but I'm so interested in this history and how it impacts the culture of music and race relations today. Thanks so much for sharing - it's going right onto my 'To Read' list!