The Pursuit of Italy: A History of a Land, Its Regions, and Their Peoples- An Audio Book Review and Giveaway. Part II

Please see last week’s blog for the first part of my review of the audio CD of The Pursuit of Italy: A History of a Land, its Regions, and the People. What follows is only a sampling of what Gilmour covers in this comprehensive history of a country he obviously loves. You have to read (or listen) to the book to glean all that I’ve left out. 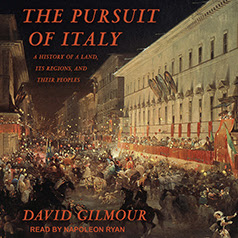 The glorious revolution of 1848 marked a new beginning for Italy. General Giuseppe Garibaldi, a self-declared freedom fighter who is considered to be Italy’s George Washington, was one of Italy’s “father of the fatherland.” Along with Camillo Benso, Count of Cavour, Victor Emmanuel II and Giuseppe Mazzini, this generation of giants carried out the unification of the eleven states, kingdoms, and duchies. Although the revolution was lost and Italy continued to be divided with Austria dominating the north, the stage was set to build a nation. Under Garibaldi and Mazzini, attempts were made to improve the lives of the poor, provide secular education, and give freedom to the press. Interestingly, Garibaldi declined the invitation to fight for the Union when he realized he wouldn’t be made commander-in-chief and thus could not abolish slavery.

Italian nationalism was not easily won and actually came about after the state was formed. In 1899 Giustino Fortunato declared that unification was “A sin against history and geography” because it ruined the south. “We are too long a country! The head and the tail will never touch each other. If made to do so, it would mean the head biting the tail.”

Verdi became a symbol of Italian aspirations. Although he was acclaimed as the great unifier, this was only a mystic fusion of his music with longed for unity of the nation. In fact, this was political revisionism: Verdi was not the great hoped-for unifier.

Gilmour is convinced that liberals, Catholics, and socialists underestimated fascist Mussolini. As prime minister, he ruled the country from 1922-1943 and didn’t need a revolution or coup to gain power. He took it constitutionally. No one seemed to take notice when he started taking over positions and squads began beating and killing political opponents. Fascism was like a religion which became equated with Mussolini. It was a technique to acquire power, and along the way, promote virility and maternity. Having just learned the word pastiche, I was interested in Gilmour’s description of Mussolini’s architecture as a pastiche of classism and fascism.

No history of Italy is complete without the inclusion of the Mafioso. Begun in the mid-1800’s as a secret society in Sicily- an island that wanted autonomy for centuries--no one wanted to admit that the Mafia existed. Under Mussolini, he declared that the Mafiosi was destroyed. As a result, the press couldn’t report their rampant murders and robberies. Mussolini didn’t realize that the Mafia was a way of life, not just a sinister organization that could be extinguished through oppression.

During the latter part of the 20th century, the Mafioso grew stronger as their tentacles reached further into the government. Laws to criminalize the Mafioso were difficult to enforce. The Cammora rivaled the Mafia in its scale of violence. Between the two of them they were murdering on average over 500 people a year—lawmakers, journalists, and anyone who got in their way. “The Italian state had helped make its citizens prosperous, but it failed to provide security or to protect its officials. Politics, prosperity, and corruption seemed to mix very easily.”

Industrialization in the second part of the 20th century made Italy as prosperous as in the Middle Ages, exporting furniture, clothing, glass and ceramics. But it left scars of deforestation, cementing over olive and citrus groves, and damaging the landscape of the country which the author quite obviously deplored.

Silvio Berlusconi, who served as prime minister from 2008-2011, was a self-created politician. He did not help the economy as he promised, ignored Parliament, used his own television stations as his pulpit, and surrounded himself with a gaggle of young women. The Italian people forgave his sexual indiscretions because, after all, he was Italian. He advised women to marry someone as rich and seductive like him. He advised Italian men they could be like him if they tried. He routinely laughed off criticism and blamed everything that went wrong on the communists. He bowed to Rome although he was neither chaste or observant. Uneducated about Italian history or philosophy, he denied Mussolini’s terrorism. It was no surprise that the Mafia’s resurgence in the early 21st century coincided with Berlusconi’s ascendency as it became more invisible, but more invasive.

Gilmour often questions if Italy is truly a nation. As recently as 1994 the two main political parties- Communist and Christian Democracy--dissolved and in 1996 there was a short-lived attempt by northern Italy to secede. In recent years Spain’s GDP surpassed Italy. In 2010, China rivaled Italy in the production of spectacles, glass, shoes and clothing. Lethargy often predominates a country where, in 2008, only 16% of Italians trusted their politicians. In 2011, the 150st celebration of unification, the division between the poorer south and the rich north was still present.

Despite bureaucracy and corruption, Gilmour admits that there is a distinct vibrancy to Italy. His last chapter, “Resilient Italy” discusses the ever-present importance of the family and the provincialism of small towns where Italians still enjoy their local piazzas and churches.

Gilmour concludes that Italians have created some of the world’s greatest art, architecture, music, and one of its finest cuisines, but it has never been as good as the sum of all its parts.

The narrator, Napoleon Ryan, has an authentic British accent which fits the book, since David Gilmour was British and lived in Italy for many years. Ryan pronounced the Italian names perfectly which added authenticity to this audio book. Click here for an audio clip of the book.

Leave me a comment by January 12th (with your email address if you are new to my blog) to enter the giveaway.
at January 08, 2018

Carol, thanks for another great look at The Pursuit of Italy. There is apparently a wealth of information for history lovers and those fascinated with Italy and its culture.
Blessings!
Connie
cps1950(at)gmail(dot)com

thanks, Connie! Your name is in twice!

This looks amazing to listen to. Becontent360@gmail.com

Thanks, Janet. Nice to hear from you. Will add your name to the list!

My father would love this. He is from Italy. Thanks! missdi66@gmail.com

I Bet he would, Diana. Happy to add your name! Thank you for visiting my blog.

I love to tour the world via audiobooks! This sounds like an awesome trip! Thanks for your giveaway!

And you are in twice, LInda!

This really does sound good, and we are a history loving family. I suspect this audio book would be passed around my family for months. I'd like to have my name in the hat please.

Happy to add your name, Rosi.