In honor of Black History Month the Charlotte Mecklenburg Public Library is hosting a series of documentaries highlighting local African American history. The four films were produced by WBTV reporter Steve Crump; click here to see the schedule (scroll down to films).

Today I saw the first movie, Lessons from the Lunch Counter, which recounts the Greensboro lunch counter sit-in fifty years ago. The non-violent protests began with four African American students from A&T College and were followed by similar sit-ins at several lunch counters in Charlotte. From there, the movement spread to other southern cities.

This photograph was taken of several Johnson C. Smith students demanding service at a Woolworth's lunch counter. In Charlotte, store owners responded to the situation by closing the lunch counters all together. With falling sales, five months later the sore managers re-opened the counters and served the black community. Although it might have been a decision forced by economics, it proved to be instrumental in leading to the desegregation of other public facilities and the eventual end of Jim Crow laws.

The documentary interviewed protesters as well as area historians. A professor commented that one of the reasons the lunch counter desegregation was so significant was that it was taboo for people of different races to eat together. Sharing a meal implied equality and common respect. People I have interviewed for my novel have confirmed this truth. They have recounted how the black help ate with separate utensils, plates, and glassware; sometimes outside the house itself.

As Crump said when he introduced this film, if you live in Charlotte, N.C., this is part of the story in our own backyard.

Not too far down the interstate, this photograph was taken in Durham, NC in 1940. Notice the signs for "White" and "Colored." 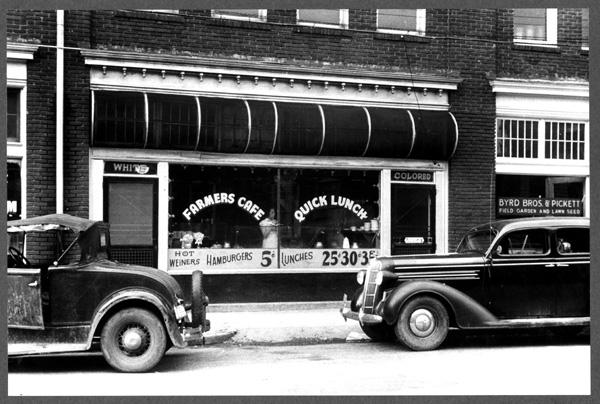 Fifty years ago, dedicated college students impacted history in ways they could never have foreseen.