When the Writing is on the Wall

Last year when I traveled with my husband through Austria, Germany, and the Czech Republic, I was interested in the tags and graffiti which I saw. I found this tag in Nuremberg, Germany: 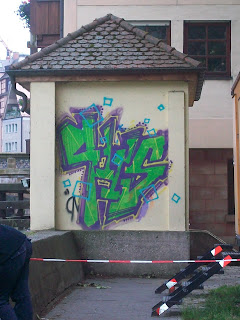 And this graffiti in another part of that city: 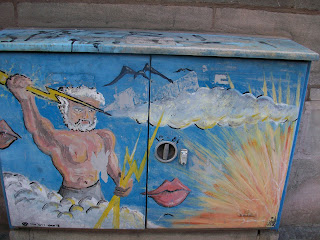 Looking at them, I remembered an article that I had read a few years previous in the Journal of Adolescent and Adult Literacy. According to Laurie MacGillivray and Margaret Sauceda Curwen, authors of "Tagging as a Social Literary Practice" (Journal of Adolescent and Adult Literacy (pp. 354–369) doi:10.1598/JAAL.50.5.3), tagging is "not simply an act of vandalism or violence; it is a social practice with its own rules and codes—a literacy practice imbued with intent and meaning."

Although the authors acknowledged the vast amount of money spent on cleaning up street writing, they believe that this is a meaningful form of literacy. According to them, "Tags can be a youth’s signature moniker, a slogan, a protest, a message, and occasionally a lengthy tribute. They differ from graffiti in that they always consist of letters in which alphabetic style, use of colors, and crafted script is highly valued. Inventiveness, flexibility, and playfulness with textual spellings and meanings are integral to the tagging community. Rarely recognized by outsiders, highly stylized script, one of the main characteristics of tagging, is often only readable by tagging insiders. (p. 358.)

A tag in Toledo, Spain: 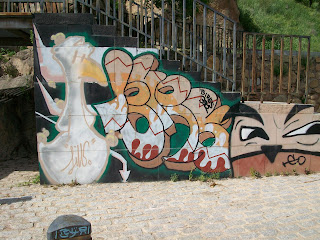 And from a park in Oviedo, Spain: 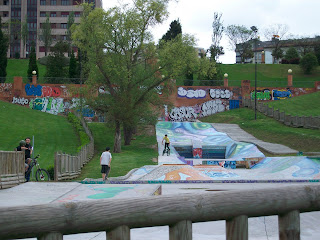 The authors found that tagging accomplished several purposes. It sustained social relationships, was a form of dialogue and conversation, was a means to declare membership in a particular tagging crew (which was safer than a gang), provided commentary on larger societal issues, and a way to display talent. 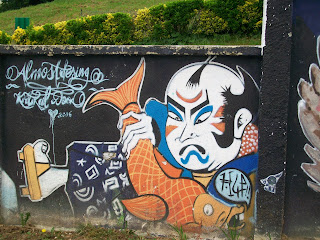 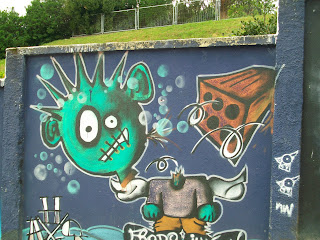 The authors recommended that, "When educators open up the curriculum using students’ everyday literacy interests as starting points, they can also attend to issues of power, authenticity, and culture embedded in the social practices (p. 368).


Something to think about next time you see graffiti, tags, or street art.

I'm always fascinated by the tags in Europe but didn't know that is what they are called.

I think "tags" are now in lots of different locations- U.S., Europe, who knows where else? GOing to have to travel to other continents to check it out!

Interesting. I still think in the US that most "tagging" is considered offensive and/or graffiti and so public officials try to stop them in their tracks. Me, some of the street art or "tagging" or "graffiti" is so wonderful in all its glory that I think it's a waste of the public officials' money and time to try to cover it up. These kids are expressing themselves (for the most part because I'm sure there are many adults who tag) and that is healthier than keeping things quiet and inside.

I don't think tagging should be vulgar to get a point across but it's such an art form that truly the public can see a need for it. Most can enhance an area rather be destructive. I say let's let them express themselves without defacing or being vulgar, let the walls be their canvases.

Okay that's just a stand on what tagging can be to the youth of today.

It is an interesting post and the pictures are really great - thanks for sharing with us - E :)

I read an interesting article (can't remember where) about traveling graffiti painted on railroad boxcars. They are more likely tags, really.

Since reading that article I've taken notice of the art that passes in front of me any time I stop for a RR Xing.

According to the article each artist has a characteristic style, and details that are specific to the art's geographic origin.

As the art travels coast-to-coast, north to south it is amended by other "artists."

Take a look the next time you are sitting at a Xing.

Thanks for your comments ladies. Actually, I have mixed feelings about it. In some places, the art definitely added to the space (like in a park frequented by teens) but then to see graffiti on top of very historic buildings... I had a hard time with that. I hadn't ever thought about it as a form of literacy and communication until I read that article; so I thought I'd share the ideas.

What a great blog post, Carol. Thanks for sharing the link! I have mixed feelings about graffiti, too. Makes sense, given that you'd probably give a good deal of thought to placement and other design elements with ANY artwork, anywhere.