If you want to teach your child or student what the word "empathy" means, then read Mockingbird together. The author, Kathryn Erskine, takes you inside the heart, mind and body of 10-year-old Caitlin who has Asperger's syndrome. The recent recipient of the 2010 National Book Award for Young People's Literature, this book well-deserves the award. 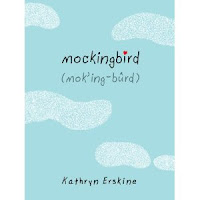 Caitlin's brother Devon was just shot and killed in a random shooting at his middle school. Caitlin and her father are left with a huge weight of grief as well as Devon's incompleted Eagle Scout project, a wooden chest draped in a gray sheet that sits in the middle of their living room. In Caitlin's words it looks like a "...bird that is trying to fly but never getting anywhere. Just floating and falling. Floating and falling." (p. 2) A description that applies equally to Caitlin and her father.

In the world of Asperger's, the reader discovers how difficult it is for Devon to not only make sense of her overwhelming grief, but also how to function in school and relate to other 5th-graders. When her counselor suggests she learn social skills by befriending a younger student, Caitlin is drawn to a first-grader who she figures out is sad. This is Caitlin's first step towards healing and empathy as she befriends Michael whose mother died in the same tragedy.

There are so many wonderful parts of this book that I find it difficult to share just one selection. But since I appreciate how Erskine skillfully used one of my favorite books, To Kill a Mockingbird, in this book; here is a section where Caitlin is remembering watching the movie with Devon, who nicknamed her "Scout."


The first time we watched To Kill a Mockingbird I waited through the whole movie for the dad to shoot a mockingbird. He'd already shot a dog. And he was a good shot. No one shot a bird for the whole entire movie. At the end I said it was the stupidest name ever for a movie. Devon said I didn't know what I was talking about. This year he reads it in English and he said the title makes perfect sense and this is what it means:
It's wrong to shoot someone who is innocent and was never going to hurt you in the first place.
I still don't Get It and said, But you told me the dog was sick and he WAS going to hurt them.
And Devon said, "It's not about the dog! It's about people! You shouldn't hurt innocent people Scout. That's what it means.
I guess the evil school shooters didn't listen in English class because they did not Get the meaning of that book at all. (p. 80)
Typically children read books in which the protagonist is older than themselves. That would put this book in the hands of young elementary students and in Caitlin's own words, I'm not sure they'd "Get it." But like The Boy in the Striped Pajamas that also has a young protagonist, perhaps this book will be read at many age levels--from children through adult--and that each reader will take away something different from the book.

As long as part of what each reader takes away is empathy--then I'm good with that.

Email ThisBlogThis!Share to TwitterShare to FacebookShare to Pinterest
Labels: book for boys and girls, empathy, Kathryn Erskine, Mockingbird, The Boy in the Striped Pajamas, To Kill a Mockingbird

Thanks for the review of this great book. I read it a few years ago in ARC form and am ready to reread it!

Tomorrow (Wednesday) is the big day when the National Book Award is announced. Fingers crossed for Kathy and Mockingbird!

Sounds like a wonderful book, Carol. As usual, my TBR list is growing higher with each book you recommend. :)