Giving Away Glory Be! 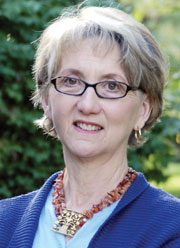 Yesterday Augusta Scattergood's debut novel, Glory Be was released. In this interview she reveals some of the "story behind the story" that I expect will be interesting to writers and readers alike.  At the end are directions how you can enter to win a copy of this book.

CAROL: Is there a part of your life in Glory Be? If so, how did you incorporate it into your story?
AUGUSTA: There is so much of my life in this story. The two sisters are (very loosely) based on my sister and me .  But she’s not really like Glory as much as I’m like the bossy older sister, Jesslyn!

Some of the history is part of me. Glory Be takes place during 1964, Freedom Summer. Like Glory, I lived in a small town in the Mississippi Delta most of my life, so I was there. My friends and I were very innocent about what was going on around us. Maybe that’s why I wanted to give Glory a little spirit, even a “cause” to fight for.  It was hard to write the parts that dealt with hatred and meanness, but so many young readers don’t know a lot about the Civil Rights Movement, about Freedom Summer, and this is a story told from a young girl’s point of view about a situation that could have happened.
CAROL: Can you tell me some of the "story behind the story"? Where did the idea come from, how many forms did it take before you realized it was a novel?
AUGUSTA:  Glory Be actually started life as a short story for adults, titled Junk Poker. It took place during the summer, when the sisters (like my sister and I) played a forbidden game of Blackjack while they were supposed to be resting from the heat.  I wrote that 10 years ago. The maid was originally a wedding planner.  Quickly I realized I was telling a story for middle grade readers, and the wedding planner left the story.
CAROL:  How many revisions did you go through?
AUGUSTA: More than I can count! I wrote the bare bones of a middle grade historical during a terrific workshop class at The New School in New York eight years ago. It’s had a lot of revisions!
In the year before my agent accepted me (after she’d told me she loved the story but it wasn’t quite ready for subbing), it went through three big revisions- two on my own and a last look with freelance editor extraordinaire, Joyce Sweeney. I didn’t make a lot of significant changes in the characters or the setting, or the basic plot. But I had to kill off a couple of my favorites things. I’ve saved them for for another story.
CAROL: Do you have an agent?
AUGUSTA: I found my agent at the Maryland SCBWI conference. I met her when she critiqued the beginning chapters of a different MS of mine. She liked it and asked to see it all. After what seemed like an eternity, she said it wasn’t ready. The next summer, I returned to that same weekend conference. I took Glory Be to be critiqued by a different agent. He liked it. But first I sent it to Agent #1, as an exclusive. Turns out she loves middle grade, is a fan of historical fiction, and even lived in the South and married a southerner! So she got it. Her name is Linda Pratt, and we have become good friends and have a great professional connection.
CAROL:  Can you share any tips on writing/publishing?
AUGUSTA: Read everything in your genre that you can get your hands on. The hot-off-the-press stuff, the Newbery winners, the kids’ favorites. I had a distinct advantage, having been a school librarian for 20 years. When I left that profession to write, a friend had started a website about the South: USA Deepsouth. This was pre-blogging, and really almost before there were many websites like it. I offered to write book reviews of books about the South. That mushroomed into writing for other publications. I know that helped.
Then just as I was getting serious about the submission process, I took a one-day workshop at Media Bistro in New York, run by Joy Peskin, an editor for Viking. After the workshop, some of us sat around and talked about “how to get published.” This was 2008. A blog was suggested. I went home that night and started blogging about books and writing. I think that gave me an online presence so that my to-be agent and anybody she subbed to could find me easily. That sounds so obvious now with Facebook and all the other connections writers make.
CAROL:  What's next? Are you working on a second book?
AUGUSTA: Am I ever. The same book Linda said wasn’t ready in 2009 still isn’t ready! But it’s getting closer. It’s another middle grade. Kind of historical, in that it’s set in 1974.  I actually have another teensy idea for a third book, set in Mississippi. Also in the past. Teensy idea in that I know the characters’ names and a little bit about them. I’m hoping they’ll soon tell me their story. That would help, wouldn’t it?
Thank you, Augusta, for sharing your journey with us. I wish you much success in this debut novel and next time you have a party and celebrate with a Glory Be cake...I want a piece! 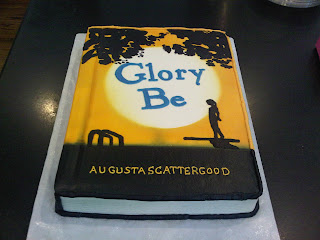 ********
Meanwhile, be the first of your friends to read this book. To win an autographed copy, share this post on Facebook or Twitter and leave me a comment sharing which you did. I will pick a winner on January 7th. Maybe it will be you!


ADDED BONUS: If you don't already follow my blog,  sign up to be a follower and tell me that that in your comment. As a "thank you" I'll enter your name twice!!
at January 02, 2012

I tweeted and joined. Looks like a great read!

Thanks, Grier. Your name has been entered twice!

Wonderful interview and I'm so thrilled for Gusty. I've known this story since its Junk Poker days.

I also did both! But, I have to admit I finished Glory Be and I loved it. Looking forward to reading your blog which I also shared with my daughter who is currently working on her first novel.

I also did both. I read Glory Be and I loved it.

I shared on facebook, joined, and look forward to reading this!

I enjoyed the interview, I shared on facebook and joined. And especially look forward to reading this!

Leslie and Frances- thanks for leaving comments and sharing this with others. Leslie, you're ahead of the rest of us--having read the book already. I still need to order my copy! Thanks for sharing my blog with your daughter. She can commiserate with my journey!

This sounds like a book I need to read - so does my daughter!

Carol, I joined and put on Facebook...and forwarded to my current school librarian. Gusty was the librarian at the school I taught at in NJ. Really looking forward to reading this...

I signed up and posted and will be forwarding the post to my current school libraian...Gusty was my school librarian when I taught in NJ.

Donna and Patti,
Thanks for leaving comments and sharing this post and the contest. Patti--so neat that you & Leslie have known Augusta for so long. YOu all must be very proud of her!

I haven't read the book, but I hope to soon. The sister relationship resonates with me. Great interview, Carol. Congratulations to Augusta! I'll tweet & FB this post.

Glory Be sounds like a wonderful and important read for middle graders. I'm so glad you are spreading the word, Carol.

Glory Be sounds like a wonderful and important read for middle graders. I'm so glad you are spreading the word, Carol.

Thanks Bonnie and Clara. I entered both your names in the contest.

Thanks for this post. Having written a semi-autobiographical book about my sister and myself made it especially interesting to read about the author's journey.

I grew up in the 60s and remember well some of the Civil Rights-related events of that era. I'd love to win a copy of GLORY BE, to experience that time from another perspective.

(Just joined this blog--glad to meet you--and am going to post your contest on FB.)

You're "in" Becky! Thanks for entering.

Melodye- Thanks for entering the contest, your name is in twice. And thanks for following my blog too! Where did you grow up?

Carol, my father was an itinerant (Pentecostal) preacher, so we crisscrossed the country all the time & lived in more places than I can count. As you might well imagine, my father held a lot of revival meetings in the South.... :)

Well, Melodye, you certainly have some stories to tell yourself!

Just posted this to my Facebook page and have subscribed to your blog. So glad I found it. Thank you!

Thanks Beth, for joining the contest and my blog!

Tweeted and enjoyed reading your Glory Be! blog. Knowing Augusta, this is the wonderful result of her hard work and persistence. We'll be reading more of her work in the near future, I'm convinced.

Thanks, "Sophie's Mom" for joining our ranks of entries!