Congratulations to Nancy Frederick who won SHE STARTED IT ALL on last week's blog.

PURITAN GIRL, MOHAWK GIRL (Amulet Books, 2017) written by John Demos and narrated by Christina Moore, is based on the true story of Eunice Kanenstewnhawi Williams who was kidnapped (along with her family) by the Mohawks when she was seven and taken to Canada. The attack on Deerfield Village, where she lived with her Puritan minister father, John Williams, her mother Eunice, and siblings, was in 1704. This attack was part of a series of raids and conflicts between the English and French as part of Queen Anne's War. As Demos notes in the prologue, different Native Americans tribes allied with both countries. 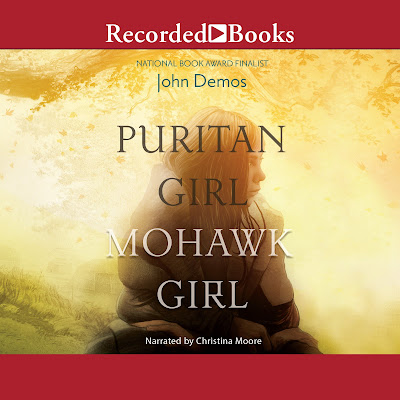 Like Sandra Warren whose book, SHE STARTED IT ALL, was reviewed last week, John Demos wrote this work of fiction after researching and writing a nonfiction account The Unredeemed Captive: A Family Story from Early America which was published in 1995.

I presume that the author used John Williams book, The Redeemed Captive, his account of being kidnapped and returned to Massachusetts. (The hard copy of PURITAN GIRL, MOHAWK GIRL includes substantial author's notes on the historical documentation along with details filled in by the author's knowledge of French Canadian, Puritan, and Mohawk customs and beliefs. Unfortunately these were not a part of the audio recording.)

The story graphically depicts Eunice's capture, the death of her mother and younger sister, and her abduction by the Mohawks. She is adopted by a woman who has lost her daughter. One year later, John Williams travels to try and get her back but is rebuffed by the chief who says that she belongs to them now. He leaves with the image of Eunice begging him to take her back home.

Eunice receives a Mohawk name (Waongote), learns the language, and the history of the tribe. Two years later when a trader comes to the village and tries to convince her to come home, she has no desire to leave her Mohawk family and has totally forgotten the English language. When her father hears of this, it is a source of great grief and sorrow and he never truly gives up hope that she will return.

When she is a teen of marriageable age, she receives the name Kanenstewnhawi and marries a Mohawk man who has already converted to Catholicism. The priests didn’t want to marry them in the church knowing how her father and the English will be upset that she was married as a Catholic Mohawk. They also didn’t want them to live in sin, so they're faced with a political and spiritual dilemma. The couple ends up getting married in a very small ceremony in the church. The priests want to keep it secret, but news gets back to her father through traders. Reverand Williams was shocked. How could she become Catholic and marry a savage?

As an adult, memories finally return to her of her former life and the raid; she blames her father for her mother's death. Long after her father dies, she returns to Massachusetts to see her brothers. Despite her family's prayers and petitions, she remains a Mohawk until her death. She is interested in receiving her share of her father's estate but is unable to receive it as a Mohawk.

John Demos certainly dug deep to write this story, but the book reads more like an historical narrative than a work of fiction. The reader will gain a lot of information about the French Mohawks as well as the conflict between the Puritans and Catholics during colonial times, but the narrator tells the story, rather than Eunice herself. This distant storytelling technique make the novel less immersive. Other book reviewers mention this problem likening it more to a biography than a work of historical fiction.

Although I can't dispute Mr. Demos's research, it feels like a bit of a stretch that Eunice is so immersed in the Mohawk culture that she totally forgets who she is. She is Caucasian with light hair and obviously looked very different than the people around her. Wouldn’t she have questioned that?

These concerns aside, I still think PURITAN GIRL, MOHAWK GIRL would be an interesting curriculum resource that will spark considerable classroom discussion.

Here is a snippet from the book, courtesy of Recorded Books.

If you are interested in entering this giveaway, please leave me a comment along with your email address if you are new to this blog. I will be giving it away in mid-October in conjunction with the fall issue of TALKING STORY on Colonial America.

Hi Carol, I am very interested in this story. Thanks for sharing.
Blessings!
Connie
cps1950(at)gmail(dot)com

Thanks, Connie. I'll start the list with your name!

My mom would enjoy listening to this story as well as me. Thanks for the giveaway!
turtle6422(at)gmail(dot)com

Thanks, Jana Leah. YOu're in!

This sounds like quite a story. Thanks for telling me about it. I will pass on the drawing. I hope you survived the storm okay!

Am not familiar with this story. Thanks for sharing!