It's been awhile since I've shared the books that I read while writing Half-Truths. Here are two more books that have helped me understand one of my characters, Lillian Harris.

If you aren't familiar with Half-Truths, this is the pitch for my book:

Ever since I saw the pictures of the principals in the hallway of the former Rosenwald School in Charlotte, NC and saw a man who appeared White but was Black, I knew that my book would revolve around two girls--Kate Dinsmore and Lillian Harris--who were related but belonged to two different races.

What I didn't know was what Lillian looked like. 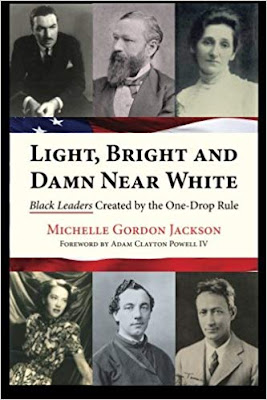 Light, Bright, and Damn Near White by Michelle Gordon Jackson helped me figure that out.

Have you heard of these African American leaders?

Ms. Jackson's book showcases twenty-five light-skinned African Americans who had the opportunity to cross the color line, but chose not to. Many of these men and women from the 18th century to the present, fought for the civil liberties of African Americans, women, and other minorities. Under the American "one-drop rule," these individuals had some African ancestry. But due to race-mixing many of them had Caucasian features. They could easily have passed as white -- but did not.

You may have heard of some of them. Adam Clayton Powell (1908-1972), for example, was described by a reporter as a child who was "white to all appearances, having blue eyes, an aquiline nose, and light, almost blond hair, yet he became a bold effective black leader." (Roi Ottley, p. 64) Powell was an influential representative for almost 30 years and was well-known to several presidents.

You probably haven't heard of the other leaders. Charles Chesnutt (1858-1932) was a literary artist and civil rights activist. "His works candy revealed the cruelty of slavery, societal prejudice, and social injustice... Despite having primarily Caucasian features, Chesnutt knew that his chances for success in the South were minimal... Even as a child, he lamented over the forced estrangement by fellow blacks and spoke frankly about his plight as a Negro who looked white." (p. 114)

Harriet Ann Jacobs (pen name Linda Brent) (1813-1897), was an author, reformer, feminist, abolitionist and relief worker.  Harriet was born a slave in Edenton, North Carolina in 1813. In her autobiography, Incidents in the Life of a Slave Girl, Harriet described her owner's horrific sexual harassment. After escaping from his clutches she hid for almost seven years under her grandmother's porch. During that time a $100 reward was offered for the return of a "light mulatto." She used the Underground Railway to escape to the North; a condensed version of her autobiography was published shortly before the Civil War.

The lives of these brave men and women who could have passed for white, embraced their African American ethnicity. They helped me see Lillian Harris, my important secondary character, in an entirely new light.

This is how Kate reacts when she first sees Lillian at her grandparents' home, "Why does Grandmother have a white girl working for her and why isn’t Auntie Esther taking care of the washing?" 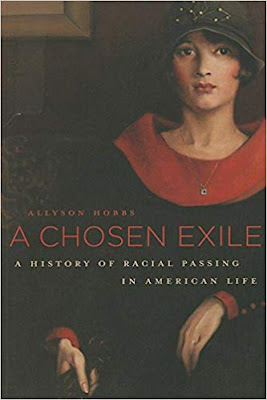 But what about the Blacks who chose to pass? What was their life like?

Allyson Hobbs' book, A Chosen Exile: A History of Racial Passing in American Life, pointedly showed me the pain and difficulties associating with passing.


In a section that reminded me of Mothers of Massive Resistance, the author talks about Walter Plecker who worked tirelessly to enforce the one drop rule:


Doctors and midwives received missives cautioning them that it was illegal to classify any child as white without clear evident that neither parent had a drop of black blood. (p. 131)

Passing, sometimes compelled by the kinds of traumatic confrontations that were recounted in African American autobiographies, provided an unusual yet effective means of authoring one's own life. The practice allowed those who could pass a means of clandestinely navigating the Jim Crow order. Passing offered much, but it could not mend splintered relationships with ones family; it could not ease a deep-rooted sense of alienation and longing for ones people. Passing was unfit for the task, borrowing from Du Bois, of merging two selves "into a better and true self." This curious phenomenon granted economic privileges and societal courtesies, even transformational opportunities for self-fashioning, but often at a terrible cost. (p. 133)

"Crossing over" was a proven strategy for navigating "chilly water"; at the same time, it raised concerns about how black families would remain whole when nearly white relatives moved away, formed new families, and started new lives. The 1926 article in Opportunity hinted at this dilemma framing "this subtle migration" as the "most ambitious offensive ever launched by the sons of Ham," but worrying about "the deliberate annihilation of ethnic affiliation when physical appearance does not proclaim it. (p. 142)

Towards the end of the book, Lillian's father confronts Kate. Kate had thought that if Lillian passed she'd have a ticket into a better life:


“Do you have any idea what happens to a Negro who tries to pass? Lillian’s Aunt Dorothy left Charlotte so she could blend into life in New York City.” Mr. Harris scoffs. “She was barely twenty years old and broke her momma’s heart. Sure, she got herself a fancy radio job and married a white man—but she left her history. Her mother, her sister, all her relations—they don’t exist for her no more. They’re as good as dead.”

I am indebted to Ms. Jackson and Ms. Hobbs for their hard work in writing and publishing these books. As a White woman writing a novel with a main character who is Black, these books are invaluable windows into Lillian Harris's world.

Have you read PASSING by Nella Larsen, the first African American woman to be awarded a Guggenheim fellowship? It's an interesting book. You might enjoy it and find it helpful in some way. Good luck with your writing!

I'm pretty sure I did, Jilanne. I'd have to check my bibliography--I know I read something by her. Thanks for commenting!

Very interesting reading list, Carol. I remember when I was very young seeing a movie called Pinky about a woman who passed for white. Of course, she was played by a white woman (Jeanne Crain), but it left a real impression on me and made me think about racial issues probably for the first time.

Have you read Sinclair Lewis' novel, KINGSBLOOD ROYAL? It made quite an impact on me. I read it on assignment from a high school teacher, when everybody else was either reading F. Scott Fitzgerald or CATCHER IN THE RYE. Good post, Carol. Sarah

Wow, Carole. I know a little of Adam Clayton Powell but not the majority of people/circumstances you mention. Cannot wait to read your book!

Thanks so much for you poignant essay. I've haven't read Jackson's book, but I have read Hobbs'. A Chosen Exile is superb.

By the way, if you are interested in more information on passing, please check out my resources here.

You've done so much good reading and learned so much along the way. I would love to love both of these books. And hiding under a porch for 7 years! Oh my!

Also your passages are powerful and clearly informed by some terrific research!

Thanks so much, Joyce!