Her Fearless Run: A Picture Book Review and Giveaway

Congratulations to Connie Saunders who won Gayle Krause's Once Upon a Twisted Tale on last week's blog. As she's found out, it pays to enter twice!!

Not only do I give away books, but I enter giveaway contests myself. Recently I won Her Fearless Run (Page Books, 2019) by Kim Chafee and illustrated by Ellen Rooney from Kathy Temean's blog. (By the way, if you're interested in writing or illustrating for children, this is a blog you want to follow!) I'm pleased to share this book with you and the young runners in your life. 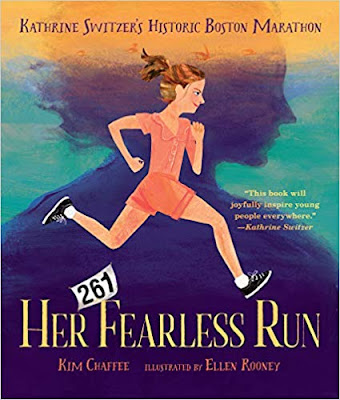 Ever since she was a young girl, Kathrine Switzer loved to run. As a twelve-year-old, she would mark her laps with a piece of chalk on a tree along her route. 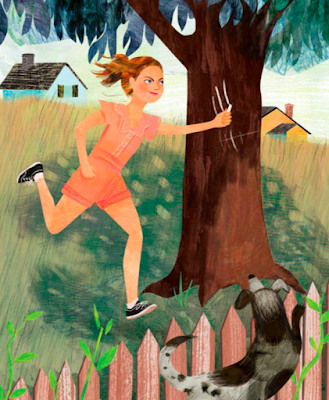 The mailman stared. The milkman asked if she was okay. Because in 1959, it was strange to see a girl running. 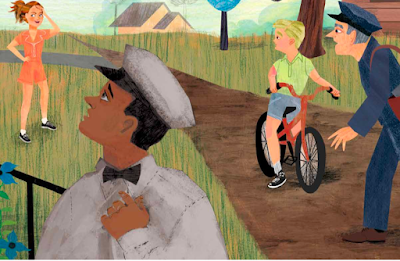 Kathrine loved running so much that when she went to college and didn't find a women's running team, she joined the men's team. She learned about the Boston Marathon and decided she wanted to train for it. When she told the volunteer team manager and her coach, Arnie Briggs, her dream he replied, "Women can't do that kind of distance. They can't run that long." 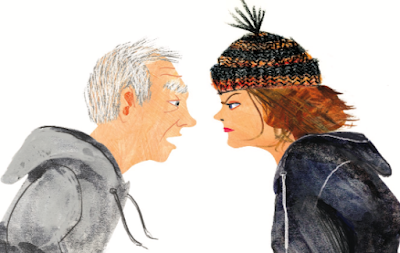 "But I run six or even ten miles with you every night!" Kathrine shot back.

Determined to prove that she could complete the marathon, Kathrine ran despite bitter cold, snowbanks, and swollen toes. She even had to cut triangle wedges out of her sneakers to get them on her feet. 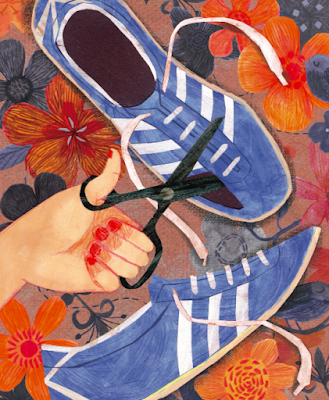 On April 19, 1967, 741 runners registered (a record!) and Kathrine was the only woman with an official number. Even though a race official attempted to push her out of the race, Kathrine ran on.

For a moment, Kathrine wondered if she should quit. She still had twenty-four miles to go.

When she rounded the final corner and crossed the finish line, reporters surrounded her and asked what made her run the Boston Marathon. 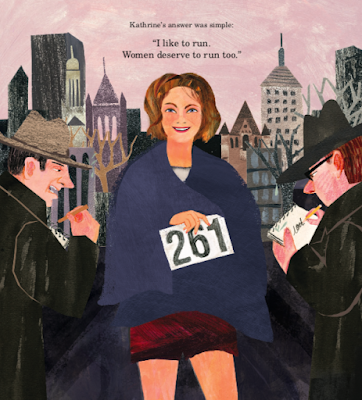 Her answer was simple. "I like to run. Women deserve to run too."

I am giving away this inspirational picture book to one fortunate individual. Share this blog on social media or become a new follower of my blog and I'll enter your name twice. Make sure you tell me what you have done in the comments and leave me your email address if you are new to my blog.

Teachers: You can download a classroom guide for use in grades 1-6.

I've seen this book before and it intrigued me, but after reading your post, I find this woman inspirational. I run every day and have always been able to "sweat" and play sports, so in a way, this female athlete paved my way to fitness. I shared on tumblr: https://yesreaderwriterpoetmusician.tumblr.com/post/185977903767/her-fearless-run-a-picture-book-review-and

Good morning Carol, this looks like a great book. I loved to run and even participated in track for a few years and it appears that Katherine was just a few years older than me if she was 12 in 1959.
Thanks for your giveaway.
I shared on FB & Twitter.
Connie
cps1950(at)gmail(dot)com

Hi Carol, This looks like a wonderful book. I love inspiring biographies for young people! I have shared on FB and with two former teaching colleagues.
Sue

Thank you Connie, Danielle, and Mrs. Reichard. I appreciate you sharing this blog and will put your name in twice. Mrs. Reichard I need your email address in case you win!

What a wonderful Never Give Up story, Carol. Thanks for sharing this biography book, "Her Fearless Run." It's an amazing story.

Thanks for sharing this book with everyone.

It is a wonderful never give up story, Joan. You're in twice--because you kindly showed me my typo! And thanks again, Kathy, for offering this book on your blog.

This book is one I need to pick up. Just reading your review of HER FEARLESS RUN has given me inspiration to move forward on a story about running that's been sitting on the back burner for a very long time. Although it's not about breaking any barriers like Katherine did, it is based on a real life experience I had running a 5K race.

And thanks again for another fabulous review.

Thanks, Sandra. You're in too!

This looks like a terrific book and perhaps a great mentor text. Thanks for telling me about it and for a chance to win a copy!

Hi Carol,
I met you in 2016 at the Highlights workshop, Summer Camp at the Barn. (I live in Chapel Hill, NC.) I just did my second workshop at Highlights, Writing for the Educational Market. It was totally amazing! Today I'm finishing up some samples to send out to educational publishers. Very exciting stuff! I loved the story, HER FEARLESS RUN. It took serious courage to be a female athlete in those days. I played sports in the 70s and it still raised eyebrows. We had old equipment and hand-made uniforms. This book is an important piece of history for kids and adults alike. Thanks for sharing the review. I shared on FB and with literacy coach friends.

Thanks Janet. I'd love to enter your name twice but I need your email address.

Girl Power....LOVE it! Great story and art, Carol. Thanks for introducing us to this story about women who break the mold. xxxx