Obsessed by a Promise: A Review, Author Interview, and Autographed Giveaway

I blogged about the Orphan Train at the time that I reviewed Rory's Promise. When Sandra Warren told me about her new book, I was intrigued to find another book on the subject, this time from the perspective of an adult. 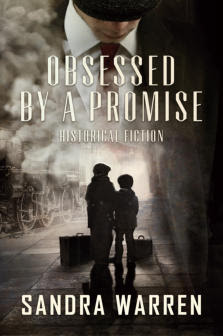 
In this multi-point-of-view "rags to riches" story, the reader meets a young boy, nicknamed Blue, who in 1929 is left in charge of his younger brother, Bo. Blue is devastated when they are separated and he promises that he'll find Bo. This obsession drives Blue (who later goes by his initials, JT) for fifty years.

Living on the streets of New York City, JT gets a lucky break and is taken in by a storekeeper, Mr. O. The kindly man realizes that JT is smart and responsible and gradually gives him more and more responsibility. At the height of the depression a rich man, Mr. Trasinski, comes to the store wanting to sell apples. JT makes a deal with him that saves Mr. Trasinski and his family--something Mr. Trasinski never forgets.

Fast forward two decades, and JT is like Mr. Trasinski's son, working hard for his land development company.  Although JT marries Mr. Trasinski's beautiful daughter, Adrianna, his marriage and the subsequent birth of their son, Jake, is marred by JT's incessant search for Bo. Even his business trips become excuses to find his brother. When he realizes that Bo was taken west on the Orphan Train, JT hopes his search is almost over.  It's not until JT risks losing Jake that he realizes the mistakes he made always putting Bo, his "phantom brother" before the people he truly loved.

Two unexpected twists at the end bring the story to a satisfactory close. This well-researched family saga is full of love, the price of success, grief, and regret.

CAROL: What drew you to the story of the Orphan Train?

SANDRA:  The idea that children, most homeless but not all, could be taken from the streets, put on trains and shipped across country, lined up on a stage and given away, auction style, to couples who asked for them, surprised and horrified me. Even though the concept was developed with good intentions, all I could think of were the pitfalls. When I learned siblings were often separated, the story of Blue and Bo began to unfold.

CAROL: How did you research and for how long?

SANDRA: My introduction to the Orphan Train was back in the late 1990’s. The Internet was in its infant stage of development when I began writing the screenplay so I had to rely on the resources listed in a book I found. My research revolved around the basic facts and a few personal accounts as well as information about the era between 1929 and 1979. Twenty-two years later, when the novel finally came together, the Internet was immensely helpful in fine tuning time and place aspects of the story.

CAROL: Why did you choose different POV?

SANDRA: The story was first written and optioned as a screenplay. Having developed it as such, each character had motivations, flaws, and purpose. It seemed a natural progression to write the novel from different points of view. For me, it was the easiest way to weave the basic facts into the story, allowing each character’s side of the issue to come forward.

CAROL: What were your challenges writing in this manner?

SANDRA: Each character had to appear and behave in a manner different from the others, yet consistent with their role in the story. Having it first written as a screenplay helped tremendously.

CAROL: Who is your readership?

SANDRA: The screenplay was written with adults in mind. However, I’ve had two agents tell me it fit the young adult (YA) genre and what is now called a crossover book.

CAROL: As a self-published author, how are you marketing the book?

SANDRA: The trick is to be creative in getting the word out.

ONE LAST WORD FROM SANDRA: Writing Obsessed By A Promise made my respect for novelists grow immensely. Previously, the longest books I’d written were non-fiction and military memoirs where I gathered the facts and make them readable. It was super challenging to have to create the scene, give it a sense of time and place without appearing to do so, as well as develop characters that can tell the story I wanted told.

Sandra is giving away an autographed copy of Obsessed By A Promise to one fortunate reader. It would make a great holiday gift for the history lover reader on your list. Leave me a comment by December 5 for a chance to win. Double your chances by sharing this post on social media or following my blog. Make sure you leave me your email address and let me know what you did. Continental United States only.

Thank you Carol for the wonderful review of "Obsessed By A Promise." I hope others become as obsessed with the story as I have been, over the years, working to bring it to fruition.

I look forward to sharing a copy with one lucky winner.

Thanks for giving one of my readers the opportunity to win this!

This sounds like a fascinating story. Thank you for sharing it with us!

Thanks Becky, You're in!

I think this book sounds fun to read, especially with the twists you mentioned at the end. Thank you for the chance to win a signed copy too! I follow your blog by email dhammelef(at)gmail(dot)com

YOu're in, Danielle. Thanks for commenting.

I've read the book, Carol, so don't add my name to your list. I did want to say your interview with Sandra filled in some gaps I'd been wondering about myself. This is one fascinating book!

Great review of a great book! Congrats Sandra and Carol.

Dear Carol,
Thanks for interviewing intriguing authors and talk about fascinating books.

Dear Sandra,
You are amazing! I love the variety of books you write.

Never Give Up
Joam

Thanks, Joan. Yes, Sandra is quite prolific!

Oh Id like to be entered for this, too!

I’m always interested in the time period of this story. Our parents grew up in some very hard times, this is a another aspect of life in America .

You're in Keturah, for both books.

Thank you Carol for introducing us to OBSESSED BY A PROMISE.Congratulations Sandra! I love the premise of this story and looking forward to reading it. I hadn't realized it was already out,but it's on my TBR list��.

Thanks, kathleen. Your name is in the hat!

Thank you to ALL for your comments.

I look forward to sharing the book with one lucky winner.
Sandra

Sandra, big congratulations!!! It would make a good movie too. Carol, please put my name in the hat for the book--just in the nick of time too :)

She's working on the screen play, Vijaya. And yes--just in the nick of time!