Rory's Promise: A Review and a Giveaway

Rory is a 12-year-old street smart orphan who keeps her promises.

First, she is determined to keep her promise to her dying mother that she’ll take care of her younger sister, Violet.

Second, she will absolutely not break her promise to five-year-old Violet: Nothing will ever, ever separate them.

It’s just that keeping these promises proves to be a lot more difficult than even spunky, Irish Rory Fitzpatrick ever imagined.
Co-authors, Michaela MacColl and Rosemary Nichols use the facts of the Orphan Trains in this fictionalized account starring Rory as the sharp-witted, courageous heroine.  Between 1853 and 1929 250,000 orphaned, abandoned, or homeless children were put on trains and brought out west. The Children’s Aid Society of New York sponsored many of them. At times, the families used the children for underage labor; this was before there were child labor and foster care laws. On the other hand, The Foundling, a Catholic  organization, took great care to place the orphans in their care in “good, Catholic families.”
Although Rory herself is a fictional character, many of the other characters in the book are real: Sister Anna, the nun in charge of placing the children; George Swayne, the agent who worked with The Foundling; Father Constant Mandlin a young French priest who couldn't communicate well with his parishioners  as well as the white women who were furious when Mexican working-class families received children and they didn’t.
But I am getting ahead of the story.

Rory’s goal to make sure she and Violet stay together drives this story forward. As far as she’s concerned, not even plans to take Vi out west to the Arizona territory will stop her. Although she successfully sneaks on board the orphan’s train, her journey is not without moments of doubt.  Families who couldn’t have children of their own wanted cute little 5-year-olds—but would anyone want her sister also?

But the more happy families she saw, the more she wondered if Vi had a future that might not include Rory. If Vi had a chance for parents and a home, could Rory stand in the way of that?  p. 144

After a stressful journey, when the train finally arrives in Clifton, Arizona Territory everyone is shocked.  First, the stench of sulfur and a building belching dark smoke greet them. Rory soon learns that the town revolves around mining copper. In the small station, a mob of loud, white women pound on the train’s windows.  Later Rory is told,

"This place is bad for making babies. The air is thick with fumes and the water is full of metals from the mines. Nothing grows here. No trees. No babies.”  (pp.171-2)

A new conflict—one based on history—enfolds. The Protestant women believe they have a right to the children since they are the same race and skin color. But the children have been promised to the Mexicans so they can be raised in “good, Catholic homes.”

The white women are demanding and ugly. Rory is actually relieved when Violet and a little boy, William, are assigned to two kind Mexicans, Elena and Ramon Martinez. But her relief that Violet has found a family is tempered by her anguish of wanting to stay with her sister. Can she find a way to convince the Martinez family to adopt her also?
Rory’s concept of family--people who look alike--is challenged and her courage and loyalty are severely tested.  She needs every ounce of her abilities to think quickly and to act fast to help the orphans and to keep her promises.

At the risk of including a spoiler, I must share one of my favorite parts of this book.  At the end, when she tells Violet about the Martinez’s plan to take them both to Mexico Rory says,

"We’ll never see the Foundling again—or Sister Anna or the other kids,” she warned. “We’ll have to learn a new language too, Vi. And there won’t be any American kids to play with. We’ll always be different."

Leave it to a five-year-old to have a different perspective on what their new life will be! 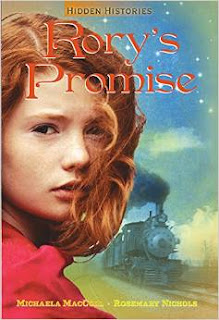 Thanks to the generosity of Boyds Mills Press, I’m giving away a copy of this middle-grade novel for girls.  It documents a little-known period in American history, when Mexican families fought for the right to adopt white children. Also useful as a classroom book, Rory’s Promise will spark some interesting discussions about diversity.  If you are interested in adding this book to your library or donating it to a classroom, please leave a comment by Thursday, June 4. If you are new to my blog, please leave your email address also.

Wow, what an amazing story! I found myself welling up, even while reading your excellent summary. I want to know more about Orphan Trains, about the Foundlings and this period in history. And I want, too, to know how Rory is ultimately able to fulfill her promise.

Thanks, Melodye. Your name is first on the giveaway list!

This sounds like a great story. I'd love to add it to my Little Free Library.

This book has been on my radar for awhile. I sure hope I can get to it soon. Thanks for the review and a chance to win a copy.

Thanks Rosi. You're in!

Carol, I've read quite a few orphan train stories but never one with this angle, with white children being adopted by Mexicans. Fascinating. When I look back to the stories of the Irish Catholics though, I am not surprised. That's what the parents would've wanted. Thanks for a great review.

Thanks, Vijaya- I thought of you as I read this book. I'll enter your name, as well as poetry in leaves' name. Thanks for leaving comments!

Carol,
What a fantastic story. Your summary and review have me wanting more. Another great one to read. You know how to find them! Lots of challenges and tension in this one.

Thanks, Linda. You're in! I'm fortunate to receive books from publishers--as well as to know many great authors myself!

I have every intention of reading this book. Thanks for encouraging me to hurry up on that. It truly sounds terrific.

I've been away and have been caring for my mother. Just read your wonderful blog and got caught up! This sounds wonderful. I will purchase Rory's Promise and enjoy reading. Is it out now?'

Yes, it is! Sheri

Hi Carol, I am playing catch-up on my blog reading. Great review. Thank you for introducing us to RORY'S PROMISE. It is about events in history that I am not familiar with and am now intrigued!

This book has been on my horizon for awhile. I really hope to be able to read it soon. I love the cover! Thanks for your review and a chance to win a copy.

I would absolutely love to win this but I notice that it is dated June 2015?? Great review even if the giveaway is over!
Connie
cps1950 (at)gmail (dot)com

Thank you for reviewing this excellent historical fiction novel, Carol! I have my very own copy signed by Michaela MacColl. Lucky me!