This Promise of Change: A Review and Giveaway

Congratulations to Linda Andersen Gutheil who won FREE LUNCH from last week's blog. She plans to donate it to a local school. Thank you, Linda!

This Promise of Change: One Girl's Story in the Fight for School Equality co-written by Jo Ann Allen Boyce and Debbie Levy is a book you won't be able to put down. Jo Ann Allen was one of twelve students in Clinton, Tn who integrated Clinton High School in 1956. Debbie Levy has given voice to Jo Ann's stories in a unique nonfiction biography that uses more than eight varieties of poetry. That is quite an accomplishment.

But as Jo Ann and Debbie would most likely be quick to acknowledge, their accomplishment pales in comparison to what the twelve students achieved in those difficult months. 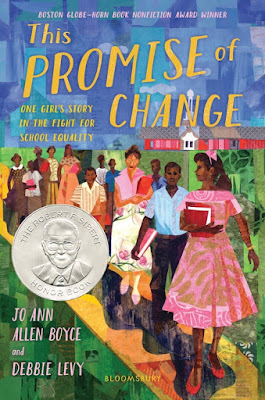 In a book that is told so beautifully through poignant poetry, it is difficult for me to select just a few poems to share with you. Instead, I'm going to bring you snippets from several to entice you to read it yourself. (NOTE: The last line of several poems appear in a slightly larger font. This is a blogger issue; not the way in which they appear in the book. My apologies to the authors.)

Promise opens with a brief description to the Hill where Jo Ann and her family lived, worshiped, played, held concerts, and went to school--until it was time for junior high and high school when the Negro students were bused twenty miles to Knoxville to a Negro high school. This is a stanza from the poem, "MY SCHOOLS," about her elementary school:

... Green McAddo had no cafeteria, no gymnasium
and no indoor bathrooms
until the time I started first grade.
The grammar school in town did,
and also had separate classrooms for every grade,
but that school was whites-only,
and still is. (p.21)

Clinton High School.
Here it is, right close, right down the Hill,
with its solid red brick and clean white trim
for white students only.
We walk by it, not to it,
because it's their school,
big,
but not big enough
for twelve Negro students
who look at it every day
but have never been inside.  (p.25)


When a judge in Knoxville rules that Clinton can no longer ignore the Brown v. Board of Education ruling of 1954,  Clinton High School is forced to integrate. It wasn't that the community, principal, town newspaper, or teachers wanted to, they were had to.

Throughout the book, there are headlines from local and national newspapers and magazines; signs in the town, quotes from the Tennessee constitution, prayers, interviews, and legal rulings. Here is one:


"We have never heard anyone in Clinton say he wanted the integration of students in the schools, but we have heard a great many of the people say: 'We believe in the law. We will obey the ruling of the Court. We have no other lawful choices.""
Editorial in the Clinton Courier-News written by editor Horace V. Wells, Jr. August 30, 1956. (p.62)

At first, Jo Ann thinks that,

If school were weather, I would say it's serious
with a chance of friendly.  (p. 75)


On the second day, she sees protestors and glares on the way to school. She thinks that "clouds [are] rolling in on my forecast."  (p. 78)

This is from the poem, "LEFT UNSAID":

By the end of her first week of school, the shouting and harassing increase. The students stop eating at the cafeteria because it feels unsafe. The sheriff drives them home. People ask if they want to quit and they say no. In the poem, "HEARING/UNHEARING" Jo Ann thinks,

Less than a week later, riots break out in the street. Here are a few stanzas from "PEACEKEEPERS":

The tanks roll in at lunchtime,
a show of growling might,
As if in answer to the prayers
we prayed in fear last night.

Clinton's leaders asked for them;
the governor agreed.
They saw the lawless trampling
of the bigoted stampede. (p. 107)

Tension escalates with the KKK burning crosses on the Hill.

"AND THEN THERE ARE THE THUMBTACKS"

Scattered on our chairs
A prank straight out of cartoons
They think we don't look? (p. 173)

And so I go through the school day
surrounded by a hard shell of silence,
chitchat and cheer bouncing off the walls,
none of it meant for me.  (p. 180)

Eventually, all the "little" acts of hatred add up to too many "BIG THINGS":

Where once they kept their distance,
the white kids who hate us
are up close now, hard on our heels,
truly stepping on our heels--
Gail Ann's are bloody.  (p. 193)


After Thanksgiving break, the twelve students return to hair pulling, hands tearing their books, insults, wicked notes in their locker, nails and eggs thrown at them, and more buttons worn by students which say, KEEP WHITE SCHOOLS WHITE.

The school board suggests they return to Austin High.

Here are two stanzas from "WHAT ARE THEY THINKING?"

This plan is good if you're a fan
of the Klan.
It treats us as less than
every white man.
It can't stand.
We will finish what we began.

The principal closes the school after violence erupts and a pastor is beaten. At an election that follows that event, all the white supremacist candidates lose. Jo Ann calls that, A REAL VICTORY.

Before all this,
before all that happened
happened,
I thought there was nothing I could do
about segregation.
I'm just a girl, I thought,
one girl who tries
to look at the good side of things,
because there's nothing I can do
about the bad.
I'm still that good-side-looking girl.
but now when I see the bad, I'll think--
I'll know---
there's something I can do about it. (p. 233)

As you can tell by the number of poems I quoted, I believe This Promise of Change should be a part of every middle-grade Social Studies curriculum. It is easy to read and even the reluctant reader (or the boy who doesn't like poetry) will be hooked by this riveting true story. The back matter includes information about what happened to each of the twelve students; a scrapbook of photos, notes from both authors, a civil rights timeline, and several pages of resources. The authors also put Clinton, Tn into the context of the Civil Rights struggle.

A MINI-INTERVIEW WITH DEBBIE LEVY

I spent a pleasant thirty minutes chatting with Debbie via Zoom about historical fiction for older middle-grade readers.  I slipped in a few other questions also. For the record, she is now working on a poetry collection and a nonfiction historical picture book. If you look at the list of books she has written, you'll see that many are about social justice. I asked her about this passion and she said,

I seem to return in my books to the theme of the Other or Outsider. Surely this has roots in my Jewish identity, for Jews have been and still are so often the Other. But also, for me the best of Judaism is tied to the quest for justice, and so it is tied to the themes of such books as This Promise of Change and We Shall Overcome. And then there’s my status as the daughter of a refugee. My mother, the protagonist of my nonfiction-in-verse book The Year of Goodbyes (re-released in 2019 in a new edition), was the Other as a girl in Nazi Germany, and when she immigrated to this country in 1938. I cannot emphasize enough her influence on me as a fighter and as a person who was always open to and interested in those who were different from her—treating others as she wished she’d been treated when she was the ultimate Other.

I am giving away this book in conjunction with the summer issue of Talking Story on Community. If you are interested in winning Promise, please leave me a comment along with your email address if you are new to my blog. A winner will be chosen on July 18.

Oh yes, yes, yes, I want this book! What a wonderful, unique idea. Thanks for the review, Carol.

You would love this, Linda!

I would love to win this book to read and review and then share with others. Such an important book to deepen readers' understanding of our history. Thank you for the chance.

YOu're in Danielle. thanks! It's fantastic.

What a wonderful book with an important message!

"Unknown" Please identify yourself so I can include you in the drawing!

Wonderful review and information as always, Carol! I've read this important story and would love to add a copy to my school's library! Thanks so much for the chance.

Thanks, Jolene. It would be a great book for your school library.

I like that this story is told thru poetry. Very unique.
turtle6422 at gmail dot com

That looks like a great book that would be an amazing addition to our middle school social studies curriculum this fall. Thanks for the review!--Gwen Porter

You're both in--Gwen and Jana Leah. I hope you read it even if you don't win it off my blog!

This book was already on my want to read list. I would love a copy.

Thanks for leaving a comment, Jan. It's a great book.