LIST OF TEN: A YA Book Review and TWO Autographed Giveaways!

Congratulations to Connie Saunders who won THE LITTLE THIEVES audio book from last week's blog and to Rosi Hollinbeck who won DIVA DELORES AND THE OPERA HOUSE MOUSE.

Tourette (too-RET) syndrome: a disorder that involves repetitive movements or unwanted sounds (tics) that can't be easily controlled. For instance, you might repeatedly blink your eyes, shrug your shoulders or blurt out unusual sounds or offensive words.

If you've never heard of Tourette syndrome and you're interested in reading a remarkable young adult book which conveys the physical, mental, and psychological pain associated with this disorder, the List of Ten by my friend Halli Gomez is a book for you. 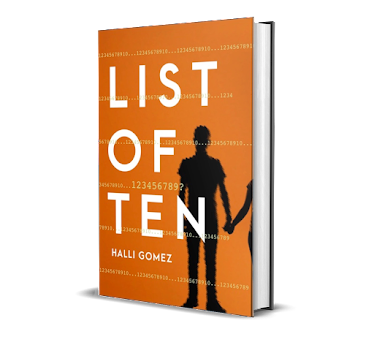 For ten years, sixteen-year-old Troy Hayes has lived with the diagnosis that he shares with his estranged mother: Tourette syndrome. Troy not only suffers from uncontrollable muscle twitches that are accompanied by severe pain, he also has obsessive compulsive disorder. The two together make his academic and social life unbearable. Troy decides that the only way out of his pain is to kill himself.

By page two the reader knows it is only a matter of Troy getting through the other nine items on his "to do" list that he keeps on his phone, before he will take his own life which is #10 on his list.

So, how did Halli Gomez write a 353-page book and keep the reader interested since the ending has already been revealed?

By raising the question--does he do it? And by hooking every reader into hoping and believing that he doesn't.

By using deep point of view, Troy's conflicting thoughts and torturous emotions are shown on the first pages. Through his eyes we meet Khory Price, a girl imprisoned in her own life of pain. She is someone who is able to look beyond his compulsion to touch a dirty floor multiple times as he walks down the school hallway, a girl who finds him cute and smart, and a girl who he becomes afraid to hurt.

The novel is full of teenage angst as Troy moves from just being Khory's math tutor, to being a friend, to becoming her boyfriend. He finally wins her protective parents' trust only to blow it when he tries to drive and his erratic behavior on the road attracts police attention. He's busted for driving without a license and his friend is busted for having marijuana papers in the car. But Troy is no normal teenager. The shadow of his list of ten things to do before he kills himself pervades all of his thoughts and drives many of his choices.

Khory is a well-developed, authentic secondary character. She has struggles with her own parents, guilt over being a surviving twin, and gives Troy reasons to think about his purpose in life.

Beyond amazing "showing not telling" what it feels like to be a person with Tourette, my other favorite parts of the book are when Troy begins wrestling with his decision to kill himself. When his science teacher tells him he has potential, when he is an inspiration to another family whose son has Tourette, when he realizes how Khory will feel when she realizes he lied to her--these were all very authentic and compelling conflicts.

My least favorite part of the book was when Troy's father attempts to have a discussion about sex and ends the conversation by giving his son condoms. I know I'm in the minority,  but I don't believe literature for young adults should include frank permissiveness toward sex.

So, how does List of Ten end? I won't tell you! But, it is satisfying and it is hopeful. And that should be enough to make you want to read it!

As Halli explains in the author's note, when she was eight-years-old, she told her mother she wanted to die. That was when she learned that she had Tourette syndrome; medications and doctors visits became a normal part of her life. A #myownvoices book, Halli wanted others "who have neurological disorders, or who are contemplating suicide, know they are not alone." She has accomplished this in a BIG way. Teens with neurological problems will see themselves and those who don't have similar issues will grow in empathy for someone who faces these challenges. I applaud Halli's transparency in writing a book so close to her emotional home.
For an in-depth author interview, please see The Winged Pen. In this other post, Halli and some other debut authors provide ideas on launching and marketing their books.
Here is a downloadable pdf of discussion questions and resources.

I have two copies of List of Ten to give away and Halli has agreed to personally autograph each one! Please leave me a comment by April 23 with your email address if you are new to my blog. Share this on social media or decide to follow my blog and I'll give you an extra chance to win a copy--just tell me what you do. 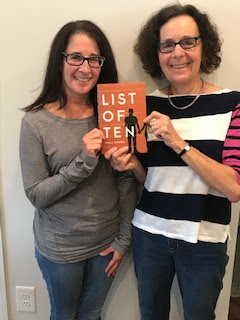 This book sounds fantastic! I just finished reading The Insignificant Events in the Life of a Cactus by Dusti Bowling last night and one of the secondary characters has Tourette Syndrome. I would love to read a YA book featuring the same to see how as a person ages, this condition changes. I know the boy in the middle grade book was afraid he would progress to swearing someday. He also mentioned this syndrome affects boys more than girls. This book you are featuring today is already high on my wish list. I shared on tumblr: https://yesreaderwriterpoetmusician.tumblr.com/post/649094028709756929/list-of-ten-a-ya-book-review-and-two-autographed

Thanks Danielle, and thanks for sharing. I'm getting together with Halli this afternoon for a photo-op--I'll tell her what you said!

Thank you Danielle. I read Dusti's book too and it was wonderful. I really appreciate your interest.

Can't wait to read this one! As someone who suffers from a neurological disorder (and knows several teens who do), books like this are so incredibly important. This has moved from my WANT TO READ list to my MUST READ list. Congratulations Halli on getting this book out there!

Thank you, Carolyn. It is a MUST READ for sure.

This is an important book for all teens. It is definitely going on my books to read list. Thanks for sharing!

Thanks Carol, for stopping by. I'll add your name to the list!

Thanks, Carol for such a great review. I just saw a film about a teacher who faced so many challenges in reaching his goal because of Tourette. We all have our issues but for teens to know they are not alone is so critical.

Thanks, Gail. I agree.

Thank you Carol Gwin Nelson. I feel the same.

Thank you Gail. It is very important to me as well.

Dear Carol,
Thanks for sharing. It's great to have stories that resonate with children who have problems. Do not add my name for the drawing.

I know little about Tourette's. This sounds like a terrific book. I will pass on the giveaway since I just won a book here. Thanks for telling me about this book.

Rosi, That doesn't disqualify you in my book. I think you'd like it so I'm putting your name into the random.org hat!

This book sounds fantastic and I have a special reader in mind for it. Would love to win the book but even if not, I'll be looking into it to see if it's an appropriate gift for the reader I'm thinking of.

Sounds like another "gotta read" book. What a great review, Carol. I look forward to sharing it with one of my granddaughters.

thank you Karissa and Sandra. Sandra-I thought you might be interested in this book for your granddaughters.

Thank you for the review, Carol. And Congratulations Halli!!! I'm so very excited and happy for you! I am really looking forward to reading LIST OF TEN!!

Thank you so much Karissa, Sandra, and Kathleen! I hope when you get a chance to read it you find it meaningful.

Thanks for reviewing this important book, Carol, and Kudos to you, Halli, for speaking out about Tourette Syndrome. I've already devoured my own copy and loved it!