Congratulations to my newest follower, Janet Frenck Sheets who won CAVE DADA PICKY EATER form last week's blog. Here's a hint to my faithful followers. When I offer to give you extra chances by sharing my blog on social media or becoming a new follower, take me up on it! Many times those people win!

Picture book biographies fascinate me. In fact, I'm so intrigued by this genre that I'm writing one myself. I recently had my manuscript critiqued by awesome picture book author, Kirsten Larson, who helped me figure out my story's inciting incident, mid-point, and plot points. I had no idea that Save the Cat elements could be applied to nonfiction picture books! 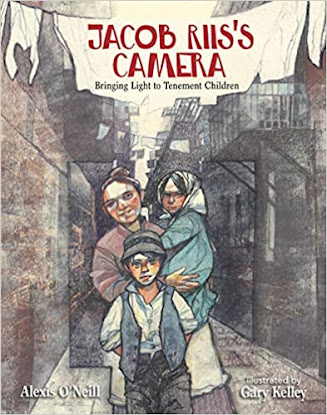 Before Jacob Riis became a ground-breaking photographer, he was a twelve-year-old boy who hated Rag Hall; a rat-infested dwelling in his town of Ribe, Denmark. And before he arrived in America in 1870 to make his fortune and win the rich mill owner's daughter hand in marriage, he became a carpenter.
Jacob soon discovered that "jobs for immigrants were hard to find, hard to keep." He worked whenever he found employment and slept wherever he could; in abandoned barns, field, and in dirty disease-infested homeless shelters.  "He vowed to put an end to them someday."
One evening, the principal of the telegraph school where he'd been taking a course found him penniless and alone. The principal recommended him for a job as a reporter. That inciting incident started Jacob on a path that would change his life forever.
Jacob became a reporter, an editor, and even owned his own newspaper. But then he started working for The New York Times as a police reporter. Every night when he walked home he passed New York City's worst slum, Mulberry Bend. 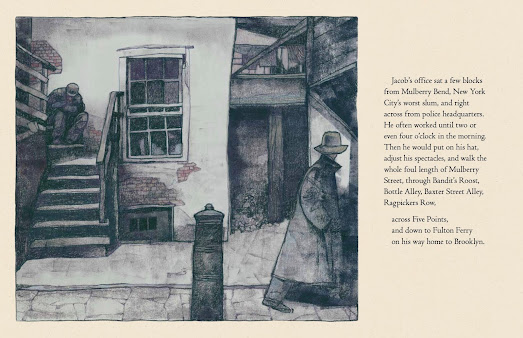 Jacob wrote vivid articles about life in the tenements. Yet his words failed to ignite change. The appalling conditions did not improve.
If only Jacob could show others what he saw in the slums--rooms packed with people, rooms dark both day and night. How could he shine light into those places?
Then one day, Jacob found the answer... 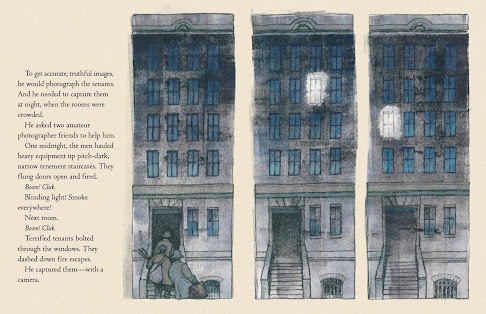 Here's the midpoint of the book: Jacob discovers Blitzlicht, a special flash powder which photographers used to light up dark places. He and two amateur photographers captured pictures of the dark tenements, but they tired of the job.
Jacob did not. He bought a small four-by-five-inch wooden box camera. Here is one of the verse poems scattered throughout the narrative depicting this plot point:

Twice, he set fire to dwellings.

Once, he even set fire to himself.

But he didn't give up.

With words and pictures, Jacob finally found a way to make the Board of Health pay attention. 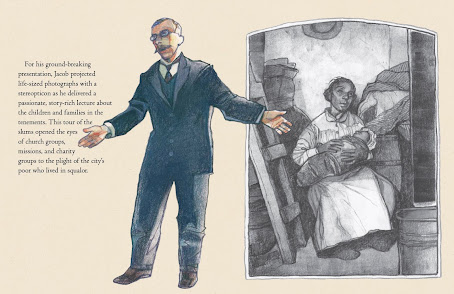 Jacob projected life-sized photographs of the slums to church groups, missions, and charities. Finally, the people of New York City started seeing the "plight of the city's poor who lived in squalor."

In 1890, Jacob published How the Other Half Lives. One of the men who read his book was the newly appointed president of the Police Board, Theodore Roosevelt. The two became life long friends and together they eradicated those slums. 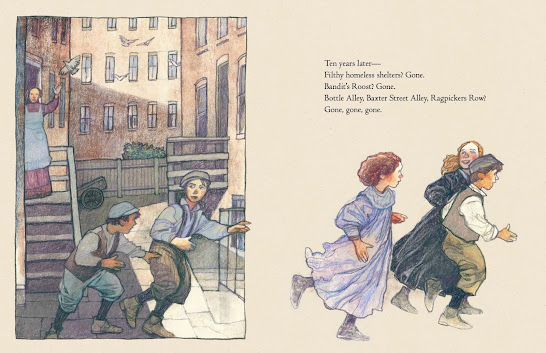 In place of these slums, Mulberry Bend Park opened. A place for children and families. A place

I hope you'll notice the progression of plot points within these sample illustrations. Like Jacob himself, Gary Kelley transformed the dreary slums into places of light and color.

For curriculum resources, including some of Jacob Riis's original photographs, see this page on Alexis O' Neil's website.  The nine pages of back matter include information about Jacob's life, his work, a timeline, a glossary, and an amazing list of his accomplishments.

Here are two videos. The first includes Alexis' journey of writing this book and the many layers that went into it. The second is a presentation using photographs from How the Other Half Lives.

Riis's 'Layman Sermon"
No giveaway this week, I'm saving this book as a curriculum resource for my grandchildren. If you teach 3-6th grade, I think this book would help your students, children, or grandchildren see what poverty looks like--and what a determined person can do to bring about change.
at May 26, 2021

Oh my - this looks amazing! But of course - Calkins Creek, Carolyn Yoder, Alexis O'Neill. I love your reviews, Carol!

I have a few picture book biographies by Claudia Friddell (also Calkins Creek) that I'd love to share with you so you can review. We need to meet for lunch one day!

Thanks, Joyce. I'd love to review them!!

I'm thrilled to win Cave Dada Picky Eater! I'm drawn to humor, so it's my type of fun. But one of the things I'm enjoying about your blog is the variety of featured books. I probably wouldn't come across Jacob Riis's Camera on my own, but now it's on my radar. Thank you!

Great to hear from you again, Janet. Maybe you can request this from your library!

This looks like a terrific picture book. I will have to check it out. Thanks for the heads up.

Was nice talking to you yesterday and of course, I just had to get to the blog to find out about the latest book you reviewed. Can’t wait to find it and share with the grandkids!

I bet your library has it, Jo Lynn. Or ask them to order it!