Without Separation: Prejudice, Segregation, and the Case of Roberto Alvarez- Picture Book Biography and Giveaway

I am happy to be part of the Calkins Creek blog tour for Larry Dane Brimner's new informational book, Without Separation. 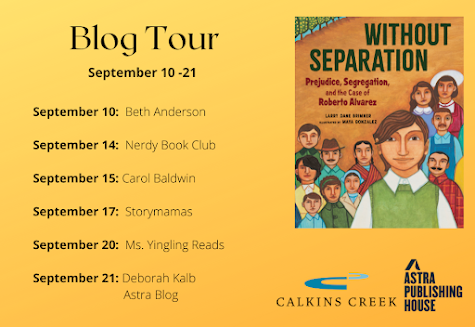 Since I'm interested in writing nonfiction picture books, I've taken several webinars recently with The Writing Barn. (BTW, they're affordable and a fantastic way to learn a new genre!). The last one I took was with Liz Garton Scanlon on "Openings and Endings".

According to Scanlon, the opening of the book is a "promise to the reader. This is a story about a problem and we’re going to get to the end and it’ll be okay." After looking at several picture book beginnings, she showed how the ending brings the story full circle and fulfills that initial promise. In fact, if you only read the beginning and the ending of a picture book, you can guess what you might find in the middle. (Try it sometime with a picture book off your shelf. You'll be amazed at how this works!)

Why am I explaining all of this? Because that's what I found in Without Separation.

On January 8, 1931, Roberto was happy to go back to Lemon Grove Grammar School outside San Diego California. 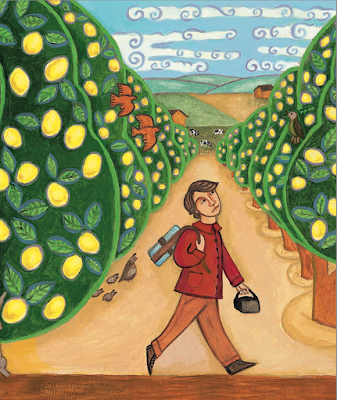 His friends were happy to see him, but he and his Mexican friends were not welcomed by the principal. He told them that their teachers were waiting for them in the Mexican school on Olive Street. 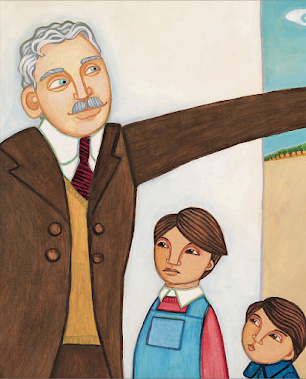 As it turns out, in the summer of 1930, the board of trustees of the school district had met and complained about the Mexican children. They claimed that they held back the white students, were unclean, and a danger to the health of others. A decision was made to build a separate school--but no one told the Mexican parents.

Roberto and his friends refused to go to the new school which they called la caballeriza--the barnyard.  Roberto was a good student and didn't want to attend a separate school. His family agreed. The Mexican families met and recognized that the new school was meant to segregate--not to provide English language instruction.

Roberto was chosen to be the lead plaintiff in the case against the school district. Roberto was perfect for the job: he had been turned away from Lemon Grove, was a good student, and fluent in English. His case could prove that the school board's justification for a new school was false. 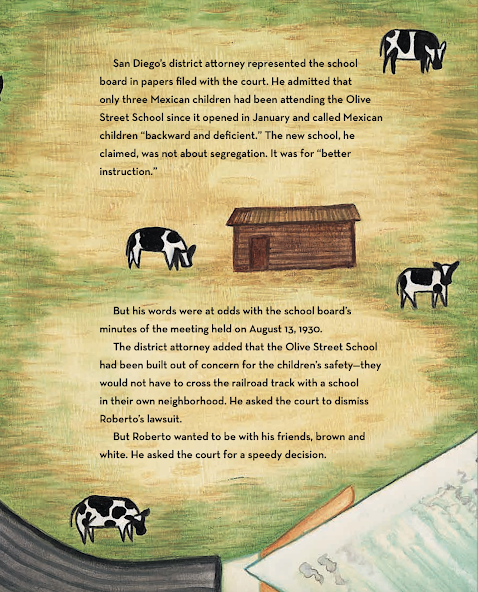 On March 11, 1931 a Supreme Court Justice of California ruled: "The Lemon Grove School District had no power to set up a separate school for Mexican children."

Roberto had won! Not only was this a victory for him, but also for all the Mexican and Mexican American children within the school district. 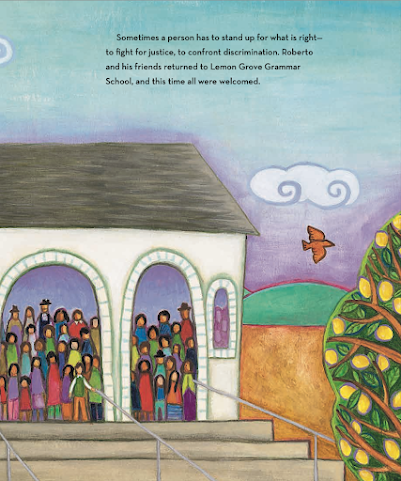 The story comes full circle. At the end, all are welcomed.
As I mentioned in the introduction, Larry Brimner fulfilled his promise to the reader. There is a problem that gets solved and in the end...everything is okay.

This book can be used in 2-4th grade classrooms as classes discuss immigration, prejudice, and segregation. The Author's Note is geared towards older readers and goes into extensive detail about Roberto's case and the historical and geographical context of the court decision. In particular, the author mentioned that this ruling was cited as a precedent before the US Supreme Court made its historical landmark decision of 1954 known as the Brown v. Board of education of Topeka (Kansas).
The acrylic illustrations by Maya Gonzalez are vivid and colorful in keeping with Mexican art and Mexican folk art.

Leave a comment by 6 PM on Friday, September 17 to enter. PLEASE leave your email address if you are new to my blog. In honor of National Hispanic American Heritage Month, if you are Hispanic let me know and I'll enter your name twice.
****

A very needed book at this time. Looking forward to reading this story. Thankyou, for the back story.

A very important topic to lead discussion and understand the history of oppression in this country.

Antoinette, I need your email address to enter your name! thanks for your comment.

This is a new historical event to me and I can't wait to learn more by reading this book. Thank you for sharing the spreads too--the illustrations are fabulous.

You're in, Danielle. It was new to me too.

I'm Latinx and I would love to read this book. I wasn't aware of this particular case. Our kids need to know about past injustices in order to bring about justice and equality now and in the future.

I love Larry Dean Brimner's books. They are always so well done and about such important issues. Please put my name in the hat, but if I win, I'd like you to donate this to your local elementary school or local library. That's where I think it should go. No sense mailing it across the country. I will ask my library to order it, and then I will read it. Thanks for highlighting such an important book.

This would be a great book to share with younger granddaughters or SHARE with my ESL teacher friends. I would love for you to enter my name in the book give away. Thanks! Gail

Happy to enter your name, Gail!

I was so excited to find this book! I'm always interested in reading and sharing picture books about little known events in history. Thank you for sharing!