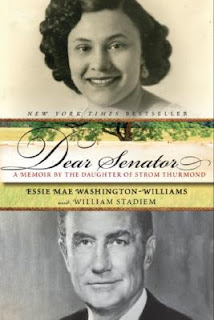 Last week, in my first blog about Dear Senator: A Memoir by the Daughter of Strom Thurmond, I shared highlights of Essie Mae Washington-Williams’ early years and the revelation of her parentage.  This second  post includes some of Essie Mae’s teenage and early adult recollections.

Meeting her father for the first time changed Essie Mae. Always a good student, she tried to use her academic abilities to gain white friends. She wrote,

Knowing that I had a white father somehow emboldened me to do things I would never have done before.

In particular, one time in high school she was caught allowing Gloria- a pretty blond cheerleader who all the boys liked—to cheat off her paper.  When the teacher reprimanded her, she “lectured me about everybody having to stand on her own feet, that if I could stand so nicely on mine, so could Gloria. The implication was that if a poor black girl could do well in math, it should be a piece of cake for the school’s white princess. The idea that Gloria needed “Negro” assistance was beneath her and the school’s dignity. I hung my head and apologized…Gloria never did speak to me one way or the other. P.47

When World War II broke out, Essie Mae learned from Carrie that her father had volunteered.  Her mother explained,

He’s an Edgefield man,” she said proudly. “They need to fight. It’s in their blood. His grandfather was right beside Robert E. Lee when he surrendered. War runs in the family.”

But is it really “our” family? I wanted to ask her. Talk about being the poor relations. We were the invisible relations.
…..

As Coatesville hunkered down for war, I tried my hardest to put Strom Thurmond out of my mind. Yet like a moth to a flame, I couldn’t stop reading about South Carolina and the “Gone with the Wind” world that was at least half my birthright, but it was a birthright I could not claim. I wanted to find out the worst about this forbidden family, so that I could hate them and want nothing to do with them. After all, did they not formerly own slaves? …And what was my father up to? What kind of justice to blacks did he dispense? (p. 56)

These conflicts and questions would haunt Essie Mae for her entire life.

After a brief meeting in a Philadelphia hotel room while Strom was on leave, he shook her hand and saw her and Mary (her aunt) to the door.

“Is he ashamed of me?” I asked Mary when were out in the street.
“Ashamed?” She opened the envelope and counted 200 dollars in twenties, just as before. “Do you call this ashamed?’

Two hundred dollars was indeed a lot of money, but spread out over three years, it wasn’t that much. Wasn’t a daughter worth more than that? “That doesn’t mean he cares about me,” I said.

This pattern of secret meetings and money gifts continued long into Essie Mae’s adulthood. Although later in life family members would say these payments were “shush” money, Essie Mae came to believe that the money was expressions of his love for her and her mother—although it always hurt that he never publically acknowledged her as his daughter.

It didn’t occur to me to apply to a program for one of the great university hospitals….though I might have been qualified to get in. I guess I “knew my place,” my white father notwithstanding. There were talented blacks at all these institutions, but I was too locked into the self-perception of race limitation to try to test the color lines. I was shy and self-effacing and had never been away from home…Penetrating the white universe was far too intimidating a prospect. If my own white father didn’t want me, why would anyone else? (p. 74-5)

This looks like an absolutely fascinating read. I will certainly put it on my TBR list. Thanks for telling me about it.

Thanks to this good review I'm putting this on my "must read" list. I'm sure it is great background reading for your WIP, too.

Thanks for such a good review of a book that goes so much to the heart of the conflicts in our country, past and present. What a difficult question to live with all her life. I certainly want to read the whole bok.

Thanks, Friends. Glad that this book is interesting to all of you. More coming next week!

This does sound like a fascinating memoir. Thanks for the review!