Congratulations to Linda Andersen who won a copy of "Call Me Oklahoma!" on last week's blog.

Before I introduce this week's guest blogger, I want to tell you about a writer's service: Grammarly.com is just what the name says it is--an online plagiarism and grammar checker; and proofreader. I tried it out and was amazed to find the number of errors in one sample chapter. I think using Grammarly's Plagiarism check would keep me from hearing an editor say, "Hmmm...this sounds familiar..."  My worst nightmare! 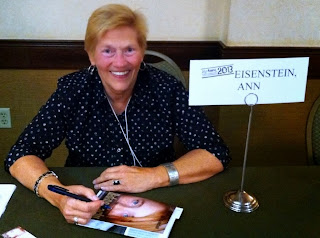 "I am dedicated, determined and desirous to empower, enable, and encourage children."  Ann Eisenstein

Ann is a psychologist, consultant and teacher; she has been trained by the FBI Citizen's Academy, is a recent graduate of the Richland County Sheriff's Citizen Academy, and a presenter for NAMI. After retiring, she decided to take a stab at writing. At the time she was mentoring a young fifth grade boy who she calls "G".

Ann says, "G’s class was in the FBI Junior Special Agent Program. The main focus of this program is to help students improve their performance and their attendance in school.  Through his involvement in this program, I began to witness a change in G’s behavior. He became more involved in school, his work, and our relationship. He also became more outgoing with his peers. I was so proud of him!

"A germ.  A seed. A nugget. Planted. It took root, and inspired, I decided it was time to start writing. I chose an main character, Jamie, and titled the book Badge Boy. I stared at the page – it was pretty blank.

"But I had an idea: I called the Special Agent in charge of G’s JSA program, told him I was writing a book and asked if I could interview him. Surprisingly, he agreed. I was on my way to the FBI. Gates, guns and grit."

In this way Ann combined her love for writing and all things detective!

Following Hiding Carly, her first book in the Sean Gray Junior Special Agent series, Ann's second book Fallen Prey was released this fall from Peak City Publishing. Here is the blurb:
Twelve-year-old Junior Special Agent Sean Gray is in a race against time. Could there be a connection between his testimony in the trial of an international child kidnapping ring and his mysterious accident?
While the sheriff’s department and the FBI are investigating, his new friend, Gabby, gets caught in the web of an online predator and disappears. She’s been missing for more than 48 hours, and the authorities have not been able to find her.
Sean goes undercover to bait the mysterious hunter. But when he becomes the prey, how will he rescue her? 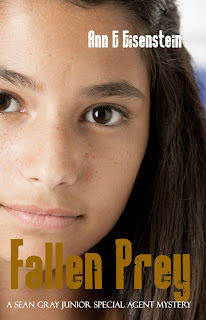 Oh, my. This sounds like a terrific book. This is definitely going near the top of my TBR list. I posted your link on Facebook. Thanks for telling me about this one.

Thanks for introducing us to Ann and her fascinating story behind her stories. I look forward to hosting her next week on my blog!

Thanks Linda and Rosi. Your names are in the hat!

Carol,
What fun, another stop on Ann Eisenstein's blog tour. Great post! I'd love to read Ann's latest book, but I'm asking not to be included in the drawing. After all, I just won, "Call Me Oklahoma!" Thanks so much for another great giveaway.

Thanks, Linda. For stopping by!

That sounds exciting! Thanks for sharing a great book and a fun story of how it came to be!

Thanks Beth, you're in!

Dear Carol, thanks for finding neat giveaways for your blog. Ann eisenstein is an outstanding author!

Thanks Donna and Joan. You're in!