The Other Half of My Heart: An Interview and a Giveaway!

In my last blog I reviewed Sundee Frazier's contemporary novel, The Other Half of My Heart. Now Sundee shares the story behind the story, and a chance to win a personally autographed copy.

Carol: I'm curious as to why you chose to write your book from Minni's point of view.

Sundee. I know this point of view best. As a biracial African-American with light skin, I have often been labeled “white” like Minni. I “get” what it feels like to blend in with and be accepted by whites, and yet have this deep, abiding sense of being psychically and emotionally connected with black people. Over the years I learned, like Minni, that I could align myself with my darker sisters, use my voice to speak the truth, and have a beautiful heart, no matter what my color. Telling the story from Minni’s point of view required less effort, in that it’s substantially my point of view, but also required more transparency and emotional vulnerability.

Carol: Did you consider telling the story from both girls POVs?

Sundee: Not while I was writing it. After the fact, I received feedback that some readers would have liked to hear Keira’s perspective.

Carol: I think you did an excellent job of showing your readers what Keira thought and felt through her words and actions. How did your own growing up years influence writing this book? Did any of your experiences make it into the book?

Sundee: I’m glad you asked this, because while Minni and I have similar racial experiences, Keira is certainly a part of me, too! I enjoyed performing as a kid, like Keira (although I can also be shy and performance-averse like Minni), and experienced my share of “achievement programs” as a teen. (See my website for pictures of me wearing ridiculous pageant gowns and outfits—or maybe don’t!) In terms of racism, as a young person I was only a direct target of racist comments a few times. I’ve never been followed in a store or asked not to handle goods, as Keira. I know that in our society’s messed-up paradigm of race, I’ve been afforded a certain protection by the lightness of my skin. But I also know that being African-American has sensitized me to racism and that’s why I write about it: because I know it’s real.

My black grandmother’s experience directly influenced Grandmother Johnson’s character, particularly the pain Grandmother Johnson carries related to skin color. My grandmother was essentially raised by her grandmother. (Her mother was a domestic worker who traveled with the white families she served.) This woman (my great-great-grandmother) was the daughter of a slave and a master, and had very light skin. My grandma told me about visiting the South with her grandmother, and how shocked she was when they had to go to the back of the bus. (In the Northwest, where she was born and raised, there wasn’t legal Jim Crow, although there was still plenty of prejudice and socially enforced segregation.) This anecdote inspired the story that Grandmother Johnson tells about her white-looking grandma taking her on a bus. I never experienced my grandmother as someone with internalized racism—to me, she was extremely proud of her ethnicity, and passed that along to me.

Carol: Can you share some of the backstory about writing this book, getting an agent, and getting a publisher?

Sundee: I am fortunate to be represented by the inimitable Regina Brooks of Serendipity Literary Agency. My final advisor in the Vermont College of Fine Arts MFA program, Carolyn Coman, introduced me to Regina after I graduated and she has been a force on my behalf. When Regina sold my first novel, Brendan Buckley’s Universe and Everything in It, which also happened to be my MFA creative thesis, to Delacorte Press (Random House), she garnered a two-book contract, although I didn’t yet have a second book written! When it was time for the second book, I pitched an idea that I’d hatched and drafted during NaNoWriMo. My editor rejected that manuscript, but then told me about a news item she’d seen out of the UK about twins who’d been born to a multiracial couple: One looked black and the other white. She pondered aloud, “I wonder what their lives will be like when they’re 12.” Then she asked, “Do you think you could write a story about that?” Eager to please, I responded with, “Uh . . . sure!”

I always believed I was uniquely poised to write such a story, but I have to say, it was an extremely challenging process getting from beginning to end. I had the pressure of a contract for a book I hadn’t written, and subject matter that I cared about passionately and wanted to get just right.

Carol: It’s great hearing how your book evolved, Sundee. That gives me hope for my own WIP! It’s also interesting to discover how much your own life experience informed your writing; you were definitely in a unique position to write it.
*********
Sundee is giving away a personally autographed copy of her book to one fortunate reader! Here is how you can win it: 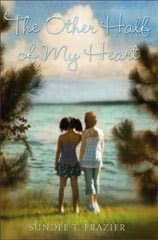 1. Leave me a comment with your email address, if I don't have it. For every time you share this post on a social media site, I'll enter your name an additional time. Make sure you tell me what you did!
2. If you are a new follower to this blog, I'll enter your name another time.
3. Winner will be drawn on Friday, February 21--so enter soon!
at February 18, 2014

Email ThisBlogThis!Share to TwitterShare to FacebookShare to Pinterest
Labels: contemporary fiction, getting an agent, giveaway, middle grade book for girls, multi-racial, Sundee Frazer, The Other Half of My Heart, writing and revising

I've already read this book so no need to enter me in the drawing, but did want to let the author know how much I enjoyed reading her book and learning the story behind it.

Thanks, Shannon. Sweet of you to stop by. I'm sure Sundee will appreciate hearing that.

Thanks, Jennifer, for stopping by. You're first on the giveaway list!

Carol, I am eager to read this book. Thank you for inviting Sundee Frazier to share her "story behind the story." It is very interesting and it reminds me of a great book you recommended some time last year titled "Dear Senator."

I am really looking forward to reading this book. It sounds terrific. I Tweeted and posted your link on Facebook .

It's so cool that Sundee's editor would suggest a topic and Sundee would dig in. I appreciate hearing about the 600 pages--I'm lazy about brainstorming/freewriting exercises. Would love to read the book!

Apparently I missed the post with the review. I'm going to go find that now.

Thank you, Sundee for sharing your story here and for writing what you know. I'm eager to read this.

Great interview, Carol. Loved hearing about the evolution of the novel, Sundee. I tweeted about the giveaway!

Thanks friends for sharing this post on FB and Twitter. I've entered all of your names accordingly.

I loved the interview,Sundee. Thanks so much for sharing your experiences and writing such a wonderful book. It does show how much our life experiences reflect in our writing.
I'd like to know what other books you have written.

Dear Carol and Sundee,
Thanks for sharing about how some of you get into your book The Other Half of My Heart.

Good luck to both of you in your writing endeavors.

Thanks, Sheri and Joan!

What a great interview. I have been wanting to read The Other Half of My Heart! Now I must!

Yes you should, Ann. Just added your name to the giveaway list.