Rose Under Fire: A Review and a Giveaway!

I wish this book didn't exist. 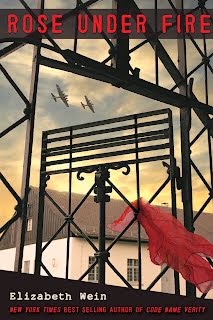 What I mean is that I wish Rose Under Fire, a brutally honest book about a young American pilot imprisoned in the Ravensbrück concentration camp, didn't demand to be written.

But unfortunately, it did.

Rose Moyer Justice is an 18-year-old American Air Transport Auxiliary pilot ferrying planes for the British government. Although World War II is drawing to a close, during a semi-secret flight she is captured by the Germans. For six long and painful months, Rose is incarcerated with thousands of other female political prisoners and seventy-four Polish victims of Nazi human experimentation who are nicknamed "The Rabbits."
Wein holds nothing back from showing Rose's physical, emotional, and mental struggles in the concentration camp. Her descriptions are full of such convincing detail that I felt guilty eating a granola bar while listening to it; the characters' starvation and deprivation had become so real to me. Similarly, when I listened to Rose's beautiful poetry sprinkled throughout the story I had to remind myself that Elizabeth Wein had penned these words. In the same way in which her fellow prisoners clung to her poetry, desperate for beauty in the midst of a world of despair, I felt as if the poems were gifts from Rose herself.

Six million Jews dying in concentration camps is a number difficult to comprehend  But like seeing thousands of shoes at the United States Holocaust Museum in Washington, D.C., I'll remember individual stories because Wein used amazing characterization and deep point of view to show each one.


In the concentration camp Rose becomes a part of a "family;" a small group of prisoners bonded together by their desperate hope to survive. Lisette Romilly is nicknamed the "lagermutter" and acts as the mother to the group. A French musician, professor, and novelist, her character is based on Irène Némirovsky who was killed in Auschwitz. Lisette is arrested after her Jewish Polish husband is killed and she attempts to return to France. Rose realizes that Lisette deals with the loss of her sons and husband by mothering her small prison flock. Lisette moderates sibling-like squabbles in her family and fiercely protects and provides for them--by getting small scraps of bread, obtaining contraband medicine, and finding places for the rabbits to hide.

Róża Czajkowska is fourteen when Lisette meets her. A fierce Polish member of the Gray Banks, an underground paramilitary association. she was arrested delivering explosives to the underground. Lisette begins mothering her when they are imprisoned together in the Lublin castle. When they reach Ravensbrück, Róża is one of the first to be operated on. This is from the mock interview with Lisette:

"The theory was that the camp doctors would simulate battle wounds on their legs to find cures for German soldiers injured on the Eastern front. My companions had muscle, nerve and bone cut from their legs, or had gangrene cultured in purpose-made wounds in their healthy flesh. Several of our transport died after the first round of experiments in the autumn of 1942."

Lisette's mission is to get Róża out of Germany so the world will see the atrocities performed there. Rose and Róża are joined by their shared name, Rose's poetry, and the challenge to "tell the world." 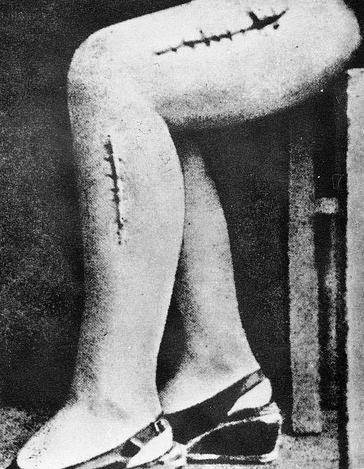 The audiobook was narrated by Sasha Pick who does an outstanding job of portraying a variety of foreign accents. Without question, her excellent narration drew me further into the story.

I rarely give a five star rating to any book on Goodreads. But this winner of the 2014 Schenider Family Book Award is at least a six in my book. Wein's commitment to historical accuracy combined with a well-plotted story using beautiful language makes this a book I will remember for a long time. In my first email to Elizabeth I confessed I had a hard time saying I enjoyed her book because it was painfully wonderful. She wrote back, "Funny you should say 'enjoying' might not be the best word - when it first came out I'd say to people, "I hope you enjoy it - well, you won't enjoy it, but I hope you appreciate it!" THANK YOU for appreciating it. When I was writing Rose, my Jewish aunt and uncle (my father was Jewish) pointed out to me that if our grandparents hadn't left Europe in the early 20th century, we'd all be dead including my children. It's unbelievable how far-reaching that shadow is. We are the lucky ones."


Roza and her fellow prisoners urge Rose to "Tell the world!" In Rose Under Fire Wein has accomplished exactly that.

Scroll through Elizabeth Wein's website and you'll find many materials which will facilitate classroom discussion. If you want to picture what life was like for Rose, view this You Tube video by chronoshistory:

To win an autographed hard copy of the Canadian edition of this book, please leave me your name (and email address if you are new to this blog) by Thursday, February 20th. Share this on your favorite social media or follow my blog, and I'll put your name in twice; just let me know what you did.

This time period in human history is so horrific but it is one that we MUST NEVER forget. As painful as they are to read, they MUST BE written and they MUST BE read. Thank you for featuring this book
I follow your blog and I am sharing on Twitter
Connie
cps1950 at gmail dot com

Carol,
I would like to be included in this drawing. This is a book that has a story that needs to be told. Thanks for such a great review!

In spite of the fact that I don't really feel like having my heart broken right now, I would like to read this book. So please enter me, Carol! Thanks so much for your insights into the book and to Elizabeth for sharing this history.

I just shared on FB. This sounds like a powerful book. Thanks for the in-depth review, Carol.

I love this book. Even better than Code Name Verity. Please don't enter my name in the hat. I just wanted to thank you for the wonderful review.

I think this is one of the best books I've read in years. Thanks for reminding me how terrific it was. No need to enter me in the drawing. Someone who hasn't read this should have it, although a signed copy is pretty tempting!

Thanks everyone, for leaving me comments. As you can see, I loved this book and agree, Rosi, that it's one of the best I've read in years. I've entered everyone who has wanted to be a part of this giveaway. Thanks!

Rose Under Fire is one of the best books I've read about World War II. While writing historical YA about a painful time in US history, Elizabeth Wein was and is my inspiration. Your review beautifully conveys the wonderful strengths and unique insights of this novel. I'm sharing your review on FB. Thanks!

I would love to add this book to my collection, Carol. I, too, don't want the atrocities of this horrible era to be forgotten.

Please do enter me in the drawing.

Thanks Jean and Susan. Your names are "in the hat" twice. Susan, please leave me your email address too in case you win!

This sounds like an incredible read. Kudos to Elizabeth for writing something so powerful and authentic that you want to give it five stars, Carol!

Thanks, Kim. Your name went in just before the drawing today!

HI Carol. I always enjoy your post and read even after you move onto another. I have been involved in a first pages workshop. Rose Under Fire is an amazing story and yes, sadly one that needs to be told. We don't want people to ever forget what can happen if we don't stand up to cruelty, injustice and hatred. Thanks for sharing this!
Sheri

Thanks Sheri. I appreciate that you're a regular reader!