After reading Guardian, which I blogged about last week, I was curious about some of the choices Mr. Lester made while writing this thought-provoking book. I contacted him through Facebook and he graciously allowed me to post his answers here.

Carol: How did you decide to write this in the omniscient point-of-view? Or maybe it’s the narrator’s POV—I’m not sure. All I know is that it works incredibly well. As I struggle to write a book from two POV I wonder about the process you went through in writing this story. How did you determine that you would write it in such a way that you showed the thoughts, motivations, and fears of all the characters? You must have created intricate backstories for each, yet you convey them all in such simple sentences. 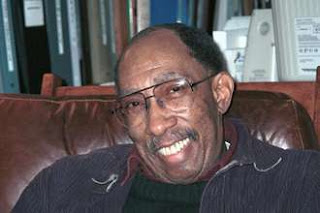 Julius Lester:
Point of view. That's always the question, isn't it? But you're right. In this instance it is the narrator's point of view. If I'd told it from the point of view of just one character, what the reader would have thought about the other characters would have been from the point of view of the one character. I wanted to be fair to all the characters. I wanted the reader to experience each character as she or he saw themselves. I didn't want to take sides against any of my characters. And that was how I conceived the book from the outset. While the characters were presented from their points-of-view, their actions lead the reader to decide if they're good or evil. But I, as narrator/author, do not present them as good or evil.

Interesting that you mention doing back stories for the characters. I didn't. I worked out a chronology of how old they were and when, since the novel moves back and forth in time, and I may have made some notes about their physical appearances, but I tend to carry the back stories in my head, which is not something I recommend. It would be to my benefit to write down the back stories, but that takes time I'd rather spend working directly on the novel.

I'm pleased that you like the novel. Many years ago I wrote a piece for the Sunday Times Book Review in which I mentioned that I wished a white writer would write about a lynching from the point of view of the lynchers. None ever did, so I did. I may have mentioned this in the Afterword. Of course, the lynching in the novel is tame compared to many actual lynchings that took place. I could have made the novel unreadable if I had stayed just with the facts. It's ironic that people would find it revolting to read what black people actually suffered. Seems to me that the least we could do is read about it. But the book would not have been published.

For your information, I gave Guardian to a black editor first. She wouldn't even present it to the publishing editorial board because she knew they'd turn it down. What disappointed me was that she wouldn't even fight for it. But, interestingly, the next editor who read it and accepted it was of Asian descent.

For more information about Mr. Lester, see this interview. My review of Incognegro portrays another view of lynching. The art exhibit Without Sanctuary is a chilling exhibition of postcards about lynching in the United States.

Guardian's "Author's Note" includes statistics on lynching (plus an interesting note about the etymology of the word); how that threat lived in Mr. Lester's consciousness as a young boy; how he was impacted by Emmett Till's brutal murder; and the history of how he came to write and publish Guardian (Harper Collins, 2008).

Here is a line from a letter Mr. Lester wrote to George Woods, the children's book editor in the New York Times Book Review in 1970: "White writers are so dishonest. Seldom have they written what they could have and should have, which is the white side of racism. I'd like to see a children's novel about a little white boy who goes with his father to a lynching." (p. 125)

Lester goes on to say, "While the subject matter is a lynching, on a deeper level, this is a novel about identity. Whom and what we identify ourselves with determines our characters, determines who we are, and what we do. Whose opinion matters to you the most? When you know that, when you know whom it is you most care about pleasing, you know who are. We make choices every day that shape the content of our characters." (p. 127)

Thanks for this interview, Carol. Very informative to learn about Mr. Lester's writing process, and the content of such a powerful story.

Can you imagine being able to keep backstory in your head, Carol or others? Not me! Thanks for sharing this interview with us, Carol. What a pleasure!

I know, LInda. I could never do that. You need to read this book to fully appreciate what a feat this was!

Wow, I have never heard of Julius Lester or any of his books. He's got my interest for sure. Thanks, Carol!

Glad to introduce you and your family to a new author. You'll be impressed with his writing.

Thanks for introducing us to Author Julius Lester. I'm also a writer who keeps the backstory of characters in my head. I definitely need to check out this book.

Good for you, Clara. I can't do that at all!

Thanks, Rosi. I hope you get a chance to read this book. Short and powerful.

Wow Carol! I must get this book. I love Julius Lester's autobiography and his picture book about John Henry. He is one of my heroes. Bravo for contacting him.

You'll be glad you did, Caroline. Facebook makes contacting authors so easy!

Carol, such an interesting post. I am in awe of Mr. Lester's writing method. I could never keep all that in my head! I'm glad he perservered so GUARDIAN would be published. I will be adding GUARDIAN to my reading list.

Thanks, Kathleen. It's a short read, but powerful.