Of Better Blood: A Review and TWO Giveaways

Last April I reviewed Susan Moger's book, Teaching the Diary of Anne Frank. When she contacted me and asked if I would read and review her debut novel, OF BETTER BLOOD (Albert Whitman and Co. 2016), I agreed. After reading it I can tell you one thing for sure: Susan used all of her research about Hitler and the events leading up to World War II in order to write this young adult historical novel.


Teenage polio survivor Rowan Collier is caught in the crossfire of a secret war against “the unfit.” It’s 1922, and eugenics—the movement dedicated to racial purity and good breeding—has taken hold in America. State laws allow institutions to sterilize minorities, the “feeble-minded,” and the poor, while local eugenics councils set up exhibits at county fairs with “fitter family” contests and propaganda. - Albert Whitman and Co. 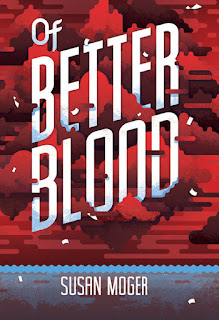 Four times a day I drop the baby.

It's not a real baby, but for a stunned heartbeat the audience believes it is. That's enough to get some of them on their feet, screaming, Stupid, clumsy, gimp. The words slide into my skin and stay there.

When I ask Mr. Ogilvie, the director, if just once I can catch the baby before it hits the stage, he frowns and puts his hands on my shoulders. I squirm away, but he holds on. "I love your sensitivity, Ruthie," he says, showing corn-yellow teeth. "But sadly a cripple like you can't be a hero."  (p. 1)

Thus the reader is thrust into the life of Rowan Collier, an unwilling actress in a "fitter family" drama reenacted four times a day at the Springfield, Massachusetts county fair. In the beginning of the novel Moger uses alternating chapters to show Rowan's life before this humiliating summer. In these flashbacks the reader meets her father, an engineering consultant for the Navy, and an advocate for the Betterment fight. He and Rowan's older sister, Julia, are dedicated to the proposition that society is best advanced having the fittest people marry and produce large families. The unfit, those who are physically, emotionally, or intellectually substandard, should be eliminated from society.

In one of these flashbacks Rowan recalls how one of her doctors wanted her to be sterilized.  Rowan refuses but is shaken afterwards:


Father believed, as Dr. Pynchon did, that a weakness inherited from Mother caused me to get polio. But would he want me to be sterilized? (p. 51)

Rowan's world--already dramatically changed due to polio--continues to fall apart when she is forced to do "educational work" for the New England Betterment Council at the Expo. There she develops a friendship with a fellow worker, orphaned Dorchy, whose parents worked county fairs. In these simple explanation to Rowan, Dorchy shares one of the underlying themes of the book:


Rubes are ignoramuses; carnies know everything. Rubes come to the fair with their eyes starry and their pockets full; carnies take them for what they're worth.....
Your Unfit Family Show does the same thing. You trick rubes into paying money under false pretenses. (p. 33)

As Rowan hears the stories of her fellow "actors" and how they were tricked into being sterilized, Rowan starts questioning what she had believed to be true about her father. Dorchy is a major catalyst in Rowan's increasing self-awareness.


When I left Bellevue and went to the Home, all thoughts of Dr. Friedlander and nursing school were driven out of my head by the effort of surviving. But here at the Expo, the memories are starting to come back. Dorchy is bringing me back to life. (p.64)


Following a dramatic escape from the Expo, Dorchy forces Rowan to question her assumption that her mother's bloodline was weaker since she died giving birth to Rowan:


Dorchy jumps up. "Listen to yourself," she shouts, angrier than I have ever seen her. "How can you sit there and say that about your own mother? After weeks with the awful Ogilvies and the Council cows you still don't question that 'better blood' garbage? she punches her fist against her palm. "You still think people are fit or unfit because of their family bloodlines? You know as well as I do that Gar and Jimmy and Minne are as fit as you and your precious father. (p. 117)

Despite Dorchy's misgivings, she considers working at the Camp for Unfortunates in Maine with Rowan.


"I'll bet you anything the camp is a con," she says stubbornly. "Miss Latigue is the carney; you and me the unfortunates are the rubes. You'll see." (p. 136)

Sadly, Dorchy's predictions prove to be true. I don't want to spoil the rest of the book, but the girls' lives become painfully difficult when they realize the camp is a facade for weeding out the "unfit."

Although the ending is triumphant as Rowan begins her journey towards nursing school, it is not without great personal loss. But she has matured from a dependent "cripple" to a young woman who has purpose, resolve, and determination.
This is not an easy book to read. But as Susan Moger relates in her Notes, "Eugenics was a popular pseudo-science in the United States from the early 1900's to the late 1930s. The double aim of eugenics was (1) to keep Americans with a "strong" heredity (family backgound) having children and (2) to prevent those with a "weak heredity" from having children....The popular method of preventing reproduction among the unfit was to sterilize men and women." Necessary Lies, which I previously reviewed has a similar theme.

As you may know, American eugenics principles were adopted in other countries, most notably Germany before and during WWII. Adolf Hitler praised American eugenics in his book, Mein Kampf and thus laid groundwork for a master race.

Although the Unfit Family show and the New England Betterment Council are fiction, "Fitter Families" exhibits and contests were a popular feature at state fairs starting in 1920. This book would be an excellent supplement in high school classrooms studying WWII.

********
If you are interested in winning my ARC, please leave me a comment by 6 PM on February 18. If you are new to my blog, please leave me your contact information. If you join my blog or share this on social media, please let me know what you do and I'll add your name twice. Susan also offered to giveaway an autographed copy of the hardback edition, so this time around I'll have TWO winners to announce next week! PLUS-- Susan is willing to send a book overseas, making this my first giveaway open outside the U.S.!

How can I NOT want to read this book after your amazing review. I was already moved and sickened and interested in the main character's feisty attitude and resolve and wanted to run right out and get the book, but I'll wait to see who wins the ARC.

Thanks for an amazing review.

Thanks, Sandra. You start the list! It is a pretty incredible book.

This book reminds me of John Railey's adult nonfiction book Rage to Redemption in the Sterilization Age: A Confrontation with American Genocide. It spotlights this issue in the state of North Carolina. Anyone interested in this subject would enjoy it, as well as "Of Better Blood." Thanks for the great review, Carol.

Wow! I had no idea this took place! You review such interesting books! Thanks, Carol

Hi Carol,
Thanks so much for your thoughtful, comprehensivce, thrilling review of my novel, OF BETTER BLOOD. I am retweeting and linking to it on my FB page. Good luck to all who enter the giveaway!

Thanks, Sheri and Linda. Susan just offered to giveaway an autographed copy, so now I'll get to pick two winners!

Wow, that's some storyline! I have a feeling it will haunt me...as transcendent books are wont to do.

Thanks for sharing OF BETTER BLOOD with us Carol.

It is definitely that kind of book, Melodye. Your name is in the hat!

Ah, eugenics, not one of the prouder moments in our history. Really interested in this one. Find me on twitter @gwenckatz.

I love the sound of this book! Your review sold it. :)

Best way to contact me is on twitter @luna_luminarium! And I'll happily RT the giveaway as well. :)

Thanks, Gwen. You're in!

Thanks, GV for your kind comments on my review. I work at these reviews and it's nice to see that pay off. You are in twice.

The book sounds fascinating, and I love the cover design!

Thanks, Barbara. You're in!

Carol,
This sounds like a difficult story to hear, but one that calls to me. I will post this on Facebook too. Winning would be awesome!

Your review of the book was mesmerizing, Carol. Eugenics philosophy and the underbelly of the time period were both horrifying and sickening; but stories like this one need to be told. Thanks for another great review. Wishing Susan Moger success with her new book, OF BETTER BLOOD.

Thanks you Clara and Linda. You're both in twice. And yes, this is a difficult book, but a story that is important to be heard.

Your reviews are always insightful! Thanks for sharing your opinions. They help us improve our writing.

You are welcome, JOan, and you're in the giveaway!

I will definitely put this one on my TBR list, but please don't enter me in the drawing. Still packing! Thanks for the post.

Your review sucked me right in. I totally would love to win a copy. I tweeted as well (@monnibo). I can be reached with that handle monnibo[AT]gmail

Thanks, Monica. You're in twice!

Thanks, Dorothy. You're in!

It is a another winner for my teacher, Susan Moger. The Anne Frank book is by far the best book about her life and I am glad it is read by school children lest they never forget. As far as her recent book "Of Better Blood" it is a topic that had to be written about. I worked in a psychiatric hospital in the late 50's and keep trying to forget. I hope libraries all over have this book on their shelves.

Thank you for your comment and entering this giveaway, Barb. How fortunate for you to be taught by Susan!

Thanks for stopping by, Elena. Sorry it's too late to enter you in the giveaway. But I think you'll appreciate this book.