Some of you may remember when I featured NC author, Constance Lombardo, and her debut graphic novel, Mr Puffball: Stunt Cat to the Stars. I'm happy to report that the sequel, Mr. Puffball: Stunt Cat Across America is being released on September 27 by Harper Collins. So, for all you Constance Lombardo fans, here's the scoop on Mr. P's next adventure!

Mr. Puffball has a problem. He's tired of suffering burns, bruises, frost-bite, and all manner of stunt-cat injuries to his pride and person.  He is itching to do more. So when his friend and mega-movie star El Gato wants Mr. P. to co-star in a buddy movie with him--he can't refuse.

Figuring that their movie will be his ticket to stardom, he is ready to start filming when El Gato informs him that they don't have the cash they need for a director, costumes, extras...well, just about everything. Turned down by the head honchos of Purramuont Studios in favor of Jude Claw and Benedict Cumbercat, Mr. P. decides to take the bull by the horns (or maybe the tiger by its tail?). He and El Gato will make a demo reel that outshines Cumbercat's and show Purramount who they should hire to star in Mac and Cheesy's Excellent Adventure. 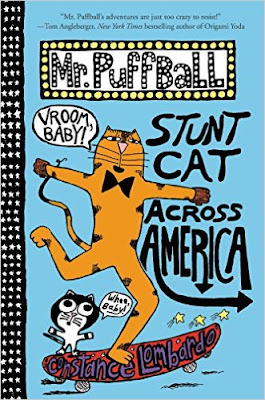 Mr. P. and El Gato, along with their friend Rosie as the director, set off across America on their Cross-Country Road Trip Demo Reel Adventure. 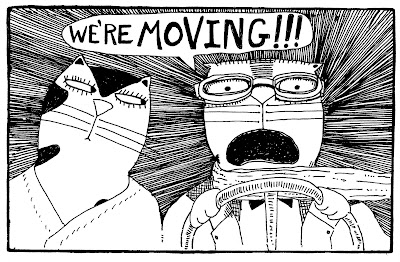 Even though Mr. P. wants to shed his stunt-cat identity, young readers will applaud his courage as he outwits hobos in Las Vegas,  jumps through fire at the Cirque de Soleil, and rescues Pickles, the adorable kitten who has joined them, from drowning in the Colorado River. In typical Mr. Puffball fashion, he doesn't always understand how courageous he's been until Rosie gets her footage and they're on the road to their next destination.
Constance brings all the characters to life through her animated drawings as well as through the voice of the characters. Besides Mr. P. himself, one of my favorites is Bruiser, the Russian stunt cat who trained Mr. P. Early in the story he flies into the hobo camp from a passing train exclaiming, "Looking out Below!" When he lands on his paws after a perfect flip he says, "Mr. Puffyball! How you here?" From that moment on, his voice is heard as he travels across America--often saving Mr. P. from disaster. 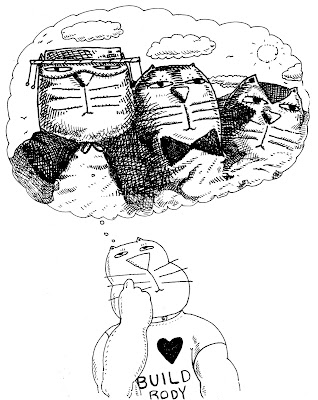 I don't want to spoil the story, so you'll have to get your own copy to read about all the crazy adventures the crew has on their way across America. 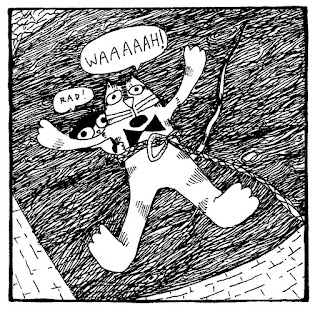 Constance and I are giving you two chances to win her latest Mr. Puffball creation. I have my autographed ARC to give away and she will send an autographed book to another winner. Leave me a comment by September 16 and I'll enter your name in this double giveaway.  Share on your social media of choice and/or become a new follower of my blog and I'll give you an extra chance to win; just make sure you leave me your email address and tell me what you did. This book will definitely entertain the 3-7th grade reader in your life.

PLUS: If you live near Asheville, NC, Constance's book launch is at Malaprop's Bookstore on October 8.

In case you're new to Mr. Puffball's adventures, here is how it all began:

This sounds like a fun book for young readers. Thanks for the chance to win. I shared on Google+ and Twitter
Connie
cps1950(at)gmail(dot)com

Thanks, Connie. Your name is in twice to start this giveaway!

Sounds hilarious! Super, Constance! I will share your next book with my cat loving, grandson. He enjoyed the first!

Thanks, Sheri. You're in!

How can I resist a stunt cat?! Mr. Puffball sounds like a winner! I'm thinking that even my 12-year-old son (and cat lover) would enjoy Mr. Puffball's escapades. Glad to hear there will be a third! It's way too early for Mr. Puffball to become a "has been. " Cheers!

Thank you so much, Carol for featuring me on your blog!!!! I look forward to signing and sending out a copy of Mr. Puffball: Stunt Cat Across America to a lucky winner! Also, I never identified Bruiser as Russian... that's open to interpretation! (and your guess is certainly a believable one!)

Oh, I'm pretty sure Bruiser is Russian...that's too funny, Constance. And Jillanne, glad to have your name in the giveaway!

As a serious cat lover and in the midst of socializing kittens (I feel part feline most of the time) I need this book in my life! Even the short excerpts made me laugh!!! Thank you for writing and illustrating this book Constance and I love there's going to be another Puffball book.

ps: Our previous kitten was named Savvy (after the book) but she was such a poofball, that's what we ended up calling her most of the time.

Thanks, Vijaya.You are in twice!

Thanks, Julie. I think it would be great in your classroom!! You're in twice.

This blog post was right on time. I'm trying to find books that may interest a friend's daughter and this series is perfect! I shared on FB and Twitter.

Thanks, Dorothy. I bet it would interest her! YOu're in twice.

Dear Carol, What a wonderful series by Constance. Carol, you are always sharing good books, authors, and illustrators with us. Thank you.

Thanks, Joan. I think your grandkids would like her books! You're in!

Thanks everybody for the sweet comments!! I love hearing from all the teachers, parents, librarians, readers and cat lovers!! Today I went into a 4th grade classroom to donate a book - lots of the kids have already read Mr. Puffball and are excited about Mr. P 2! I told them about the new kitten named Pickles, and one kid said his dog was named Pickles. Then another kid said she has a dog named Bruiser!

My granddaughter needs this book! Off to share it with the world! Congrats to Constance and thanks, Carol!

This book sounds like so much fun for readers of all ages! Congrats to CL. May Mr. Puffball live long and prosper!

Thanks, Ann, for stopping by. You're in!

Thanks, Clara, You're in too!

Thanks for the great article. I can't wait to read the book. Warm congratulations, Constance!

Thanks for stopping by, Jo. I'll add your name to the giveaway list!

These books look like a lot of fun. Thanks for the post. I will pass on the giveaway, though.

I laughed out loud reading this! Jude Claw and Benedict Cumbercat. Hilarious.

Thanks for your comment, Erica. I need your email address in case you win!

As an avid book lover and even more avid cat lover - I am anxious to read about Mr. Puffball's latest stunting adventures!

I loved Stunt Cat to the Stars... hope it's in my stars to win a copy of the sequel!
(Also, big congratulations to Constance!)

Thanks, Laura! I added your name to the growing giveaway list!

Thanks again, everybody!!! I appreciate all your good wishes and kind comments!!

Happy to host you and Mr. P, Constance. IT was fun!

Sounds like the perfect story for the younger reader set. I'll be sure to look for it in the stores, Constance. Good luck and the enjoy the rest of Mr. Puffball's lives.
Good review, Carol. Sarah

Thanks, Sarah, for leaving a comment. Unfortunately, I chose a winner yesterday. But I'm sure Mr. P can find a home in your bookcase via Amazon or your independent book seller!

I'm so happy for Constance! Mr. Puffball, is shaping up to be a wonderful, funny series for young readers!! I'm in awe of her talent with doing her illustrations- I can't draw a straight line with a ruler. (I know I missed the drawing, but wanted to comment-I'm a tad behind in my blog reading). :)