Radioactive!: How Irène Curie and Lise Meitner Revolutionized Science and Changed the World-- A Review and a Giveaway

Congratulations to Connie Saunders who won my Mr. Puffball Stunt Cat Across America ARC and Linda Phillips who won the hardcover book. Thanks to all of you for entering. Lots more giveaways coming up, starting right here.

Radioactive! is one of those books that makes you wish you had listened better during high school chemistry and physics. But even if your high school days were a long time ago like mine were, Winifred Conkling has written the history of how artificial radioactivity was discovered in such an engaging and reader-friendly way, that the science is accessible.  Better yet, it made an unscientific person like myself want to understand concepts like nuclear fission and transuranic elements. And that says a lot!

Radioactive! is the story of how two largely unknown women- Irene Curie and Lise Meitner--worked independently on this important discovery. I selected this book from Recorded Books because Lillie, the African American protagonist in Half-Truths, wants to become a scientist.  Irene's and Lise's stories helped me gain insight into Lillie's motivation and her thoughts about science. 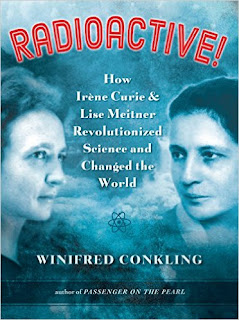 Conkling includes the backstory for both scientists. Irene, the daughter of famous Marie Curie who developed the theory of radioactivity, seems to have been born to be a scientist. She was educated along with other French children of notable academics, studied science at the Sorbonne, and her doctorate dissertation was on the alpha rays of polonium, the element her parents discovered (along with radium) that was named after Marie's country of origin, Poland.
Irene worked with her mother during WWI helping to set up and operate mobile x-ray units. Irene not only inherited her mother's passion for science, but also the conviction that women scientists should be treated equally with men. Like her mother, she received a Noble prize in Chemistry (Marie also received one for Physics). But unfortunately,  Irene's death--like her mother's--was a result of working closely with radioactive materials.


In 1934 the Joliot-Curies finally made the discovery that sealed their place in scientific history. Building on the work of Marie and Pierre Curie, who had isolated naturally-occurring radioactive elements, the Joliot-Curies realized the alchemist’s dream of turning one element into another: creating radioactive nitrogen from boron, radioactive isotopes of phosphorus from aluminum, and silicon from magnesium. .....

Irène’s group pioneered research into radium nuclei that led a separate group of German physicists, led by Otto Hahn, Lise Meitner, and Fritz Strassman, to discover nuclear fission: the splitting of the nucleus itself, emitting vast amounts of energy. https://en.wikipedia.org/wiki/Irène_Joliot-Curie.

As a child growing up in Austria, Lise Meitner kept a notebook under her pillow of things she was enthralled with such as the colors of oil slicks and reflected light. As a grown woman, she was not allowed to attend a public institution of higher learning so she studied physics privately. Since she enjoyed both mathematics and physics, she attended lectures on both subjects and was the second woman in Austria to receive a doctorate degree in physics. Born of Jewish parents, she converted to Christianity as an adult.


In 1912 the research group Hahn–Meitner moved to the newly founded Kaiser-Wilhelm-Institute (KWI) in Berlin-Dahlem, south west in Berlin. She worked without salary as a "guest" in Hahn's department of Radiochemistry. It was not until 1913, at 35 years old and following an offer to go to Prague as associate professor, that she got a permanent position at KWI.

In 1917, she and Hahn discovered the first long-lived isotope of the element protactinium, for which she was awarded the Leibniz Medal by the Berlin Academy of Sciences. That year, Meitner was given her own physics section at the Kaiser Wilhelm Institute for Chemistry.[11]


In 1926, Meitner became the first woman in Germany to assume a post of full professor in physics, at the University of Berlin. In 1935, as head of the physics department of the Kaiser Wilhelm Institute for Chemistry in Berlin-Dahlem (today "Hahn-Meitner-Building of the Free University) she and Otto Hahn, the director of the KWI, undertook the so called "transuranium research" program. This program eventually led to the unexpected discovery of the nuclear fission of heavy nuclei in December 1938, half a year after she had left Berlin. She was praised by Albert Einstein as the "German Marie Curie".[11][22][23]

World War II divided countries and scientists. Even though protected for a time by her Austrian citizenship, when the Nazis found out she had Jewish parents, she was forced to flee Germany. Exiled in the Netherlands and then in Sweden, Meitner continued her research--although without her precious laboratory equipment.

I admit that the science behind their discoveries is incredible. But what interested me was how the war changed everything for Meitner and Curie. Suddenly, the research they had done to harness the huge power within the atom, was taken out of their hands and used to create the atomic bomb. Both woman wanted nucleaer energy to be used in peaceful ways. Neither anticipated an application for warfare and both felt guilty after hearing of the destruction in Hiroshima.

Although I quoted Wikipedia above, I can assure you that Winifred Conkling did an amazing amount of original research before writing Radioactive! and that is apparent when reading or listening to this book. Readers will be fascinated by the interplay of science, history, and political intrigue.

I am giving away my copy of this audio CD in conjunction with the fall issue of Talking Story on Radiation: Friend or Foe. Leave me a comment by September 23 for one chance to win this excellent book that would be useful in a middle or high school classroom. Share this on social media or leave another comment through Talking Story and you'll be entered twice. Just make sure that you tell me what you have done and PLEASE leave your email address if you are new to this blog.
at September 19, 2016

Thanks for this informative brush up on science, and review of what sounds like a fascinating read. I can see how it would fit right into your research!

This sounds like an amazing book! I would love to win the audio CD. I am going to promote this giveaway on twitter.

Mary, Thank you for sharing this on twitter. Just for that, I'll put your name in twice!!

Sounds like a fascinating book. Glad to see that it helped with your own research. Cheers!

Thanks for this review. It sounds absolutely fascinating. Please let someone else win. I still have the last book I won here on my TBR pile.

Carol, thank you for reviewing RADIOACTIVE! I spend most of my time reading about the effects after the atomic bomb was dropped, so I find it fascinating to read about how these women, who separately pioneered research that lead to nuclear fission. I knew about Marie Curie, but not much about her daughter. Sadly, I did not know about Lise Meitner at all. It is especially interesting to me to know how their work was turned into a weapon, which neither of them had intended. Oh, what a find for you to use as a source to add more insight into Lillie's love of science in HALF TRUTHS!

Yes, I bet that was interesting to you Kathleen. Different perspective!

Fascinating, Carol! Knowing about your research makes your story even more tantalizing. Can't wait to see how you've incorporated this information. If you're not a writer, most readers have no idea how much research goes into a novel!
Thanks for sharing this book.

You are absolutely right, Sheri! Your in the giveaway. Your grandsons would like this book.

I love science and I've always been enthralled by Marie Curie. Thanks for sharing this book, Carol. Please let someone else win.

Fascinating! I worked with X-rays a lot in graduate school (x-raying solids, not people) and one of my professors used to tell us all the horror stories about back-in-the-day when no one really understood radiation. Thanks for giving this book some exposure! I'll tweet your link.

I never tire of this story! Talk about GRIT!!! Thanks for putting a spotlight on it.

Thanks Vijaya and michelle. You are both in!