STARTING OVER: A Review, ARC GIVEAWAY, and Interview 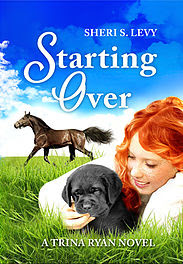 Having said goodbye to her first dog, Sydney, Trina is determined to start over with a new puppy, despite the pain she’ll feel when she must turn him over to his forever owner. Colton proves to be a handful, occasionally showing his mischievous and playful side, but he is also cuddly and smart. As Trina and Colton bond, the reader learns the patience and painstaking care involved in training a service dog.

When a new girl, Morgan, comes to the barn where Trina works and takes riding lessons with Chancy, Trina is challenged by the girl’s stiff unfriendliness. In her characteristic helpful manner, she tells her friend Sarah that they can reach out to Morgan using similar tactics she's used as a puppy trainer:

"...what if we don't react to Morgan? I tried being nice when she met us in the woods. She got flustered. My other friends at school last year mentioned the same problems with their brothers or sisters. They say that refusing to respond makes them change their behavior or go away. It's kind of like how I train Colton." (p. 45)

Trina teaches Morgan how to make friends with Knight, Morgan’s beautiful yet stubborn horse, and in the process gives Morgan some insights into friendship. When Knight refuses to let Morgan put the bit into his mouth, Trina advises: "Well, I don't think he knows what you expect, yet. Just like you don't know what to expect from him. It takes time to know each other." (p. 61)

Trina’s acceptance, Knight's warming up to Morgan, plus Colton’s playfulness, pay off and eventually Morgan's tough exterior crumbles. She shares the problems she has with her parents and Trina lends a kind, empathetic ear.

An untimely accident leaves Trina on crutches. Forced to give up her dream of training Chancy to be a show horse, Trina has to re-evaluate her goals. Slowly, it dawns on her what she was meant to do. Her decision is one that provides a great ending to this book and nicely paves the way for the next book, For Keeps. 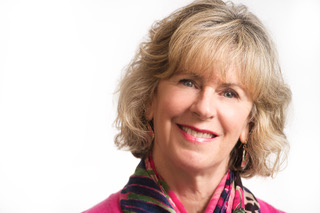 Sheri, Please tell us a little bit about your work with PAALS.

When Seven Days to Goodbye was published, I needed help with my website. By accident, I connected with the PAALS web designer, Sue Goetcheus. She has become my PR person, partner, and collaborator.

My first school visit was at her daughter’s school. Sue and I both spoke to the students about PAALS. Soon afterwards, schools with a PAALS spirit club invited me for school visits. If possible when I visit a school, a volunteer with a new puppy in training or a client with their own service dog demonstrate what a service dog does. The students love this interaction.

PAALS and I support each other. They call our connection, "PAALS touching lives through literacy." Most of the proceeds from my book events are donated to PAALS. They are 100% non-profit and their needs continue to grow.
I knew you were in love with dogs, but I didn’t know you had a similar passion for horses. Tell us how you got the idea for including horses in Starting Over.

I have never ridden! Our daughter, Trina, at an early age begged to ride. We ignored her request until one day she came home with a phone number on a torn piece of paper from a friend. The riding facility’s number was written in big numbers.

We told her she could take lessons, but not to expect getting her own horse. She worked at the barn to help defer the cost of lessons and used the barn’s schooling horse. She showed such an interest and a talent, we broke down and bought her a horse. Then we swallowed all of our other “Nevers”. We bought a large truck and a horse trailer. The horse boarded at a barn close to our home, with Mrs. Brown, and Trina worked long hours at the barn to help with the cost. She would have slept in the barn with her horse, if we’d let her!

It was fun adding horses to the story. But I needed Trina and Google to include the correct details on the horse characters.

Hoping for a series, I started working on Starting Over while I was submitting Seven Days to Goodbye. While I was in the revision stage with Barking Rain Press my publisher asked what I had next. I told her I had begun a sequel and had it named, Starting Over.  She surprised me by adding on the last page- Coming Soon From Sheri S Levy: Starting Over.

The sequel was fun to write because it followed the same characters I already knew. But it was scary not knowing if the story would be received as well as the first. I finally had to tell myself to just write and let the publisher decide if she’d publish it. I am fortunate to have an awesome editor who I work well with.

Can you give us a peak at book Three?

For Keeps uses the same characters with the addition of one new person. The novel begins in the same location as Starting Over, my former neighborhood in Greenville, S.C. And the story will end on Edisto Beach. If I say more, I will spoil Starting Over!
******
Now here’s Sheri's question to you, if you read Seven Days to Goodbye:

I’d love to hear from readers. Who would you like to see in the next story. And why?

For a chance to win this autographed ARC, please leave me a comment with your email address if you are new to my blog. Share this on social media (and tell me what you did) and I'll put your name in twice. Winner's name drawn on August 31.

I haven't read Seven Days to Goodbye but both of these books sound very good. Thanks for this giveaway.
I shared this on Twitter.
Connie
cps1950(at)gmail(dot)com

Thanks Connie, your name is in twice!

Thanks, Connie. If you enjoy dogs, the beach and teens challenges, this story has it all, plus humor, and a little romance. Purchase through Barkingrainpress.org and get a discount!

Thanks for letting us know about the discount, Sheri!

Thanks Carol for reading and adding such a nice review of Starting Over. Always enjoy reading your blog. Thanks for posting, since I don't have my computer! Be home tomorrow-

How exciting! Sheri, I remember when we met at the SCBWI conference years ago and your first book was close to publication. Congratulations on book number two!

Your name is in the hat, Dorothy! Thanks for your comment

Kids love animals and books in a series. All the best with book 2, Sheri!

Nice to hear from you, Cat. Your name is in the hat!

Dear Carol,
Thanks for sharing about Sheri's new book

Dear Sheri,
I am very happy for you and proud of your new book. Congratulations!

Thanks, Joan. Sorry that I can't enter your name--already chose a winner!