A is for Astronaut: A Picture Book Review and Author Interview

To celebrate the International Day of Human Space Flight, I am pleased to give you a peak into a new book by retired astronaut, Clayton Anderson (Sleeping Bear Press, May 2018). 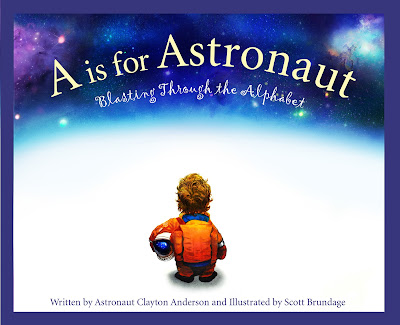 A is for Astronaut: Blasting Through the Alphabet, will appeal to readers of many ages. Like other books in Sleeping Bear's ABC list, each letter of the alphabet is anchored by a short poem for readers ages 5-8 and a longer exposition for 9-11 year-olds.

Illustrated by the talented Scott Brundage, each picture amplifies the text as in, B is for Blastoff.

Here is the poem for N which stands for...NASA. What else?

The world loves outer space; it's a grand destination,

And NASA's the group representing our nation.

The N stands for National, and it gives us such pride

when a rocket is launched with our flag on its side!


I liked the R page because of the accessible description of Rendezvous. Here's the second paragraph:

Consider the much-simplifed example of a football game where the coach has called for a pass play. In order for the pass play to be successful, the quarterback must throw the football (spaceship one) to the pass receiver (spaceship two) who will catch the ball. The quarterback throws the ball to where the receiver is going to be--not where he is at the instant he makes the throw. When the ball finally arrives and the receiver makes the catch, the play is a success! This is similar to the way spaceships will dock, or meet, in space.


“Astro Clay”–Astronaut Clayton Anderson's story is one of perseverance. He applied 15 times before NASA selected him as an astronaut in 1998; and he spent 30 years working for NASA, 15 as an engineer and 15 as an astronaut. He is the first and ONLY Astronaut selected from the State of Nebraska.

This STEAM book will be a great addition to any school or home library. Here's a brief interview about how this book came to life.

CAROL: What prompted you to write A Is For Astronaut?

CLAY: I was in Omaha, NE at the West Town Barnes and Noble, preparing for a book signing with my first book, The Ordinary Spaceman.  The store manager kept pulling me over to the nearby children’s section.  “You should write a children’s book,” she said.

Hesitant, I shrugged my shoulders and replied, “Yeah… maybe one day.”

She pointed out specific publishers, continually mentioning Sleeping Bear Press (SBP).  “They don’t have ‘A is for Astronaut’,” was her firm “suggestion.”  Shrugging my shoulders once again, and feigning only brief interest, I was overjoyed when the actual book signing began and turned my focus onto something I actually understood!

A few months later, during some idle time at home, I did a Google search on SBP.  It was then that I finally woke up and saw their tremendous success with their alphabet book series.  Electronically investigating “A is for Airplane,” and a couple other titles on their highly populated series list, I thought to myself, "I can do this!”

Immediately I began to formulate the words I would use for each letter of the alphabet.  A was easy… astronaut.  B followed suit with Blastoff.  I was cruising until I got to letters like F and K and I.  Some more research via the internet gave me all 26 letters and a corresponding space term.  Then came the poems. I actually finished the entire book in about 1.5 weeks!

CAROL: What was the most difficult part to write—the poems or the expository text? Why?

CLAY: The expository text was the most difficult for me, although difficult is a relative term.  The poems simply “flew” from my brain (do you like that space reference?!)  Writing them was a tremendously fun process. With the text however, a different challenge was presented.  I was seeking to entertain, educate, and inform, while at the same time creating interesting reading material that was technically correct and had the ability to “stretch” the young reader’s vocabulary.

Certain space concepts (e.g., rendezvous) forced me to dig a bit deeper as a writer.  Often speaking to young children in schools, I use visual demonstrations to communicate some of the more technical aspects of flying in space.  It became a simple matter of putting those demonstrations down on paper.  A second part of the challenge was technical accuracy.  I don’t claim to be an expert on “all things space.”  Heck, I’m just an astronaut.  Finding adequate reference material to ensure that what I wrote was valid and correct, required a bit more digging than I thought would be necessary.  In the end I think we succeeded masterfully, but I’m partial! 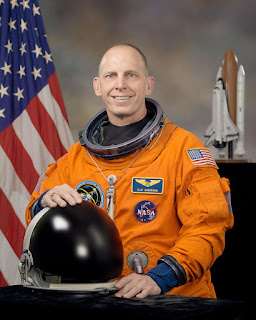 When speaking to kids and young adults around the nation, I constantly implore them to remember that “…they are just like me.”  They can be anything they chose to be.  It will take hard work, a lot of help, and a little bit of luck, but the future is theirs.  They must dare to make it extraordinary.

Check out this fun video starring Clayton Anderson--as himself!
at April 12, 2018

Loved the interview and the rockin' video. Great source for kids who love science.

Thanks, Debbie. It's a great book- I'm saving it for my grandkids!

Thanks all! I am SO glad folks are truly enjoying "A is for Astronaut!"

I know my grandkids will!

Yay! That's what we LOVE to hear!

I'll post their pictures with the book when I give it to them--probably next October when they both have their birthdays. It's perfect. My grandson will be in 2nd grade and my granddaughter will be in 6th Accessible to both!

This sounds so good! Thanks for sharing!

Connie, I bet as a librarian you're familiar with Sleeping Bear Press's great ABC books!

Thanks Sandra. Wonder if one of your grands would enjoy it?

Perfect plan! I'll look forward to seeing the pictures! Glad I could help!

Carol,
What a great interview! I have already shared it with two other people I know. Now for a posting on Facebook! What fun!

Thanks, Linda. I had fun writing this blog!

Looking forward to reading more of these ABC books! Thanks for filling me in. :)

You're welcome, Dorothy. They're terrific books!

Today I have two more lovely picture books courtesy of Sleeping Bear Press. If you're hankering to get a glimpse into Michigan or the Ro... 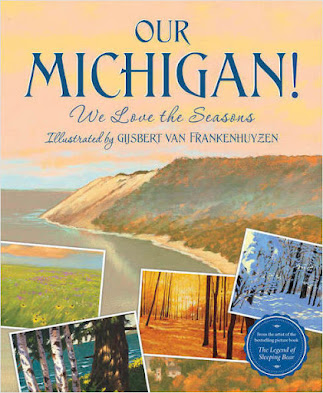