The Road to Bittersweet: An Audio Book Review and Giveaway

When I read in the Tantor Audio new release list that The Road To Bittersweet was set in North Carolina in the forties, I knew this was a book for me. This was my first book by Donna Everhart, but I suspect it won't be my last. Today's post is a review of the book that is based on the Flood of 1940 in Silva, NC. On June 18th and 25th I am posting a two-part interview with Donna that provides the backstory for this dramatic novel that both young adults and adults will enjoy. (Note: Since I reviewed this as an audio book, quotes might not be exact. I did my best to capture the words as I listened.) 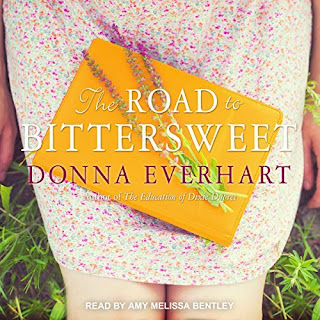 The book opens with Wallis Ann Stamper, the protagonist, turning fourteen and telling a birthing story. Not her own story, like the reader might expect, but rather the story of her older sister, Laci, "whose name alone conjures a frail and delicate bein'." Wallis Ann repeats what she's heard her mother tell: how when the granny woman delivered Laci she "come out the color of a ripened blueberry." Although Laci survived that difficult birth, she doesn't fit in with the harsh way of life in Western North Carolina, but "exists as a whisper you barely hear" or a "shadow on a partly cloudy day."

Mute from birth but gifted musically, the local doctor diagnoses Laci as an idiot savant; Laci hears a tune once and then plays it perfectly on the one thing that matters the most--her fiddle. (Today she would be diagnosed autistic savant.) Wallis Ann is given the responsibility of taking care of her sister; as a result Laci, tags along behind her older sister wherever Wallis Anne goes. Since the author spends so much time in the opening scenes showing Laci through Wallis Ann's eyes, the reader knows that Laci will be an important secondary character.

Wallis Ann's family including her little brother Seth, lives besides Stampers Creek. On the night of Wallis Ann's birthday, a monstrous storm hits their cabin. As the creek rises, Wallis Ann sees her father's face get tight, "smoothing out the normal crinkles and curves." With Laci clinging to her fiddle, they pack the truck cab "tight as ticks" and try to escape the rising waters. The fear in Wallis Ann's mouth "tastes like bitterness."

The creek, fed from the roaring waters of the Tuckaseigee River, becomes their enemy rather than a stream by which Wallis Ann and Laci had rested; Laci sitting on the Wishing Rock playing her fiddle, Wallis Ann thinking. In excruciating, tension-filled detail, the author shows as each family member is swept off the roof of the truck. "The muddy wall of water is like a charging, angry bull." As Wallis Ann fights the current, she sees dead animals and people floating downstream and wonders if it's selfish that she doesn't want her family to go under.


"As spent as a nickel in a dime store," Wallis Ann finds refuge by climbing a tree where she stays for several days. When it's finally safe to come down, she is exhausted, weak, and starving. She's worried about her family but "I refused to cry over what I didn't know."

On the road trying to get back to Stamper's Creek, Wallis Anne is met by Joe Calhoun and his son; Joe's wife was crushed by a pine tree that fell on their house. Wallis Ann smells his grief and misery, even as they lift the tree and rescue his little daughter.


When Wallis Ann returns to the property, there aren't even two chairs left from their home. The oak that her great-grandpa had planted as a sapling had fallen down. Nothing was left but the stone foundation which her father had built twenty years ago. "A part of my history had been taken away."

Like Cricket in Jo Hackl's debut middle-grade novel, Smack Dab in the Middle of Maybe," Wallis Ann listened to her father's stories about survival and is able to build a fire, boil water, and with the gifts of food from Joe, can sustain herself. When her family comes back together again they're convinced they've seen the worst--but unfortunately, that's not the case.

I risk giving away too many spoilers but Wallis Ann watches Laci become more unstable without her lost fiddle; her parents desperation trying to survive increasingly colder weather without shelter, food, or warm clothing; disease and death. As Wallis Anne observes, "All of us was collapsing like the barn."

Their "salvation" comes in an unlikely place. They leave Stamper's Creek to find work and shelter, and end up on the road singing in churches for enough food and gas money to keep them going. Wallis Ann meets Clayton, a high dive act in a carnival. When Clayton finds out the Stampers are a musical family, he convinces them to join the carnival--a further blow to Mama's pride.

This new period in Wallis Ann's life is rich with symbolism. After they perform she observes, "People stared at us like we were a side show of freaks rather than regular people." The carnival is full of freaks but when the carnival owner puts a sign up that advertises Laci as  "The Mountain Mute," Wallis Ann's father finally draws the line.  Wallis Ann and her mother are haunted by the question of who is normal and who are the freaks.

Laci's beauty and musical abilities attracts attention--even from Clayton who Wallis Ann crushes on--and she experiences annoyance over her sister's constant attachment. "How will anybody notice me with Laci beside me all the time?" And, "I'll never be able to separate from her and go after my own wishes."

Wallis Ann witnesses Laci and Clayton's love and her jealousy drives her to a response that she deeply regrets. This deep point of view shows how a well-developed secondary character can impact the protagonist and how motivations drive actions. "I wanted someone else to hurt as much as me."  When the couple disappears after Wallis Ann betrays them, she is consumed with guilt; she and her parents are overcome with grief. "Afterwards, we moved about the camp site like we was strangers. Like we’d each gone up a different mountain and stationed ourselves far apart."

After much trouble and sorrow, The Road to Bittersweet  has a satisfying ending. When the family returns home, Joe Calhoun's wise words help Wallis Anne find a way out from under her paralyzing guilt that "tugs at her soul like the Tuckaseigee."

Amy Melissa Bentley, the narrator, does an excellent job portraying both male and female voices. The perfect Appalachian North Carolina dialect lends authenticity to this period novel. Here's the snippet which opens the book.

Please leave me your name and email address if you would like to enter the giveaway for this audio CD. A winner will be chosen on June 28, following the two-part interview with Donna. Leave comments on each of those blog posts and I'll add your name for additional chances to win.

I've heard about this book before and you've made me want to read it. Thanks, Carol, for your excellent review.
Connie
cps1950(at)gmail(dot)com

I am having trouble receiving comments hope that this fixes it.

Thanks, Connie. I'll start the list with your name!

This sounds like a really intriguing story. I'll love to be in the drawing!

This story sounds fascinating & I enjoyed your review.
turtle6422(at)gmail(dot)com

Thanks both Lindas and Jana Leah. Your names are on the list!

Love the addition of the old pictures. They add so much to the post.

Thanks, Kathy. I had fun finding the pictures and matching them to the text. I added your name to the list.

is one really sounds terrific. I will put it on my TBR list. I'm not one for audio books, so please let someone else win. Thanks for telling be about this book though.

Carol, I love historical fiction, especially when set in regions I visited or want to learn about. I’ve been to Silva but did not know about its flood. What interesting plot twists in this tale! I am a huge audiobook fan girl...bet those mountain accents were awesome in the sound version. Looking forward to meeting the author in your next blogs.

Thanks, Cat. You will love this book. Happy to add your name to the giveaway list.