Congratulations to Jan Brent for winning the ARC of Jo Hackl's debut novel, SMACK DAB IN THE MIDDLE OF MAYBE. 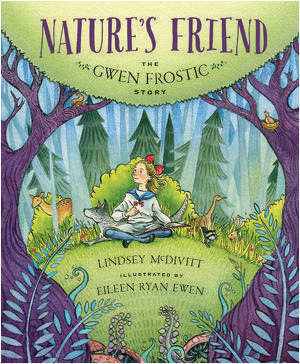 Like myself, you might not have heard of Gwen Frostic, a 20th century Michigan artist. Author Lindsey McDivitt and illustrator Eileen Ryan Ewen have produced a beautiful tribute to a woman who would not allow her physical disabilities to keep her from the art she loved (Sleeping Bear Press, 2018).

As a baby, Gwen contracted a disease similar to cerebral palsy. Although it left her with slurred speech and she frequently fell down, she worked her hands extra hard just to learn how to write. "She sketched and scribbled. She doodled and drew. Gwen's grip grew stronger and stronger." 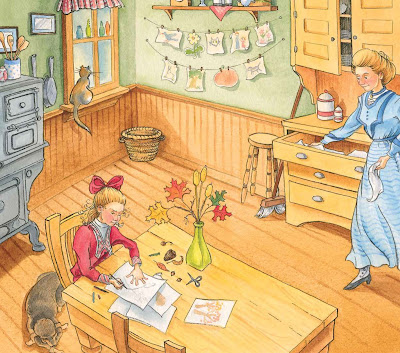 Throughout her childhood, "Nature felt like a friend, pulling her out to play." In high school she signed up for mechanical drawing--"learning to use rulers and compasses to draw machines--and the men squawked like angry blue jays."

In art school Gwen discovered how to make prints from blocks she carved out of linoleum. Eventually she launched Presscraft Papers stationary company which is still in business today. Drawn to the outdoors, she relocated to Lake Michigan's Betsie Bay so she could capture nature in her artwork.

Nature's Friend is a lovely tribute to a woman who once said, "Love this earth, love its waters...care enough to keep it clear." 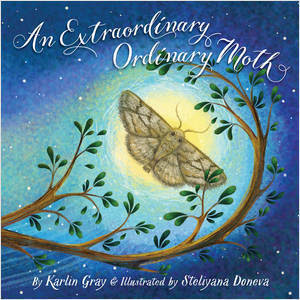 Although the moth feels like it's not as massive as an Atlas moth, as beautiful as a butterfly, or as graceful as a Luna Moth, a young boy is delighted when he finds it:

"A moth! A moth!"
a boy then screams.
He's running up to me.
I freeze and blend in with the wall.
Maybe he won't see.

But when his twinkling eyes shine bright...
his smile grows wide with pure delight...
His happy face is such a sight...
I move forward toward his joyful light. 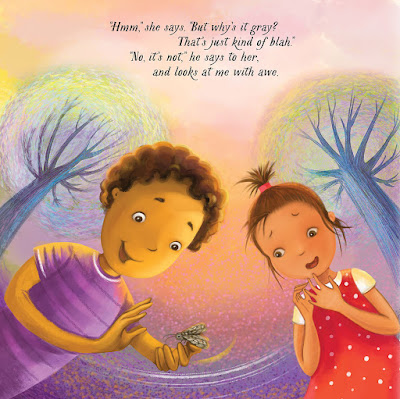 I enjoyed the moth's "metamorphoses" at the end -- not into another insect-- but rather into an appreciation of itself. This last poem reminds me of Miriam Franklin's debut novel, EXTRAORDINARY.

So how 'bout that?!
I'm someone's FAVORITE!
Little, grayish me--
proof of how
EXTRAORDINARY
Ordinary can be.

I am giving away these books, both excellent curriculum supplements with activities included, through the summer issue of Talking Story on "The Great Outdoors."  Leave me a comment here (including your preference) and I'll add your name to the list. Leave a comment through Talking Story and your name will go in twice. Don't forget to leave your email address if you are new to my blog. Giveaway ends July 23.

Since to my knowledge a book that I've featured has never been on a billboard before, I have to share this picture that I grabbed from Eileen Ryan Ewen's Facebook page! 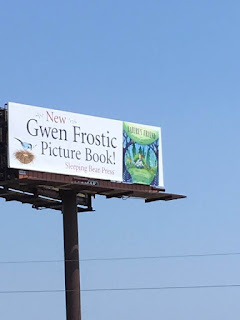 Both of these books sound perfect to share with my granddaughter and it is really hard to choose. She probably would enjoy An Extraordinary Ordinary Nurse. Thanks for this giveaway.
Blessings!
Connie
cps1950(at)gmail(dot)com

Lindsey McDivitt at A is for Aging said...

Carol, thank you so much for your lovely post! I’m honored to see Nature’s Friend paired with An Ordinary Extraordinary Moth.

A pleasure to host you, Lindsey. And Connie--I'll start the giveaway list with your name.

Thanks, Theresa. I'll add your name to both lists.

I love these illustrations and the books would be wonderful to share with children. Thank you for the chance! lindalou (at) cfl (dot) rr (dot) com
Linda

Both books sound wonderful, beautifully illustrated and important concepts to share with my grandchildren.
Thanks for the opportunity,
Jo Lynn Worden

Thank you LInda and Jo Lyn. Happy to add your names to the lists!

These both look beautiful. I would love to see the Gwen Frostic book in my granddaughter''s charter school. It is a charter for find and performing arts. The book sounds pretty inspirational for young artists. Thanks for the post and the chance.

Both books are unique and cute. I would love
An Extraordinary Ordinary Moth please.

Aww, thanks for mentioning my MG, EXTRAORDINARY in your blog post! It does sound like they have similar themes! Would love to win a copy so please enter my name in the drawing.
Miriam (for some reason it's using my daughter's email for Google Account so I don't know how this will post!)

Olga, please leave your email address in order to enter. And Miriam--I got you entered!

Carol, thanks for informing me of these new books. Both look great. If I should be lucky enough to win, I'd prefer The Extraordinary Ordinary Moth. Thank you! Jane Heitman Healy jheitman22 (at) hotmail(dot) com

Thanks, Jane. I'll add your name to the list.

Many thanks Carol and Joyce. Jan, I hope that you enjoy reading the book as much as I enjoyed writing it.

These books look & sound adorable. I know my nephew will enjoy them. Thanks for the giveaway!
turtle6422(at)gmail.com

Thanks for leaving a comment, Jane Leah. You squeaked in under the wire. Drawing a winner tomorrow morning!