Eyes on the Prize - Audio Book review and Giveaway

Congratulations to Megan Hoyt and Becky Scharnhorst who won copies of Viviane Elbee's book, Teach Your Giraffe to Ski. 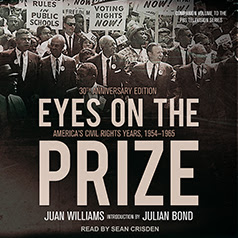 It's hard to review a book that covers the entire Civil Rights period in as much detail as Eyes On the Prize by Juan Williams does. The book, suitable for adults and young adults, is simultaneously comprehensive, academic, and personal. Williams wrote it as a companion to the first season of the NPR series with the same title. As noted below, several segments are now on YouTube.

Even though I have read many books on the civil rights era, William's book showed how one event led to another--like dominoes falling in succession. I recommended it to one of my experts, Vermelle Ely, who enjoys audio books. When we had talked previously my questions were about Charlotte and Second Ward High. When I asked her about Little Rock she said, "Sure we knew about it. But back then, news didn’t travel so fast." Her remark was historically revealing.

Although I have chosen different portions of the book to highlight, it is very difficult to summarize any of these historical events. For more detail--please read the book!


Charles Hamilton Houston served as a mentor to a generation of black lawyers leading up to the Civil Rights period. He was instrumental in attacking the "separate but equal" rules that governed the Jim Crow South. He investigated educational discrimination by creating movies of the schools for black children. Although he started with elementary schools, his goal was to develop graduate programs that were nonexistent for blacks. Houston was instrumental in pulling together the cases (including the historic challenge in Clarendon County, SC as I blogged about here) to create the lawsuit that eventually led to the Brown vs. Board of Education decision in 1954. Interestingly, Williams said that Emmit Till's murder did more for civil rights than Brown vs. the Board of Education as it brought the plight of southern blacks to national attention.

Since blacks frequently used buses for transportation to work, Williams noted that it was no accident that bus boycotts throughout the South became the stage of protest. "Indignity suffered alone was debilitating, but indignity shared was powerful."  Although blacks feared white reprisal for their boycotts (losing their jobs and physical violence) a growing sentiment was that the time had come to take a stand for freedom.

During this time Martin Luther King, Jr. preached nonviolence. Segregationists put pressure on white commissioners not to give in to black boycotts. The boycotts received national attention and
bus segregation started to be challenged in courts.

The behind the scenes politics in all the cities, but especially Little Rock, AK were fascinating.  Desegregation was a political football from the local level all the way up to President Eisenhower. The politicians, including Governor Faubus, were often more interested in grandstanding than fair play.

It was also interesting to track the role of the NAACP Youth Council as young adults and college students became involved in the movement. Williams features Diane Nash, John Lewis, and Jim Lawson who were leaders in nonviolent protests at lunch counters throughout the South. President Kennedy was deeply influenced by the student protests and became an important advocate of civil rights. An interesting segment at the end of the book details where these individuals were in 1987 when the book was published.


In this section I heard the sad story of Medgar Evars, a WWII veteran and civil rights activist who was murdered in 1963 by a Klansman. "All we wanted was to be ordinary citizens. If the Japs and Germans didn’t kill us, it looked like white Mississippians would." He was rejected at the University of Mississippi law school and was very active in the NAACP. This invovlement could lead blacks to being called niggers, alligators, apes, coons, possums and was often equated with being a Communist.

Similar to the political maneuverings in Little Rock, the behind-the-scenes events among the Mississippi delegation and Lyndon B. Johnson's negotiations at the 1964 Democratic convention were insightful and fascinating.

I can't possibly summarize Freedom Summer in 1964 when blacks were trying to register to vote. Whites threatened economic reprisals even though at times the blacks were better educated than the whites registering them. It was a summer of violence when President Johnson was spending money on Vietnam while blacks were being killed. But black teenagers singing the Star Spangled Banner and the marches from Selma to Montgomery were a source of inspiration to many.

Williams noted that the decade between 1954 and 1964 saw more social change and more court decisions than any other decade. The lives of blacks and whites were forever changed because of the Brown vs. Board of Education decision in 1954, the Civil Rights Act of 1960, and the Voting Rights Act of 1965. Television forced the print press to be more honest. The white perspective was no longer the only one heard.

Listen to this audio snippet of the book and see what a fine job actor Sean Crisden did.

Leave me a comment by October 4 with your email address if you are new to my blog. Tantor Audio will provide a code for the winner to download the book.
at October 01, 2018

Wow, Carol. This book is a blast from the past! I remember the title well, so I'm pretty sure my father had this book in his library when I was growing up.

That's so cool, Dorothy. I bet you would really enjoy the book.

What an important book, Carol! Thank you so much for sharing with your readers. Please include my name for this giveaway.

This is such an interesting period for young people to learn about. I will pass on the giveaway. Thanks for the review. 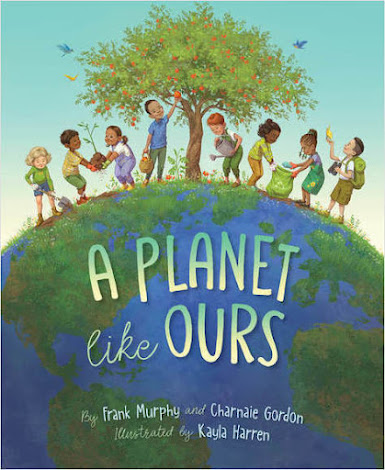