Congratulations to Joyce Hostetter who won the autographed copy of Darlene Jacobson's book, WHEELS OF CHANGE.

As promised several weeks ago, I want to share more about Vermelle Ely, one of my generous experts for Half-Truths, my WIP which takes place in Charlotte, NC in 1950.

As anyone who writes historical fiction knows, you can't use every detail you glean from your interviews--no matter how delicious it is. In no particular order, here are some of the snippets I learned from Vermelle which have informed Half-Truths. 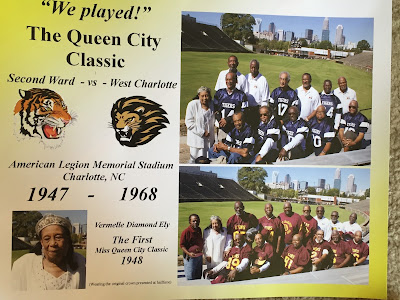 ********
Vermelle has struggled with poor eyesight for years and can no longer read printed material. Recently I read several chapters to her. You can imagine how pleased I was when she nodded and agreed with my descriptions and the characters' interactions. Sharp as ever, she made comments on what was true to life and what wasn't. Happily, she didn't find much that was inaccurate.

I am indebted to Vermelle and my other experts, who have shared their life stories so that my story is more authentic.

Fantastic interview Carol. Thanks for sharing. Having written a nonfiction, I know how important primary sources can be. But you do hold your breath as they read what you've written. I was so relieved when the 99-year old pilot approved the chapter on his bomber crash. Writing non-fiction or historical fiction is so interesting and just plain fun.

Thanks, Sandra! Yes, it is fun and you hold your breath at the same time!!

Dear Carol,
It was fun reading about your talk with Vermelle. It's wonderful that she has helped guide you and inform you about things that were true when she was a little girl.

I'm glad your story is getting closer to being published! I look forward to its publication day.

Thanks, Joan, for sharing this post and your encouragement. Yes, we are friends!!

What a beautiful friendship you've developed! So magical, the ways books help bring us together!

Wonderful post, Carol. Yes, research is so needed in any story to keep it accurate, but a historical novel needs to be factual. You've done a great shop with your research and keeping your story true! Can't wait to read it!

Thanks Sheri and Melodye. Glad you enjoyed the post.

Thanks so much, Linda!

Thanks so much for the book. I am excited and feel a little overwhelmed to have won twice so close together! But such great books!

I love reading about how you have tracked down these experts and now that I am reading the manuscript it is so cool to make the connections between your story and what you are learning from them. You've done some amazing research!

Thanks, Joyce. Yes, you have the inside track of Half Truths!

Congrats to Joyce! What a fun and interesting post. It's amazing to me every time I read about people serving their country being treated so poorly. Thanks for sharing this. It's great you've found such sharing people to help you with this story.

Thanks, Rosi. Next time I see Vermelle I'll read her this blog and I'm sure she'll enjoy your comment. She was a teacher for many, many years and truly did serve.

Half-Truth's journey to publication is a fabulous story in itself. Thank you for sharing so much of your research. These personal experiences have to have been life-enriching for you.

That is so kind of you, Bonnie. And yes--VERY life enriching. You're right!

Wow,Carol, I can hardly wait to read your book. It sounds fascinating, but I'm little confused about Vermelle's genetic heritage. You said her grandfather was from England and her grandmother was Native American, which most decidedly would have her be discriminated against, but why was her family considered African-American? Keep up the good work.

I know, I have some questions about Vermelle's heritage also, Sarah. These where her maternal great-grandparents. I'm almost postitive both of her parents were African American. Next time I talk to her I'll find out specifically and get back to you. Good question!

I loved your interview with Vermelle. These stories are so important and must be told again and again, lest we forget.

Thanks, Clara. I guess that's why you and I love historical fiction!!

Carol, I'm catching up on my reading and I just love this post! How wonderful that you could read some of your manuscript to her. I know the joy of having a person who is one of your sources to say you described something acurately in your writing! Her story and pictures are so fascinating. Thank you for sharing!!

Glad you enjoyed this interview, Kathleen.