Call Me Sunflower: A Review and ARC Giveaway

Congratulations to Sandra Warren who won the audio CD of WISH last week. Thanks to everyone who entered.

I seem to be on a roll with middle grade books featuring a girl protagonist who had to leave her home and wants to return. This week I am introducing CALL ME SUNFLOWER, Miriam Spitzer Franklin's second middle grade novel that comes out next month (SkyPony Press, 2017). 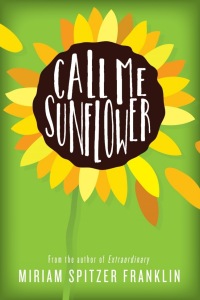 Like Charlie Reese in WISH who doesn't like her name Charlemagne, Sunny Beringer hates being called Sunflower. Both girls have difficulty coming into new schools and both identify with stray animals who they rescue. Both books include an older grandparent-type figure who factor into the girls' adjustments to their new homes. Similar set-ups and conclusions book end the two novels, but the plots are quite different.

Twelve-year-old Sunny has just moved to North Carolina from New Jersey with her mother and younger sister, Autumn, leaving behind Scott, a beloved father figure. Sunny's internal struggles are identified early on,


The whole move thing didn't make any sense to me. Mom had told me she needed a change--a break from her job--and the only way she could afford it was if we moved in with my rich grandmother in North Carolina. But Scott could have moved in with us in New Jersey instead of living in his own condo if we needed to cut down on expenses.

When I suggested that to Mom, she just repeated that it was time for a change.

If it were up to Mom, we could stay in North Carolina forever, and I'd barely get to see my dad at all. That's why it was so important to come up with the perfect plan, and soon. (pp. 5-6)

With that, the reader is introduced to the main plot: how is Sunny going to get her mother (who adopted her and Autumn as a single parent) and Scott back together.

At the same time that Sunny navigates being part of a Odyssey of the Mind team, missing her best friend and forming new friendships, plus figuring out how to respond to her proper grandmother who owns a fur store, she concocts one plan after another to help the people she identifies as her parents fall in love again. In the process of making a photo album for her mother's birthday, Sunny discovers a photo that uncovers a secret and opens her eyes to the true relationship between Scott and her mother.

An important sub-plot is Sunny's conflicts with her grandmother and her dislike for her store. When Sunny decides to join an animal rights group's "Fur-Free Friday" protest she starts down a path of secrets and lies. Her decisions lead to consequences spinning out of control until even her new friend Lydia, sees through her lies.

I sank down into an empty chair, dropping my head on my arms. There were mess-ups and there were mess-ups. This was the kind that just kept getting worse and worse. It was like the time I was mowing the grass and a rock hit the window. At first it was a little hole. Then I heard a crackling noise and lines started shooting down from the hole and, before I knew it, the glass shattered and the window fell into a million pieces.

Like Charlie in WISH, at the end of SUNFLOWER, Sunny realizes that her definition of family can be different than what she had grown up believing. After her grandmother takes Sunny's stray cat to the vet, the two of them talk.


"It gets pretty cold out there at night," Grandma Grace said. "She'll need to stay in the house, at least while she's recovering."

"Does that mean we can keep her?" Autumn asked.

I held my breath.

"Of course," Grandma Grace said. "Believe it or not, I happen to like cats."

"Don't be so surprised," Grandma Grace said with a wink. "Besides, we're already paying the vet bills so this cat is officially yours to keep."

"Thanks so much, Grandma Grace. I can't wait to bring her home."

I threw my arms around her and felt her arms encircling me, hugging me back. (p. 258)

My TBR list grows ever longer. This one sounds really good. Thanks for the review.

Thanks, Carol, for introducing us to, CALL ME SUNFLOWER. The book sounds like a good, solid MG read with an interesting sub-plot. My TBR stack is still teetering, so don't include me in the giveaway this time.

Kathy and Rosi, your names start the giveaway list. Thanks!

Thank you Carol for this post. I'm so very excited for Miriam and CALL ME SUNFLOWER! She's a talented writer, good friend, and fellow Sky Pony author :)

YEs, you Sky Pony authors get around! Adding your name to the list, Kathleen!

Dear Carol,
Thanks for your intriguing comparisons and review.

Thanks, Joan. You're in!