Browsing a recent Recorded Books catalog, I was pleased to find Wonderland (Farrar Strauss and Giroux, 2018), by North Carolina author, Barbara O' Connor. I hope one of your students, children, or grandchildren will enjoy it as much as I did. 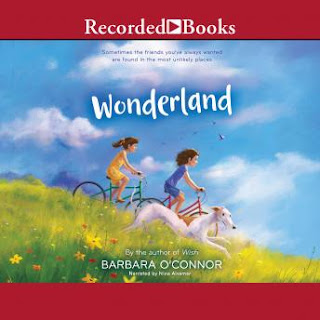 The book opens with10-year-old Mavis Jeeter leaving Hadley, Georgia for the same reason she's left so many other homes--her mother's job hasn't worked out and she decides it's time to move on. Mavis is brave and spunky--but because of their frequent moves, she never ends up having a best friend. The reader quickly figures out Mavis's internal goal: to live somewhere long enough that she can have a "true" best friend.

Therefore, when she meets Rose Tully, the shy daughter of her mother's new employer, Mavis announces, "You'll be my new best friend." Since Rose doesn't feel like she fits in with the other girls in their exclusive Magnolia Estates neighborhood, that suits her just fine.

The story sweetly shows their ups and downs in navigating this new friendship. Since Wonderland is written from multiple-POV's, the reader gets to see the agonies each girl suffers when they feel as if they've blown it with the other person. The author does a great job of showing their gaffes as well as how the two girls forgive one another.

The main conflict centers around Mr. Duffy, the elderly gatekeeper at Magnolia Estates whose dog recently died. Since Queenie's death, Mr. Duffy has become depressed and increasingly forgetful. Rose and Mavis love Mr. Duffy and fear that he's in danger of losing his job. When Rose's arch-enemy, Amanda, discovers a loose dog in the woods behind her house, Mavis is convinced that "Henry" (as Amanda names him) is the answer to all of Mr. Duffy's problems.

The story has a happy ending--Mavis proves to be right--but there are enough obstacles that get in the way of that perfect solution to make the story interesting for elementary school girls.

A neat addition to this friendship story is that Henry has his own POV. Readers will enjoy "hearing" Henry's thoughts and "feeling" his emotions as the greyhound longs for freedom and a person of his own to love him.

I asked Barbara about her reason for including Henry as a POV character and she said,


I know that most kids love dogs and have no problem thinking of them as an actual character in a story. I needed Henry (the dog) in order to add another emotional layer to the story. I needed the reader to know Henry’s feelings and motivations for his actions. Having a third POV character also kept the story moving forward but in differing, yet parallel, ways.

I enjoyed Mavis's child-like optimism that her plans would work and her persistence to come up with a "Plan B" when they didn't. In the end, she has gained what she wanted--but not exactly in the way she had expected. Rose's character arc--from a shy, quiet girl to a brave 5th grader who speaks her mind to her mother--is believable and worth cheering for.

Besides Rose, Mavis, and Henry, the secondary characters including Mr. Duffy and the two mothers are well developed. Mr. Duffy's colorful language, Ms. Jeeter's petulant complaining, and Mrs. Tully's constant criticisms of her daughter and Mr. Duffy, show all these secondary characters well--and serve both Mavis's and Rose's journeys.

The story will help young readers to consider what truly makes a best friend. In the end, as all three main characters reach a new normal I thought, "Is this Rose, Mavis's or Henry’s story?"

That will be for the reader to decide.

I am giving this book away in conjunction with the winter issue of Talking Story in which Barbara is our expert. Leave a comment here and I'll enter your name once. Leave it through the newsletter and you'll have two chances to win. Hurry! Giveaway ends January 21.

Here is an audio excerpt as a teaser.

Sounds like a book that would shed light on something many kids haven't experienced. I love the internal goal!

My 10-year-old granddaughter has been sharing her "girl drama" issues with me, and I think this would be a perfect fit for her at school right now! I'm glad there are such books to help our grands learn how to navigate all kinds of friendships.

Thanks Theresa and Linda. Your names start the list!

Wonderland! I think we'd all like to be in our own created wonderland! Thanks for sharing!

Thanks, JOan. You're in!

As a child, I often felt like I didn’t have a best friend...nice to see a book that addresses this.